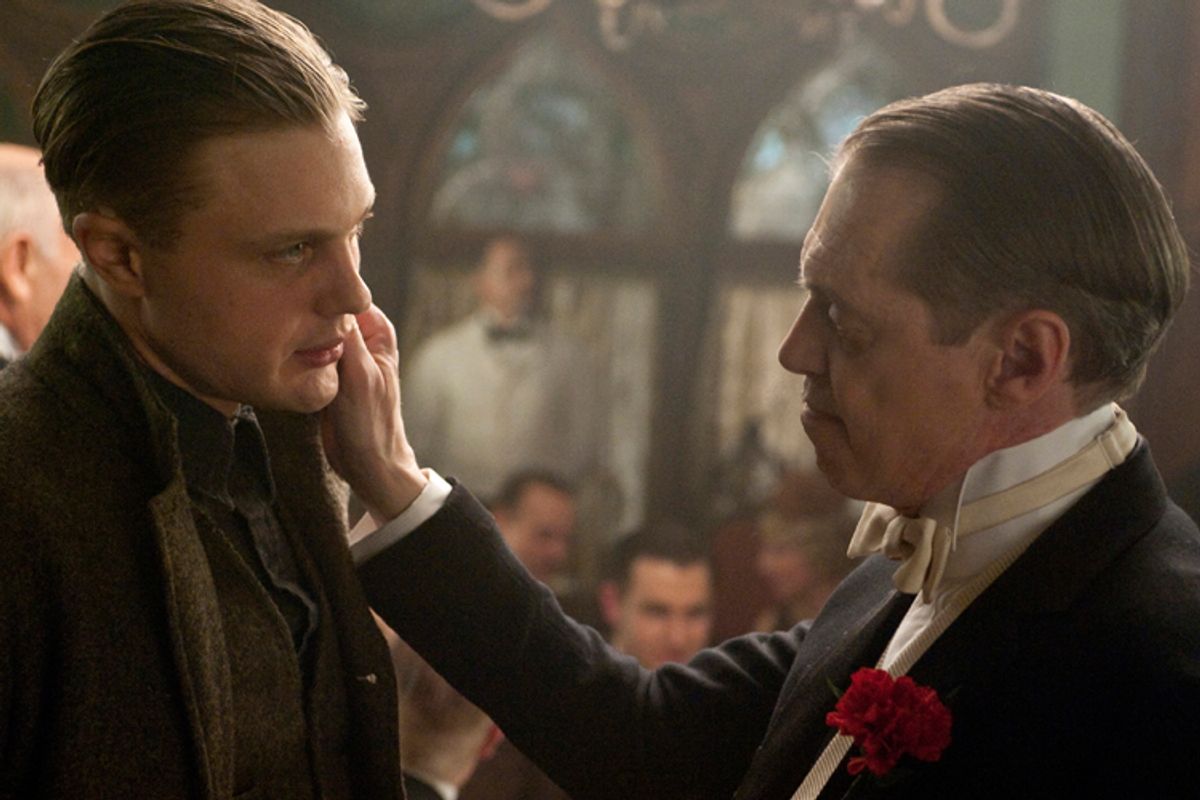 "Without the continued support of good, decent women like you, men like me would be nowhere." This is Nucky Thompson (Steve Buscemi) of HBO's new series "Boardwalk Empire" (premieres 9 p.m. Sunday, September 19), telling a crowd from the Women's Temperance League exactly what they want to hear. But behind the scenes, Nucky thinks good, decent women and other rule-followers and idealists are flat-out suckers, while realists (himself included) recognize that most people are simply governed by what they need. As Atlantic City's treasurer on the eve of prohibition, Nucky figures that the laws against alcohol are merely likely to raise the price per bottle, and he waves off the federal agents charged with enforcing the ban as powerless "dog catchers with badges." "We got a product a fella's gotta have," he explains to his fellow council members and city officials, most of whom soon join him in celebrating the new law with -- what else? -- a huge, champagne-soaked party.

Perhaps taking its cue from Nucky, HBO is now focused on giving the people what they want: more gangsters. After a long dry spell in the wake of "The Sopranos," the network is finally offering up the kind of drama that a wide audience can sink its teeth into, created by prominent "Sopranos" scribe Terence Winter with a pilot episode directed by Martin Scorsese. And one week before the show's highly anticipated premiere, a little celebration seems justifiable; it's hard to think of a series that's looked more likely to succeed. From its breathtaking cinematography to its meticulous period costumes to its smart, snappy dialogue to its talented cast, "Boardwalk Empire" presents a TV program that's so polished and beautifully executed, each episode feels as rich and memorable as its own little Scorsese film. In fact, the Academy should save itself a little time and effort and just roll a big truck full of Emmy statuettes over to the "Boardwalk Empire" studios right now.

This would be Nucky's rather pragmatic approach to the problem, at any rate. But as the contagious delirium of his big Prohibition party gives way to tense meetings between notable gangsters and uneasy agreements between opposing factions, Nucky finds that skipping right to the part where he and his boys are swimming in cash isn't always as easy as it first appears. There are a lot of people to please out there — gamblers, drunks, black voters, the Women's Temperance League — and that's not to mention girlfriends, business associates, the feds and a few disgruntled individuals that are making life particularly difficult for him. Soon, Nucky's swagger yields to a more jittery reality. With the Volstead Act in place, he's not merely dealing with gangsters; he is a gangster.

This uncertain territory is exactly where Steve Buscemi shines, of course. From his watery eyes to the hesitant set of his jaw, Buscemi brings a transfixing uneasiness to his role as Nucky Thompson. Every glimmer of doubt or twinge of regret is immediately visible on his face. With a more traditionally handsome lead, we'd never experience Nucky's slippery descent into criminal dealings quite so palpably. And as viewers, we understand immediately that this isn't a heroic figure (or even an antihero), endowed with the sorts of great decision-making skills or the grand vision of most historical lead characters, whether they're politicians or petty thieves. Nucky is a right-place, right-time opportunist, the kind of malleable guy who doesn't necessarily outsmart everyone around him, but who's willing to teeter along that thin line between respectability and corruption as needed to maintain the status quo. Once the initial celebratory mood subsides, of course, Nucky finds himself fumbling along in the sort of beleaguered haze that afflicts those with too many competing roles to juggle. Even as we can see straight through to his pure intentions, we can also recognize his inherent lack of conviction for anything that might stand in the way of business. He's not lovable, exactly, but he is sympathetic, and strangely mesmerizing.

In other words, he's the polar opposite of Don Draper: twitchy and unnerved and bug-eyed on the outside, but resilient, flexible and downright tenacious just below the surface. Where we sometimes suspect that Draper is a hollow, unprincipled man at his core, we can imagine that, if he were born into another life, Nucky might eke out a happy existence as a placid accountant or family man. Circumstances, however, have placed him in a role that he can no longer occupy successfully without cutting away pieces of his soul.

Many of the characters in "Boardwalk Empire" find themselves in similar circumstances over the course of the first half of the 12-episode first season. Based on Nelson Johnson's book "Boardwalk Empire: The Birth, High Times, and Corruption of Atlantic City," the show explores the ethical dilemmas and misadventures of a handful of individuals trying to find their place in an increasingly unpredictable world. From Margaret Schroeder (Kelly Macdonald), an Irish immigrant whose husband's gambling is threatening to pull her family apart, to Gillian Darmody (Gretchen Mol) a showgirl who finds herself caught up in a dangerous romance, the series repeatedly explores the question of how much each character is willing to compromise principles for the sake of survival.

If you've ever seen "Goodfellas" or any episode of "The Sopranos," a lot about the style and the storylines will feel familiar here. The sly sense of humor, the quick banter, the suspenseful little exchanges that end badly and the others that merely contribute to a growing feeling of dread — all of it can feel like a déjà vu, but only because this is a truly sure-footed show, crafted by some of the best, most experienced writers and directors in the business. I was joking about the truck full of Emmys, but after watching a few episodes, the inevitability of a long and celebrated life for this series becomes obvious.

One of the unexpected joys of "Boardwalk Empire," though, lies in the way the show revels in the oddities of its time, peeling back the layers of polite society to reveal a giddy shadow world of criminals and politicians collaborating to keep the liquor flowing. As the old system crumbles, it challenges the bonds between rivals and friends, and new alliances are formed as a more chaotic age dawns. Just as you think you understand a particular character or a situation, the ground shifts underneath you. Every shared code and assumption and all of the structures holding straight life together are eroding, and everyone is forced to make peace with the upheaval, or swim tirelessly against the tide.

How accurate is this story? Al Capone appears side by side with the fictional Jimmy Darmody, as do Lucky Luciano and other known gangsters of the era. Nucky is based on a real Nucky (last name Johnson) who, according to a HitFix interview with Terence Winter, "sort of organized organized crime," but many of the stories about him are invented. For an understanding of the guiding principles here for mixing fact and fiction, look no further than Nucky himself for further insight: "First rule of politics, kiddo: Never let the truth get in the way of a good story."'

Sky-high expectations aside, that's what "Boardwalk Empire" promises more than anything else: a good story. Are we on board? You bet your bottom dollar we are.