Tom Goldstein and the perils of conflict-plagued commentary 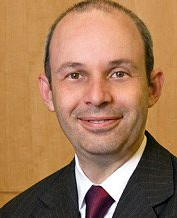 Back in April, I wrote in detail about the glaring conflict infecting the Supreme Court nominee analysis of SCOTUSblog's Tom Goldstein.  Goldstein's lucrative partnership at Akin, Gump -- as has been true for his whole career -- depends almost exclusively on aggressively promoting himself as a specialist in Supreme Court litigation (NBC is even developing a new entertainment show based on his career called "Tommy Supreme").  Therefore, quite unsurprisingly, he invariably takes the lead role in heaping obsequious praise on every nominee to the Court, while attacking and mocking all of the nominee's critics as ideological extremists, so that when the nominee arrives on the Court and Goldstein appears before them, the new Justice is looking at his or her leading public champion.  While he's often presented as some sort of objective sage when it comes to Supreme Court nominees, the reality is that you wind Tom Goldstein up and he dutifully lavishes prospective Court nominees with the same set of embarrassingly reverent adjectives ("absolutely brilliant," "honorable," "calls things straight") while deriding critics with a slew of Broderian insult-clichés:  they're fringe, Unserious ideologues and extremists, etc. etc.  Given how dependent he is on these Justices, why would anyone expect him to do anything else?

Today we have one particularly glaring example of how misleading his pretense to objectivity can be.  One of the principal concerns expressed about Elena Kagan's nomination was that, due to her extensive involvement as Solicitor General in numerous Obama administration policies and legal positions, she would end up recusing herself from an exceptionally high number of cases that came before the Supreme Court, leaving the Court stuck with a 4-4 deadlock and without any way to resolve cases.  Those raising this concern pointed to the very high recusal rate for the last Solicitor General appointed to the Court, Thurgood Marshall.  Progressives were deeply concerned about this because it would mean that they would be missing a Democratic-appointed vote on a slew of important cases, while people across the spectrum were concerned because a 4-4 vote means that lower court appellate decisions remain valid.

Goldstein, needless to say, found such concerns utterly unfounded and unfair.  On April 18, he wrote a long and detailed analysis -- which he vested with a ludicrous tone of mathematical certainty -- in which he insisted that Kagan's recusal rate would actually be quite normal, nothing unusual, and thus recusal concerns were baseless:

Commentators have recently asserted that if Elena Kagan were nominated, she would have to recuse herself from a large proportion of the Supreme Court’s merits docket over the course of the next two to three Terms. This recusal issue arises from an extrapolation from the large number of recusals by the last Solicitor General to transition to the Supreme Court, Thurgood Marshall. That extrapolation rests on an intuitive hypothesis, but part of the problem with the blogosphere is that hypothesis too often gets published as fact. It turns out that in reality the parallel between Kagan and Marshall is not sound for a few independent reasons that combine to significant effect.

In no particular order, Kagan would have far fewer recusals principally because (i) she would be appointed earlier in the year, (ii) the Court’s docket has fewer merits cases with the United States as a party, and (iii) a substantial amount of the time Marshall recused for reasons other than his service as Solicitor General. . . . .

In sum, I would expect a total of 13 recusals -- 3 pending merits cases, 1 incoming merits amicus brief, 1 CVSG, 3 pending cert petitions, 2 pending briefs in opposition, and 3 appeal recommendations -- if Elena Kagan were nominated on May 1. If the nomination occurred on May 15, it would be closer to 15. That is roughly one-fifth to one-sixth of the merits docket, nowhere near the number or proportion of cases in which Marshall recused himself. . . .

[Ed Whelan's] prior assertion and that of other commentators that she would be recused from a large number of cases is deeply flawed. This isn’t a hypothetical exercise: generally speaking, it’s possible to identify the precise cases in which she would be, or likely could be, recused. And the numbers are not particularly large.

So Goldstein mocked the idea that Kagan's recusal rate would be anywhere near Marhsall's, and -- donning the voice of some sort of hyper-confident statisician (in contrast to those reckless screechers "in the blogosphere") -- insisted that she would recuse herself in exactly 13 cases, 15 at the most, for the entire first-year term, at a rate of "roughly one-fifth to one-sixth of the merits docket."

For the October, 2010 term, the Supreme Court has now accepted a total of 40 cases -- just a portion of what it will accept for the first term -- and look at what has happened with Kagan's recusals, from The Wall Street Journal's Ashby Jones yesterday:

When President Obama nominated Elena Kagan to the Supreme Court in May, we and many others reported out that she’d likely have to recuse herself from a handful of cases for the upcoming term. . . .

But we never dreamed that Kagan would recuse herself from half the cases for the upcoming term. But it seems that’s where we are, at least for now. Kagan this week, in the words of National Law Journal reporter Tony Mauro, "quietly" recused herself from 10 more cases to be argued in the upcoming term. That brings the number of cases from which she’s recused herself to 21. As Mauro points out, that's more than half of the 40 cases the court has so far agreed to hear. . . .

So what does this mean for the court? Unless and until a recusal contingency plan (like this one) is put into place, the court will be stuck with just eight justices in each of the cases.

In other words, the Supreme Court is just part of the way into the first term, and the number of Kagan's recusals already significantly exceeds what Goldstein pronounced we could know more or less for certain would be the number for the entire term.  And her more-than-50% rate of recusal thus far tracks Marshall's recusal rate for his first term:  the comparison Goldstein mocked as nothing but the reckless rantings from blogosphere ignoramuses.  Ed Whelan -- who was the target of Goldstein's specific ire on the recusal issue and (along with me) generally derided as nothing but a blind, raving Internet ideologue for criticizing Kagan -- takes a well-deserved victory lap here.

I seriously doubt Tom Goldstein will be embarrassed by being completely wrong here, notwithstanding the intemperate language he used to praise his views as the by-product of statistical certainty and to scorn the recusal concerns as nothing but the ill-informed recklessness that oozes from the blogosphere (someone should tell Goldstein what the last syllable of "SCOTUSblog" signifies).  That's because Goldstein's objective here was fulfilled no matter how wrong he was:   just as he did with John Roberts and Sam Alito, he served as Kagan's most adoring defender.  That's probably a good thing to do for Goldstein's law partnership at Akin Gump, but it's not very good for those who end up subjected to Goldstein's commentary, invariably presented in media venues as objective expertise when it is anything but that.