How to buy, roast and peel beets

Once relegated to cans, this root could become the King of Vegetables in your kitchen. Just roast it 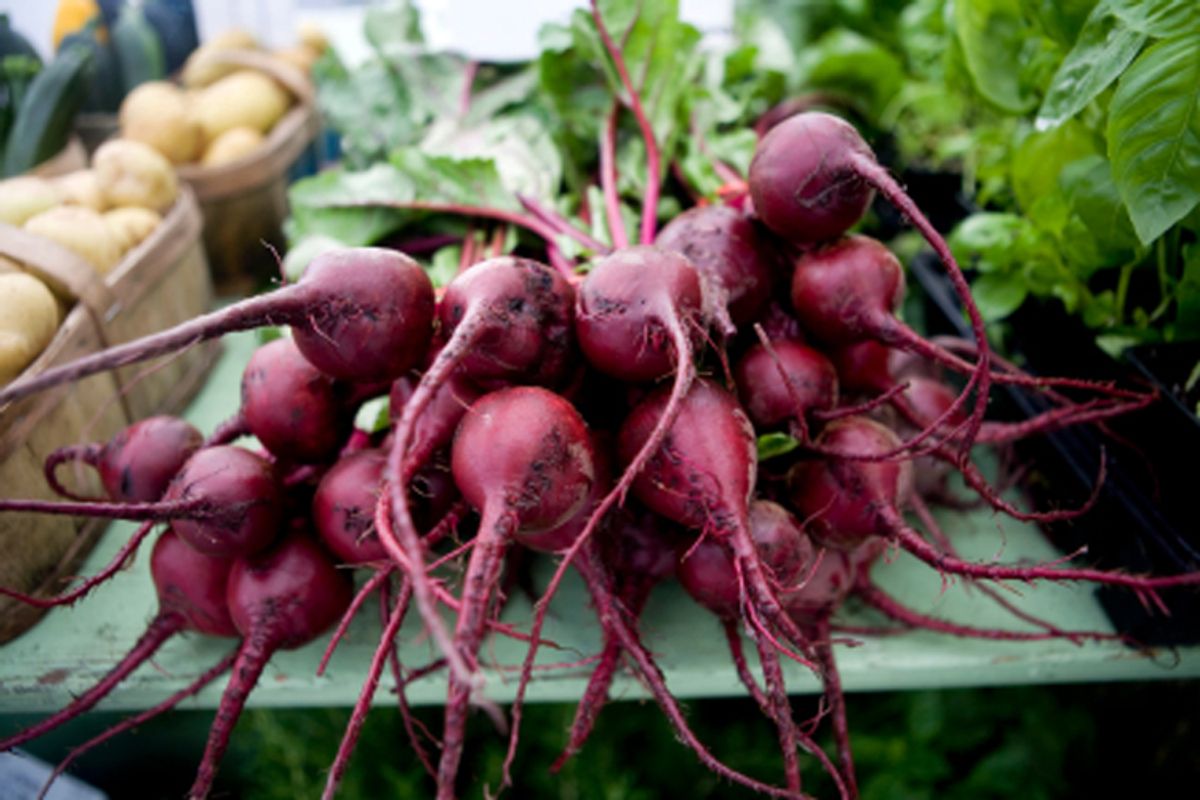 Of all the subjects in the kingdom of vegetables, I can't think of one whose image has been rehabilitated more completely than the beet. It wasn't terribly long ago that beets were to be found only on buffet salad bars, freed from their cans and bobbing in disturbingly purple pickle juice. You've seen it — that dank magenta pool next to the bins of shredded cheese and yellowing broccoli florets. Weirdly sweet, weirdly sour and staining everything that looked at it funny, it's the stuff of folic acid nightmares. Aside from your grandparents, who ever ate them? They were fuddy-duddy food.

But then I was cooking years ago in a great restaurant, when my line-cook hero Scottie bounded into work one day, smiling wide. "Did you see?" he asked. "The beets are coming in!"

Scottie had rock star hair, totally sweet tattoos, and cooked like a leashed tornado. When I finally left town, he gave me a prized possession — his first Sepultura album. All this is to say that he is a not a fuddy-duddy. And he hailed beets, in no uncertain terms, as the King of Vegetables.

Once I ate the beets he was talking about, fresh and freshly roasted, I understood. Sweet but profoundly complex, they tasted like geology. They tasted like the earth, though the earth was not something I'd ever thought I'd wanted to taste. But the way they resisted the bite just slightly, the way they gave off that mellow juice, the way they revealed their sugar ... they made me realize not just that I loved them, but also that there is so much to love in vegetables. It may have been that bite of beet that forever changed me into a true vegetable lover.

As I've been looking around since then, it seems that beets have quietly taken over America. Roasted beet salads -- most often paired with goat cheese and walnuts -- have invaded so many restaurant menus that they first became a cliché and then outlived the cliché, now sitting happily alongside chicken and grilled steaks as Things That Cannot Leave the Menu.

But it's often confusing to make them at home — they're difficult to peel, they stain everything they touch, and they get hard and burnt when you try to roast them like other vegetables. But keeping just a few things in mind will give you the keys to this kingdom.

How to choose beets at the market, and how to store them

Beets store really well, which is why you see them year-round and why they're often thought of as a fall and winter food. But they're at their best when truly in season, from early to mid-summer through mid-autumn. When you find them with the tops still attached, look first at how the greens look. If they're vibrant, deep green, bright and firm, that's a great sign; it means these are freshly dug. And it means the tops themselves will be great for eating — treat them as you would Swiss chard or other cooking green.

Don't fret too much if the greens are missing or look a little yellowed or sorry, though; the beet can still be great. In this case, focus on the root itself. It should be smooth-skinned, not wrinkly. It should be firm, actually hard to the touch. Try to avoid ones with really hairy-looking stems. And you want the size to be between 1½i and 3 inches in diameter. Larger beets may still be good, but they take a long time to cook through, and worse, they may be old and woody. (Eating an old, woody beet is a torture.)

When you get home, cut the greens off, up to about an inch from the root; if left on, they will draw moisture away from the beet. If the greens are in good condition, they will keep for a few days in the fridge; the root can keep for weeks (though they're best within the first week or so).

How to peel beets

OK, what I mean by that is not to peel them until after cooking, when the skins should slip off easily. The skin also protects the juice and color (and your hands and clothes) from bleeding all over the place.

Flavors to pair with beets

Beets, walnuts, goat cheese and a light vinaigrette are a classic for a reason, and while I may tire of seeing them on restaurant menus, I won't tire of eating them together. But beets are surprisingly versatile; I find that if I add something acidic to heighten their sweetness and something rich to round it out, lots of flavors from lots of culinary traditions work wonderfully — from the Mediterranean to northern and eastern Europe and beyond. Here are some of my (current) favorite combinations; of course, all of these can be adjusted to your personal taste:

This is the technique Scottie and I learned at Higgins restaurant in Portland, Ore. It's a great basic method for cooking beets, though it doesn't, on its own, give you the caramelized flavors one often expects from "roasting." Because beets are so hard and dense, it's best to cook them with a little steam to keep them from burning. If you want that caramelization, follow the steps below. The spices, too, add a wonderful, subtle background note to the beets but are not strictly necessary.