Amid anti-Islamic incidents, the President commemorates the attack's anniversary with solidarity speech 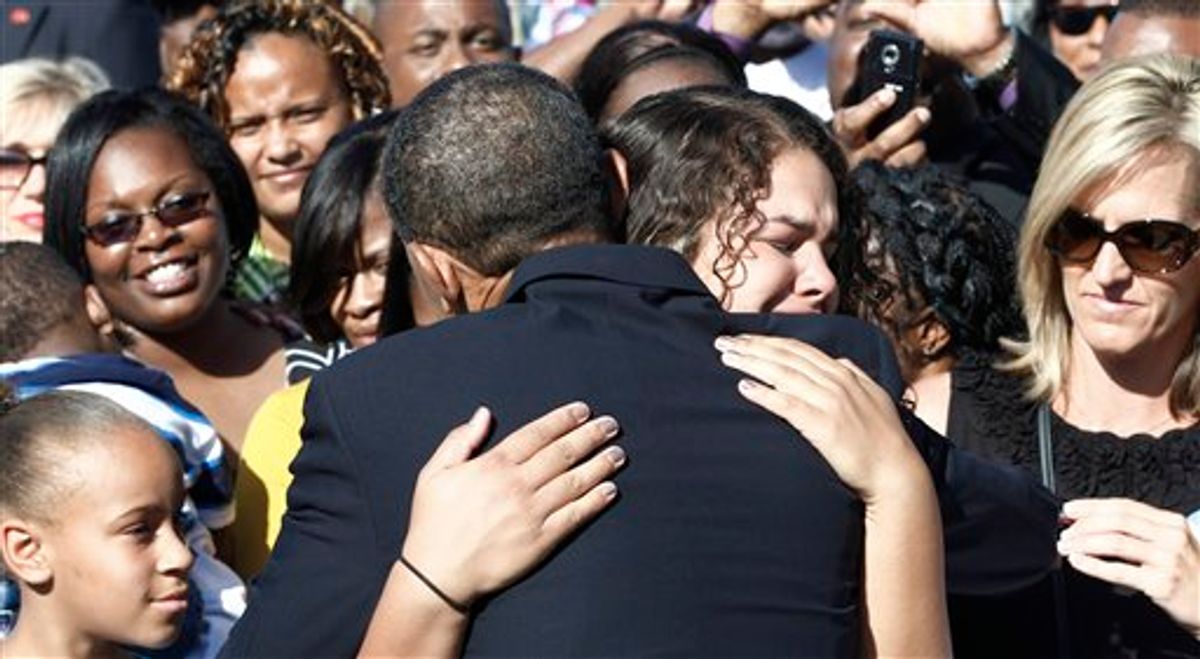 Amid an atmosphere of unease, President Barack Obama wants Americans to mark the ninth anniversary of the Sept. 11 attacks by recapturing the sense of common purpose felt on that dreadful day.

"If there is a lesson to be drawn on this anniversary, it is this: We are one nation -- one people -- bound not only by grief, but by a set of common ideals," the president said Saturday in his weekly radio and Internet address.

"By giving back to our communities, by serving people in need, we reaffirm our ideals -- in defiance of those who would do us grave harm."

Obama himself was marking the day nearly 3,000 people died in terrorist jetliner attacks with a moment of silence at 8:46 a.m., the time the first plane hit the World Trade Center in New York City. The president also planned to attend a memorial service at the Pentagon and participate in a service project in the Washington area.

First lady Michelle Obama was to join former first lady Laura Bush in Shanksville, Pa., where the fourth plane crashed after passengers rushed the cockpit. Vice President Joe Biden is in New York for the service at ground zero.

But this year's remembrances take place in an unusually tense environment, amid growing public suspicion of Muslims and controversies over an Islamic community center and mosque planned near ground zero and a Florida pastor's threat to burn Qurans.

After some wavering, the Rev. Terry Jones backed away from his inflammatory plan to burn the Muslim holy book, saying on NBC's "Today" show Saturday that "God is telling us to stop."

In New York, protests were planned by supporters and opponents of the proposed mosque.

Obama alluded in his radio address to the contentious atmosphere, though without specifically addressing either controversy.

"This is a time of difficulty for our country," Obama said. "And it is often in such moments that some try to stoke bitterness -- to divide us based on our differences, to blind us to what we have in common.

"But on this day, we are reminded that at our best, we do not give in to this temptation," Obama said. "We stand with one another. We fight alongside one another. We do not allow ourselves to be defined by fear, but by the hopes we have for our families, for our nation, and for a brighter future."

At a White House news conference Friday Obama denounced the threatened Quran burning, said Muslims have the same right as any other religion to build near ground zero and issued a full-throated appeal for religious tolerance, reminding Americans: "We are not at war against Islam."

In the GOP's weekly address, Sen. Jon Kyl, R-Ariz., echoed Obama's plea for a common purpose. Kyl called for the country to "recapture the unity that allowed us to come together as a nation to confront a determined enemy."

But without mentioning the president by name, Kyl seemed to question the Obama administration's commitment to the war on terror begun by his predecessor, George W. Bush. Obama recently declared an end to combat missions in Iraq even as he pledged to renew efforts to prosecute the war in Afghanistan and pursue al-Qaida terrorists.

"The fact that none of the subsequent attempts to attack us have succeeded seems to have removed some of the urgency and commitment so necessary to succeed in war," Kyl said.

Secretary of State Hillary Rodham Clinton, in a statement honoring the victims of "that terrible day," said memories of the attacks "remain searingly vivid."

"We remember the pain of loss, but also the pride in our people and our country," she said.