Chris Christie and the GOP's 2012 vacuum

When the first-year governor of New Jersey outshines your party's top White House prospects, you've got a problem 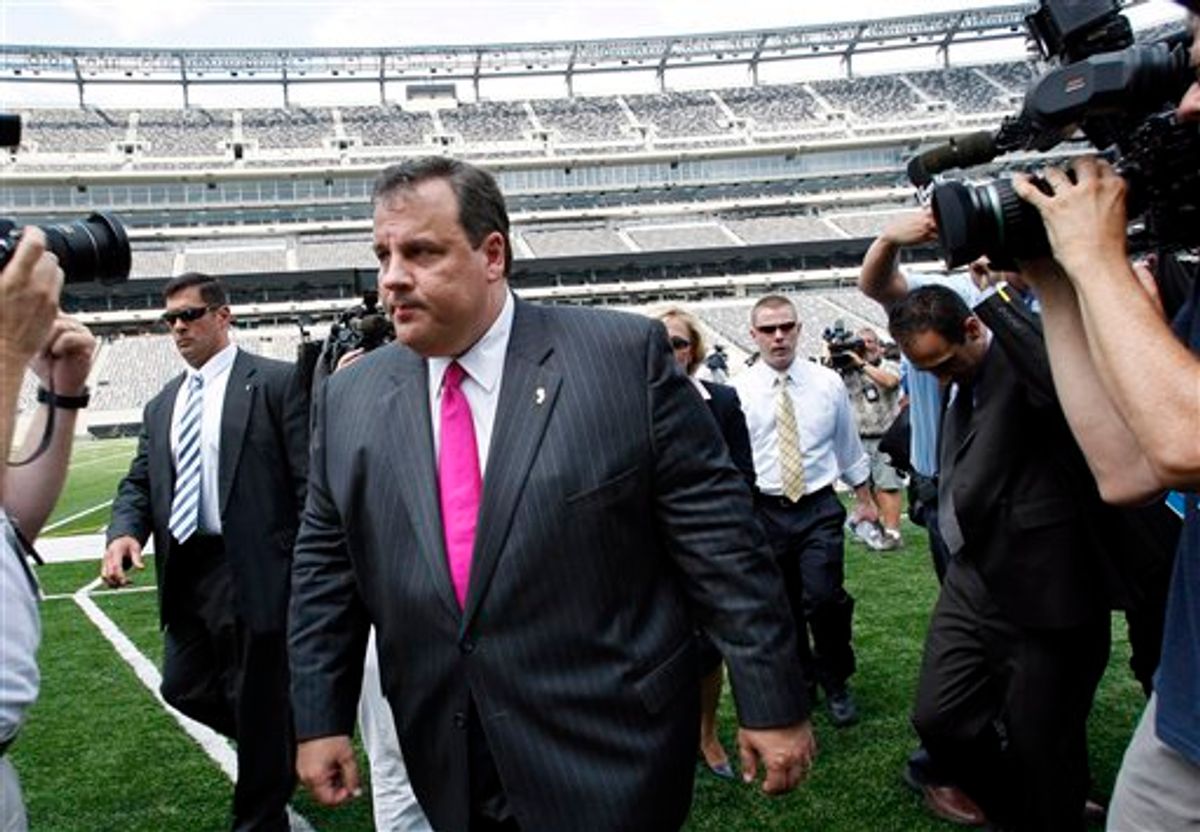 All discussions of the Republican Party’s chances of reclaiming the White House in November 2012 should begin with a simple stipulation: If the economy rebounds significantly between now and then, it doesn’t matter whom the GOP nominates -- Barack Obama will be reelected.

But even if it doesn’t, the GOP won’t necessarily be home free. Put up the wrong candidate and Republicans will give Obama an opportunity to paint their standard-bearer as an unacceptable and extreme risk -- to turn the race into a referendum on the GOP nominee as much as one on the incumbent president and, perhaps, to grind out a victory in spite of woeful economic conditions. Think of how Sharron Angle’s liabilities have helped Harry Reid -- who is currently locked in a dead-even reelection race in Nevada despite ghastly personal poll numbers -- defy political gravity: This dynamic will be Obama’s only hope if the economy isn’t revived by ’12.

This is where things get tricky for Republicans. It’s still early, obviously, but the party seems to be facing a difficult dilemma: None of its presumed candidates seem to possess broad enough appeal within the party and broad enough potential appeal with the general election audience to win both the nomination and the November election.

Take the GOP’s three unofficial front-runners. Sarah Palin commands deep affection from the party’s base, potentially enough to score key early victories in Iowa and South Carolina, especially in a crowded field. But outside of the GOP base, Palin is a profoundly damaged political commodity -- the national equivalent of Sharron Angle, if there is one. Mike Huckabee could also score in Iowa (as he did in 2008) and South Carolina, but he too would be an intensely flawed nominee -- comically easy for Team Obama to caricature as a religious extremist. And then there’s Mitt Romney, who’d be stronger in the fall than Palin or Huckabee, but whose Mormonism and thoroughly unconvincing transformation into a right-wing ideologue severely complicate his primary season outlook.

The second-tier prospects seem equally handicapped. Tim Pawlenty is trying hard -- too hard -- to engineer the same kind of transformation that Romney has been attempting. He’s a fundamentally uninteresting character who lacks the uniqueness that a long shot must have in order to break out. Haley Barbour, with his Southern folksiness, is more colorful -- but will the GOP really nominate someone who reeks of the Old South to run against the nation’s first black president? Mitch Daniels has the blessing of a handful of think tank wonks but nothing else, and Bobby Jindal has shown himself to be an epically awkward communicator. And Newt Gingrich? Let’s not even pretend he’s serious about running (although, if he is, he’d probably be the Republican Obama would most like to run against, besides Palin).

In other words, the opportunity (at least from this vantage point, two years out) could well be there for the GOP in 2012 -- and they may end up flubbing it. Which is why I found myself watching one of the last week’s most widely circulated YouTube clips and wondering if the first-year governor of New Jersey might actually think seriously about jumping in the race.

In the clip, Chris Christie fields a hostile question from a public school teacher who is upset both with his budget cuts and his aggressive finger-pointing at the state teachers union. He responds with a masterful eight-minute soliloquy that is as blunt as it is mesmerizing, defending his budget priorities and drawing a distinction between individual teachers and the Big, Bad Teachers Union. You needn’t agree with Christie’s policy points to recognize what a masterful performance he puts on, one that calls to mind stylistically President Obama’s "questions time" session with House Republicans earlier this year.

Nor was this the first time this year that Christie’s arresting off-the-cuff style has won him national notice, and an outpouring of adulation from conservatives who are blown away by his ability to express himself so compellingly. Simply put, Chris Christie is -- by far -- the most effective communicator in the Republican Party today. In a way none of the other ’12 contenders can, he causes the casual viewer to sit up and take notice when he fields questions at press conferences or in sit-down interviews -- a weird but powerful mix of polish and working-stiff appeal.

Moreover, the theme of his governorship -- austerity through war with public sector unions and entrenched interest groups in a state capitol that’s been run for decades by free-spending Democrats and Republicans -- is tailor-made for today’s national GOP base.

Still, the idea of a Christie presidential campaign is far-fetched -- or at least it should be. But here the talent vacuum comes into play. Traditionally, a first-year governor like Christie would be regarded only as an outside-the-box running-mate prospect for the next presidential election -- someone whose own campaign for the top of the ticket would have to wait a cycle or two. But traditionally, the field for the next presidential race isn’t littered with as many glaringly deficient candidates as the 2012 race is. So while it’s easy to say Christie’s limited experience should disqualify him as a serious candidate, it’s a lot harder to watch last week’s YouTube video and argue that he has no business being on the same stage as Romney, Huckabee, Palin and the rest.

Christie, of course, has publicly dismissed the idea of a ’12 campaign whenever it’s been floated this year. At first, I’m sure this was entirely sincere -- just as Barack Obama was entirely sincere when he spent his first year in the Senate swearing up and down that running for president in 2008 was a kooky idea. Obama changed his mind when the party faithful greeted him like a rock star on the 2006 midterm campaign trail. Those adoring Democrats, he realized, weren’t going to reject him just because he had 32 fewer years of Senate experience than Joe Biden. I wonder if, every time he hits the YouTube jackpot or Rush Limbaugh sings his praises, Christie doesn’t find himself starting to think the same way.

Granted, Christie isn’t quite stirring Obama levels of fervor among Republicans. And if he were to run, he’d have some ideological vulnerabilities, chiefly on immigration. His administration's recent bungling of its "Race to the Top" application is also a wild card,  although it's hard to see it tarnishing Christie's image with national conservatives.  At the same time, it’s worth noting that on the one litmus test issue that usually disqualifies blue state Republicans from national office -- abortion -- he is in line with the right. Overall, Christie, at least on paper, comes closer to possessing the magic formula -- broadly acceptable to the party base and appealing to a general election audience -- than any of the GOP’s potential presidential candidates.

Will he end up running? I still doubt it. But that a Christie candidacy makes as much sense as it does says plenty about the Republicans who are likely to run.