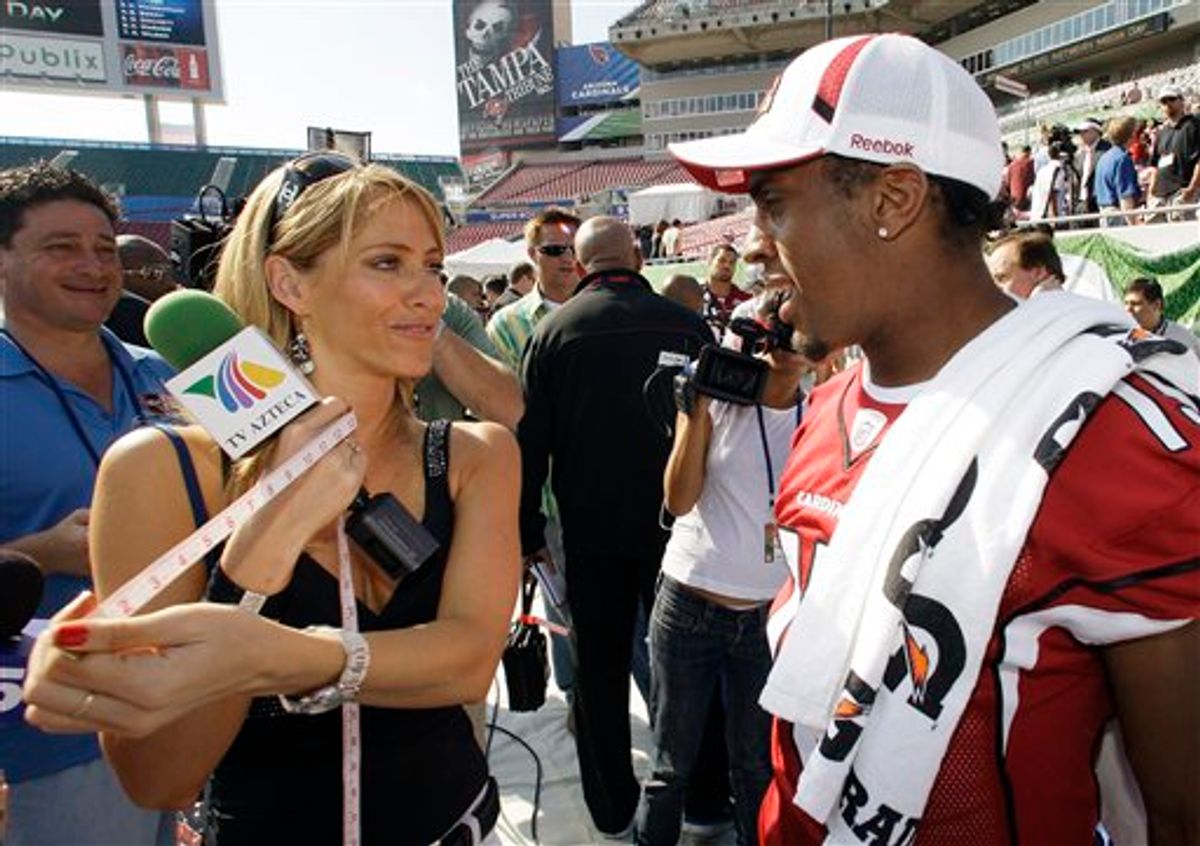 FILE - This Jan. 27, 2009, file photo shows TV Azteca reporter Ines Sainz, left, after measuring the bicep of Arizona Cardinals wide receiver Steve Breaston, right, during the team's media day for Super Bowl XLIII, in Tampa, Fla. Sainz says on her Twitter account she felt "very uncomfortable!" at a Jets practice Saturday where a coach appeared to throw footballs in her direction and players called out to her in the locker room. (AP Photo/Ross D. Franklin, File) (AP)
--

I was going to hold off on writing about the alleged harassment of TV Azteca reporter Ines Saintz by The New York Jets until more information emerged. After all, at this point it's mostly hearsay: The NFL is investigating reports that during practice on Saturday footballs were intentionally thrown in Sainz's direction and that in the locker room she was "greeted by catcalls and hooting," according to ESPN. Ah, but then, by way of Media Matters, I came across The Daily Caller's shaming coverage -- or, more accurately, uncoverage.

Tucker Carlson's conservative news site has a slideshow headlined "Baby got back: Meet Ines Sainz" with an array of racy images (that certainly casts "conservative" in an interesting light). The photos of the former Miss Universe contestant are paired with belittling commentary -- por ejemplo, an image of Sainz shot from behind on the day in question is accompanied by the following text: "The skin tight jeans -- er, we mean, the sensible outfit that sparked the current controversy." Some other choice captions include: "Hello, Ines! My, what a serious photo you have to headline your website!" and "Sainz's dressing for success recipe: Low cut lacey top? Check. Necklace with strange white [jewelry] drawing the eye to her chest? Check." The message is so tired I am actually yawning as I type: She asked for it.

Some folks just have a really hard time with the concept that a woman who cashes in on her sex appeal can actually be harassed, violated and abused (see: Erin Andrews). Interestingly enough, Sainz isn't leading the charge here. It's true that she tweeted about the locker room incident in Spanish: "I die of embarrassment! I am in the locker room of the Jets waiting for Mark Sanchez while trying not to look to anywhere!" But, on Monday, she told a TV Azteca colleague: "It was definitely a joking tone, very amicable. I wasn't offended." As for the footballs thrown in her direction, she said: "I took it as a joke, and none of the footballs actually hit me."

She was so untroubled, in fact, that she was "surprised to wake up on Sunday and have a call from the NFL." Sainz had to ask what they were calling about "and they said, well, there is a pretty powerful accusation of harassment." Apparently, Sainz was unaware of some of what was said about her in the locker room until a fellow female reporter told her about it. Still, she told the Spanish program DeporTV: "In my opinion, I never felt I was attacked." On that note, I'd like to offer a thank you to The Daily Caller for providing our lesson of the day: You can wind up on the other end of victim-blaming even when you don't see yourself as a victim.

Now, setting aside Sainz's experience, the NFL still has to answer the question of whether the team's behavior was objectively inappropriate -- so, stay tuned.

UPDATE: Sainz tells CNN's Rick Sanchez that she has accepted the apology of Jets owner Woody Johnson -- but added, "I'm agreeing with the idea that it's good that everybody knows that a woman or a man deserve the same treatment in the locker room."