Rather than tout their own accomplishments, Democrats look to fear of Sarah Palin to motivate their base 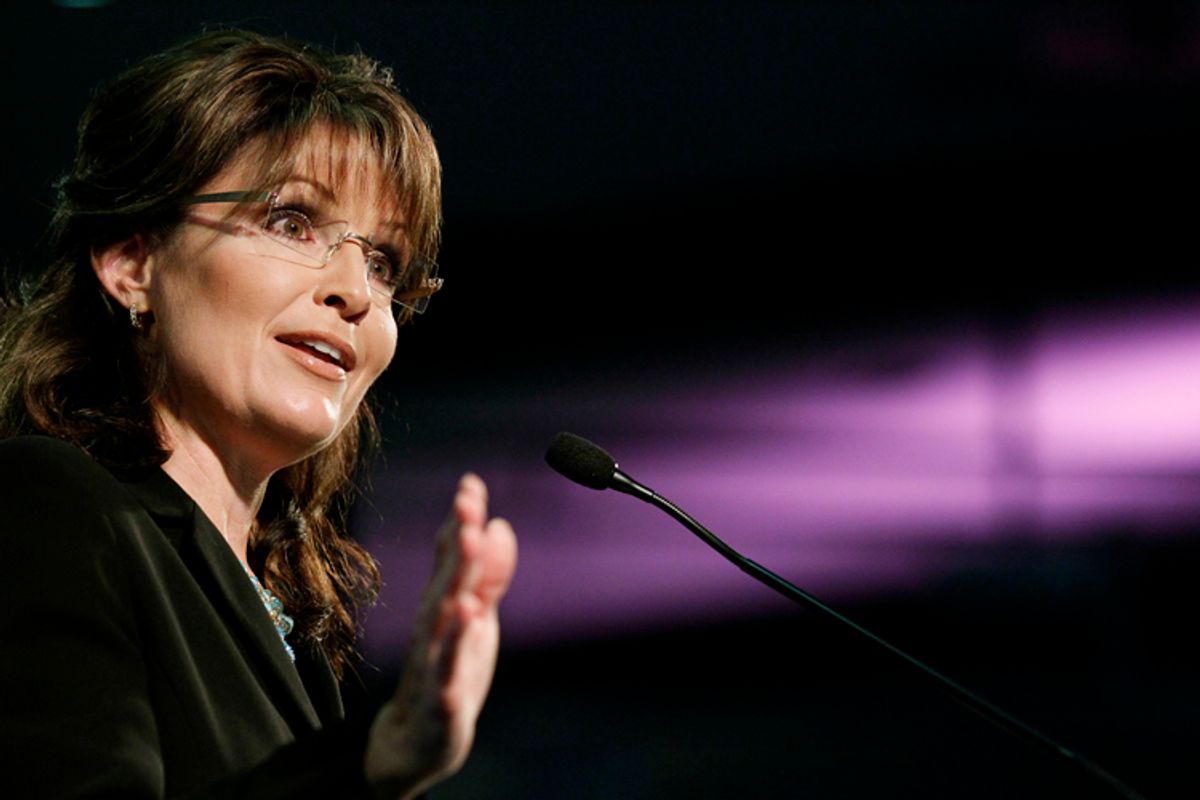 It looks as though Democrats are doing everything except taking Maddow's appeal to heart.  From The New York Times today:

Democrats Invoking Palin to Stir Base

Gone are the days when President Obama was the biggest source of motivation for Democrats.

It was a telling moment at Senator Tom Harkin’s 33rd annual steak fry, where [David] Plouffe, along with David Axelrod, a senior adviser to the president, came to try to dispel the predictions of a dismal November for Democrats. They promoted the party’s accomplishments, but they suggested that if members needed more enticement for Election Day, they should keep Ms. Palin and other Republicans at the forefront of the conversation. . . .

For months, Democratic leaders have tried several ways to rally their voters in hopes of closing the enthusiasm gap with Republicans. But as they head into the closing weeks of the midterm elections, hoping to shake Democrats into action, it's clear that invoking the name of Ms. Palin has now become a central part of the party's strategy.

"Right now, Republicans are coming out in big numbers,” Mr. Plouffe said. “We need to get Democrats excited."

One can reasonably debate the efficacy of this strategy:  I personally find it hard to believe that large numbers of voters will be motivated by a fear-mongering campaign centered around people who do not currently wield power, do not occupy any positions, and are not even running for office.  But the more significant point is what this tactic says about the Democratic Party.  They have controlled both houses of Congress for almost four years and the White House for almost two.  Yet rather than run primarily on affirmative accomplishments (some Democrats are even running against them), they're reduced to this not-very-inspiring or hope-laden message:  at least we're not as bad as Sarah Palin.

It's not hard to see why Democrats are relying on what Maddow called this "soul-sucking" tactic.  With no end in sight to the unemployment crisis, almost no real benefits yet in effect on their central legislative achievement (health care), a high likelihood of Social Security cuts following the election, few of the promises kept on the issues most important to their core base, and even hardcore Democratic pundit-partisans now finally -- and angrily -- acknowledging that Obama has continued the vast bulk of Bush/Cheney civil liberties/executive power abuses (ones which drove many progressives to remove the GOP from power), what else can they do to motivate people to vote for them besides try to scare people into thinking about the Sarah Palin menace?  It's exactly the technique Republicans used in 2006 when they had little to offer Americans alienated with what they did in power, and thus tried to make the election center around the frightening specter of Nancy Pelosi's San Francisco Values.  That tactic didn't work out very well for Republicans that year, and it's unlikely to work any better for Democrats this year (and at least with the GOP campaign, Pelosi really was an actual office-holder whose power would increase with a Democratic victory).  People want to see results from those in power, and fear-based campaigns about the other side in lieu of actual accomplishments are quite limited in their appeal.

That the Right has become an even more twisted, malicious and primitive version of what they were during the Bush years is unquestionably true.  And it's perfectly legitimate to point out the flaws and excesses of one's political adversaries.  But the expectations which large numbers of Obama voters had -- based on the promises made -- are not going to be forgotten with these distracting, divisive strategies.  The great irony of the Obama presidency is that a central promise of his candidacy was to reduce the corrosive cynicism pervading the citizenry regarding our political system, but dashing the hopes of huge numbers of first-time and young voters -- as the "enthusiasm gap" compellingly reveals is occurring -- will likely do more than any other single event to increase cynicism levels to all new heights.  It's easy to imagine large numbers of people who decided for the first time that politics can matter -- people who were enthused supporters who expected the fundamental change they were promised by electing Barack Obama -- giving up "hope" for a long time, if not forever, in the face of a Party which now has little to say to them other than:  But Look Over There at Sarah Palin!!

There's one irony worth noting in all of this as well.  It's been extremely common to hear Democratic Party commentators complain that the media pays too much attention to Palin and her various utterances.  But the reality, as today's NYT article demonstrates, is that Democratic officials want her front and center, and have done everything they can to keep her in the spotlight, because they desperately need her to distract from their own record.  Above all else, they want Palin and those like her to receive as much attention as possible, all in an attempt to try to use fear as a replacement for the hope and inspiration which are largely missing even among their own core supporters.

Following up on my analysis of NBC's White-House-loyal coverage of the supposed "end of combat operations in Iraq":  Reuters today reports that many of the soldiers still in Iraq are angry -- understandably so -- at this depiction.

UPDATE: Here's the headline of a post by John Aravosis today, reviewing the Democrats' records on gay issues over the last two years: 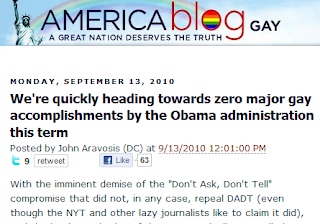 The Democrats' response to this?  The same as the one given to all of the disenchanted aspects of their base:  quit complaining, gays, and get your checkbooks out!  Sarah Palin.

UPDATE II:  Harper's Scott Horton has an excellent analysis today of the Obama DOJ's Bush-replicating abuse of the "state secrets" privilege and the 9th Circuit's acquiescence.  There is, however, one major deficiency in his commentary:  he fails to mention Sarah Palin.