"Everything Must Go": Will Ferrell's dazzling serious role

In "Everything Must Go," the comic actor plays an alcoholic salesman living in his own front yard 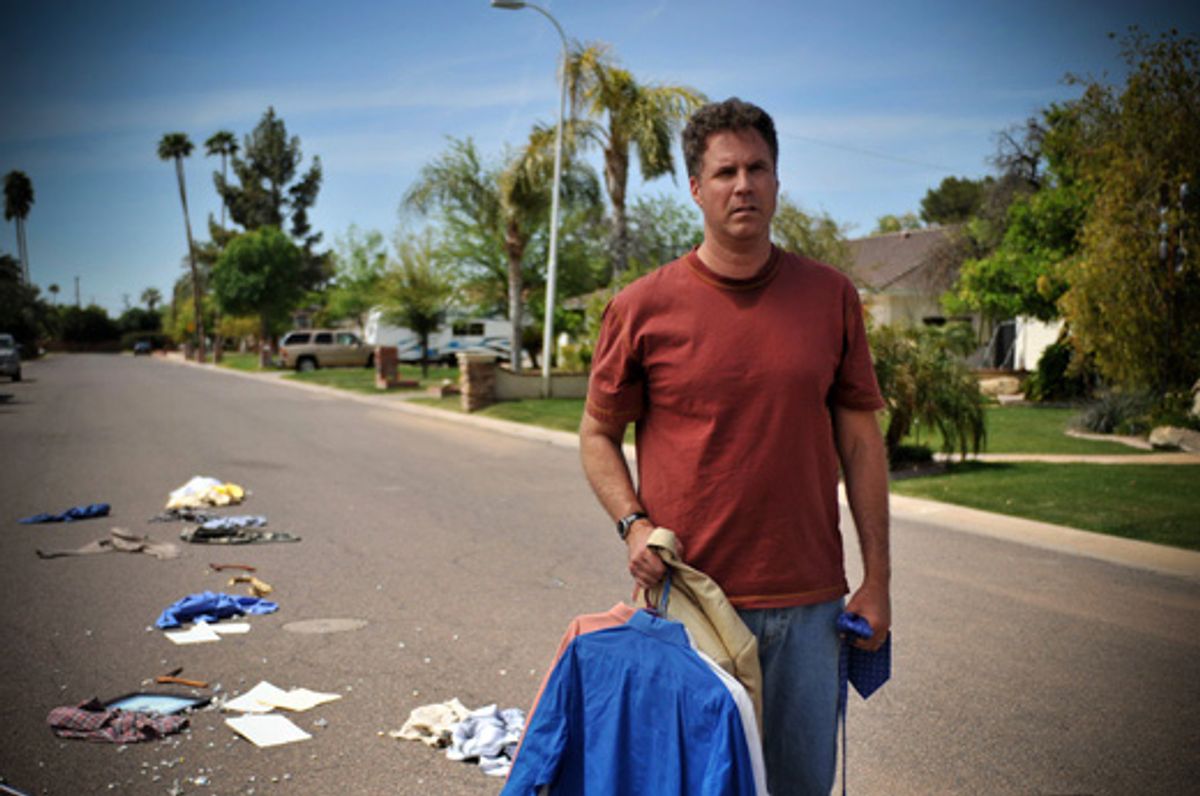 TORONTO -- "Everything Must Go," which premiered at the Toronto International Film Festival this weekend, was adapted by writer-director Dan Rush from a Raymond Carver short story, and it's very much that kind of movie: quiet, acutely observed, based in everyday events and ordinary moments rather than big, Hollywood-style "reveals." It does, however, have a pretty big Hollywood star, with Will Ferrell taking one of his few non-comedy roles as Nick Porter, an alcoholic sales executive who bottoms out in abrupt and spectacular fashion.

Something has gone horribly wrong on a business trip to Denver, and after Nick gets fired, he comes home to suburban Phoenix to find that his wife has pitched all his stuff on the lawn, changed the locks and disappeared. Under the pretense of holding a yard sale, he lives there -- at but not in his own house for several days, sleeping on a Naugahyde recliner and drinking Pabst Blue Ribbon by the case. (I'm not totally sure about that detail. Nick's an ordinary middle-class dude; Coors Light or MGD or Heineken would be more convincing.)

Ultimately the garage sale becomes real, and with the help of a hapless neighborhood kid (Christopher Jordan Wallace) and a pregnant neighbor nursing secrets of her own (it's Rebecca Hall, who is great and seems to be in everything here this year), Nick begins to grasp the possibilities in this symbolic act of renewal. Now, the movie I've just described could be anywhere from terrific to terrible, so what you need to know is that Ferrell gives a tremendously careful and nuanced performance, never overplaying Nick's drunkenness and despair but also never allowing us to get too cozy with this severely damaged and depressed guy. When Nick looks up an old girlfriend (Laura Dern, in a nice cameo) she tells him he always had a good heart, but there's a clear subtext: If you don't follow that up with good actions, it doesn't count for much, and Nick hasn't done too well with that part.

Furthermore, Rush's script and direction are exemplary, and he avoids all the most obvious and sentimental pitfalls or cop-outs. Carver knew the worlds of alcoholism and recovery (which is always partial and conditional) all too well, and "Everything Must Go" remains true to those often-harsh realities. Can a couple of strangers rescue a guy like this from total despair? Absolutely not. Can Nick rescue himself? Maybe, but this delicately balanced little movie offers only possibilities, not definite happy endings. This is an old-school independent film that won't make a zillion bucks or win major awards, but it's refreshingly honest, depicts the kinds of American lives not often seen on-screen and shows us a familiar star in a striking new light. (Distribution plans remain unclear.)