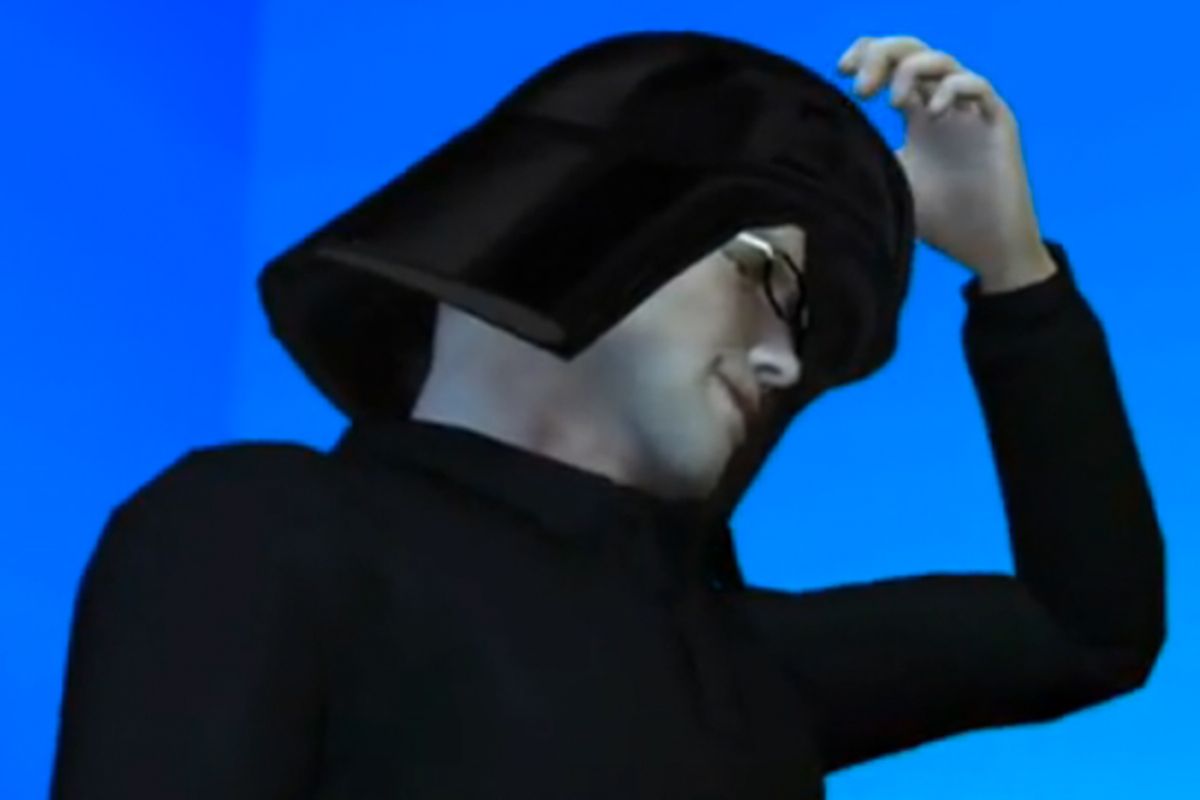 Busts of Milton Friedman, Friedrich Hayek and John James Cowperthwaite adorn the entrance lobby of Hong Kong/Taiwan newspaper mogul Jimmy Lai's Next Media headquarters. Understanding Lai's admiration for these iconic heroes of the free market (Cowperthwaite was the financial secretary of Hong Kong from 1961-1971) isn't hard -- Jimmy Lai escaped China for Hong Kong at age 12, and has long been a virulent critic of the Chinese Communist regime.

But I do wonder what Friedman et al. would make of Jimmy Lai's Taiwan animation operation -- a division of his Apple Daily newspaper that may best be described as cyberpunk tabloid journalism. Hilarious, irreverent, kind of true, a YouTube click or two away at any moment, and maybe just a little horrifying, from an old-school news business perspective.  If this is how journalism is going to survive the business model disruptions wrought by the Internet, well then, the workings of the free market are about to deliver a future that is just plain weird.

Next Media infamously kicked off its worldwide animation extravaganza with a reenactment of the Tiger Woods Thanksgiving golf club debacle last winter. More recently, the 200-strong staff of animators has brought us "Al Gore Reeling After Sex-Crazed Poodle Allegations," and, my personal favorite, a retelling of the newspaper wars between the Wall Street Journal and New York Times that features Rupert Murdoch and Arthur Sulzberger facing off West Side Story gang-style. But it wasn't until a reader e-mailed me this morning with a link to a Next Media piece from July that I had somehow missed, depicting Steve Jobs as Darth Vader, that I had to stop and say, what the heck is going on here?!

An enlightening CNN clip that interviews Jimmy Lai and takes us behind the scenes at Next Media's Taiwan animation headquarters quotes Washington Post media critic Howard Kurtz huffily declaring that if this is the future of journalism, he wants no part of it. I can see his point. Lai is out to make money by syndicating his animations far and wide, Associated Press-style. But while the Steve Jobs clip does a decent job of covering a spring and summer's worth of Apple news -- stolen iPhone prototypes, suicidal Chinese workers -- it certainly doesn't fit under what we used to think of as "news." Steve Jobs isn't actually Darth Vader.

But I'm not sure. When Jon Stewart's "Daily Show" can be counted on for representing reality as it is actually happening with more fundamental truth than most network or cable news shows, then why shouldn't Taiwanese animators be more trusted to capture the essence of Steve Jobs' will to power than the Washington Post? For a generation reared on YouTube and immersed in video game virtual worlds, two-minute computer animations may be the most effective narrative vehicle. Whether Howard Kurtz is ready or not, this seems to be where we're headed.

However, after watching the Steve Jobs as Darth Vader clip one more time, I am left with one burning question: If Apple is now the Death Star, who is the new Luke Skywalker?