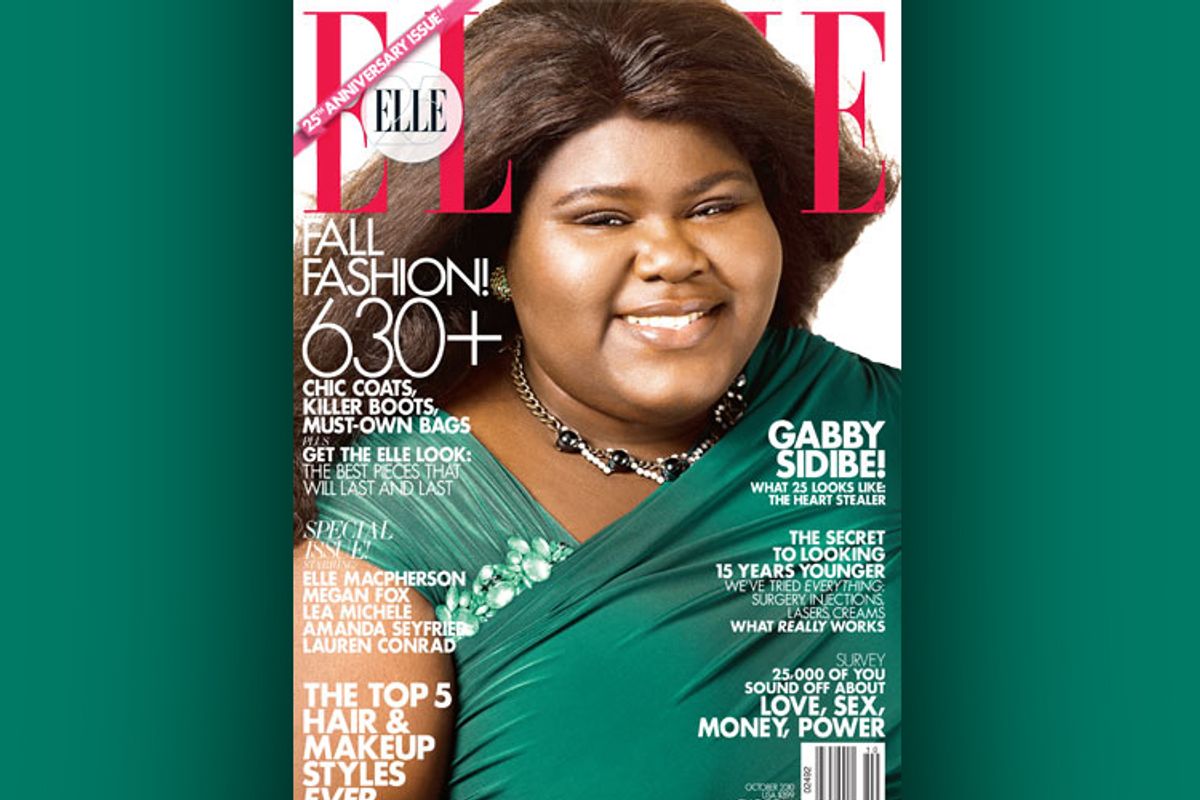 It makes all kinds of sense that for its 25th anniversary issue, Elle magazine would choose a cover girl who in the past year has scored an Oscar nomination, hosted "Saturday Night Live," and is currently costarring on a Showtime original series. But Gabourey Sidibe is not your typical Hollywood It girl, a fact brought home by the other mid-20s women that Elle chose for its special series of covers: the wispy, white trio of Amanda Seyfried, Megan Fox and Lauren Conrad. One of these ladies is not like the others.

So how do we solve a problem like Gabourey Sidibe? When Vanity Fair neglected the "Precious" star for its Hollywood issue earlier this year, the magazine came under fire for its glaring omission. Yet, in this latest appearance, Elle's inclusion of her feels less like a celebration of non-traditional beauty than a token gesture of diversity.

While blogs like Babble have been quick to argue that Sidibe's presence celebrates the notion "that beauty comes in all sizes," it's hard to feel like busting out the champagne when Elle's other "game changing" women of a certain age are much more traditional glamourpusses. The only other African-American woman on the list is Janelle Monáe, and the only other who isn’t whippet-thin is Meghan McCain. And as Womanist Musings pointed out, maybe it's just a trick of the lighting, but does Sidibe look rather less dark-skinned in her Elle incarnation than she did when she graced the cover of Ebony?

The public enthusiasm for Sidibe is indisputably justifiable. She's a natively gifted actor. She surprised critics who assumed her harrowing turn in "Precious" was playing to type by proving herself a truly ebullient and very funny performer. Who but the most heartless of buzz kills would rain on the Cinderella parade of a woman with such infectious charm, a lady so blatantly outside of the cookie-cutter starlet mold that she seems to represent all our triumphant underdog fantasies?

But one big black woman on a magazine cover -- especially when she represents one-quarter of said magazine's print run -- does not a revolution make. Nor is it necessarily a bold step for diversity or fat acceptance. Had Elle omitted Sidibe from its roster of notable 20-somethings, it would have been a strange oversight. Why then does her inclusion feels like a weird fetishization that borders on patronizing? Is that cover image of a radiant, smiling Sidibe one of happy, successful American youth? Or is it of an exotic creature, put on display for us in a feel-good editorial gesture? Look at you, unconventional actress! We're just bold enough to celebrate you!

The movie industry is lousy with women who look like Megan Fox. There are few who look like Sidibe who've achieved her level of success, and done so with such speed. Everything she attains takes on a different significance than when, say, an Emma Stone or Rooney Mara achieves it. She's not just a pretty girl with a healthy career. She's the big black girl in a town full of skinny white chicks.

But just because she represents the dreams and good wishes of a whole population of women who don't roll out of bed looking like Mila Kunis doesn't mean her victories represent a sea change in the way we as a culture deal with race or gender or size. Could she, or someone who looks like her, open an action movie? A romantic comedy? Maybe someday, but for now she's the canary in the coal mine of what the American public will embrace as a new kind of leading lady and fashion icon. And as such, she faces a dilemma a lot of ordinary women all over can relate to -- that she just doesn't have the same fit as those Hollywood starlets.

She is, instead, simply Gabourey Sidibe. And she's one of a kind.