At the Iowa State Fair, the future of cattle biotechnology wins a prize 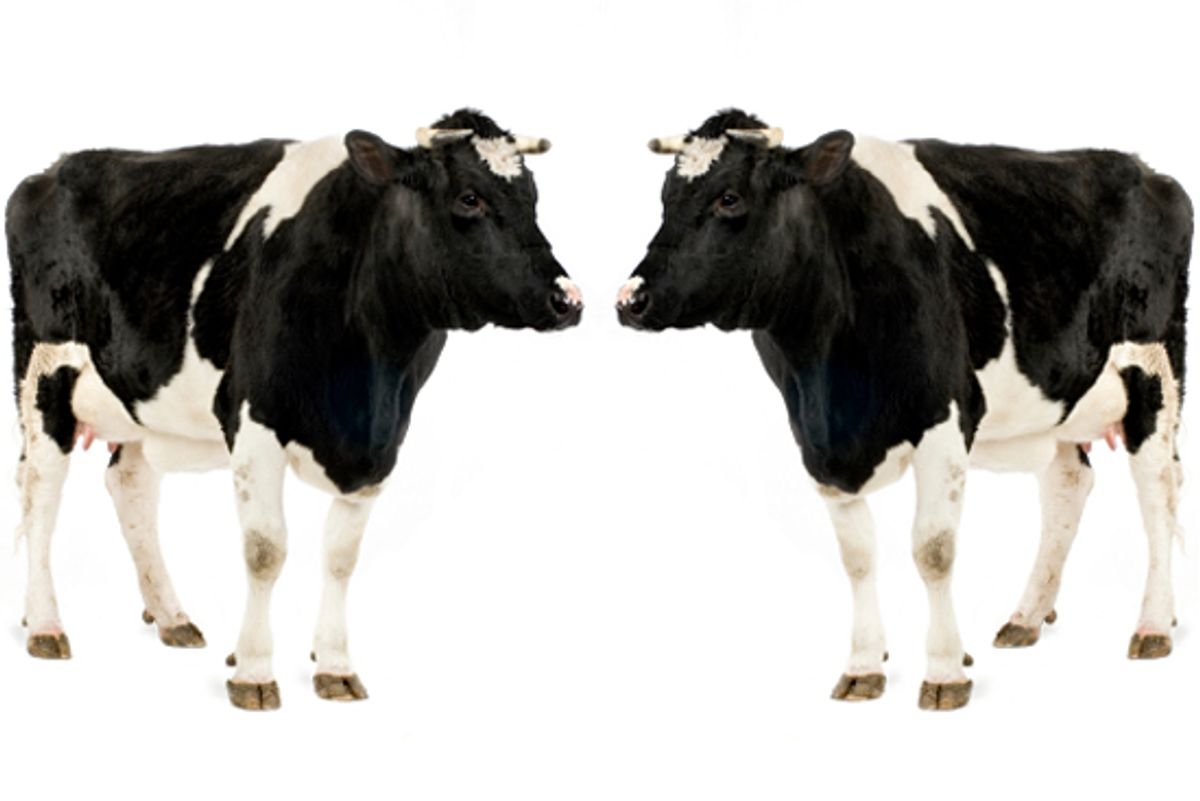 It has the feel of a science fiction story from the "golden age" of the 1950s, perhaps written by Ray Bradbury or Clifford Simak. A fresh-faced farm boy brings his prize steer "Doc" to the Iowa State Fair, and wins the 4-H Grand Champion blue ribbon. Only after the steer triumphs is it revealed that "Doc" is actually a clone of the steer that won the same prize two years earlier. Hardly seems fair, does it?

It's just the kind of twist the masters of science fiction gloried in -- a scene as comfortable and familiar and apple-pie-American as a state fair, warped suddenly into the Twilight Zone with one deft flick. But this story isn't science fiction. It took place three weeks ago at the real Iowa State Fair. 17-year-old Tyler Faber, reports the Des Moines Register, son of David Faber, president of Trans Ova Genetics of Sioux Center, Iowa, took home the prize for "Doc," two years after winning exactly the same prize for "Wade." Doc is a clone of Wade. (Hat tip: Barry Estabrook's Politics of the Plate blog.)

There has been a fair bit of chatter in cattle country about whether it is ethical to enter show cattle contests with clones of previous victors, not to mention whether it is just plain discriminatory on financial grounds -- it costs $20-25,000 to clone a cow today. But that's kind of missing the point. There are no rules against cloned 4-H competitors, just as there is no law, in the United States, against selling cloned meat for human consumption. However, there is enough culture-wide ickiness associated with the idea of cloned meat that the FDA has requested that the livestock industry voluntarily keep cloned meat out of the food supply. And some of the largest meat vendors in the U.S. including Tyson Foods and Smithfield Foods, have declared that they will not accept cloned animals.

The Trans Ova Genetics 4-H gambit is clearly an attempt to combat perceptions that cloned animals aren't as wholesome as the real thing. "Doc" was cloned by Bovance, a joint venture between Trans Ova Genetics and ViaGen, the company that owns the intellectual property rights to the technology that produced the very first cloned animal, Dolly the sheep. Between the two of them, Trans Ova and ViaGen produce, reports Reuters, "the vast majority of the clones in the United States."

Which gives you some context for David Faber's explanation for why his son raised a cloned steer for show competition.

"We really did it to be able to highlight the capability of the technology that exists," Faber told DTN on Wednesday...

"This steer is a perfect example of all the systems working," he said. This included the technology working, the cloning company doing what it was supposed to be doing, and the family's involvement. "We did this in an open and transparent manner, complying with the voluntary program USDA has put in place to create an orderly transition for the technology," Faber said.

Because, you know, you wouldn't want a disorderly transition. Like say, what's actually happening right now. Because while the FDA wants companies to voluntarily keep cloned meat out of the food supply, there are no restrictions on what can be done with the offspring of clones. And that just happens to be where all the action is right now in the commercial cloning industry: The semen from clones of champion bulls is a hot commodity, used to artificially inseminate cows across the world.

I have yet to see any absolutely convincing data proving that cloned meat is unhealthy, (although I'm certainly not predisposed to trust the almost-completely-co-opted-by-special-interests USDA), but it does seem weird that the government would be in favor of a voluntary moratorium on allowing cloned meat to enter the food supply, but not meat from the offspring of those clones. Science fiction was never quite that kooky.

Agriculture Biotechnology How The World Works