"Legendary" is only the latest Hollywood film to include a mystical, benevolent African-American character 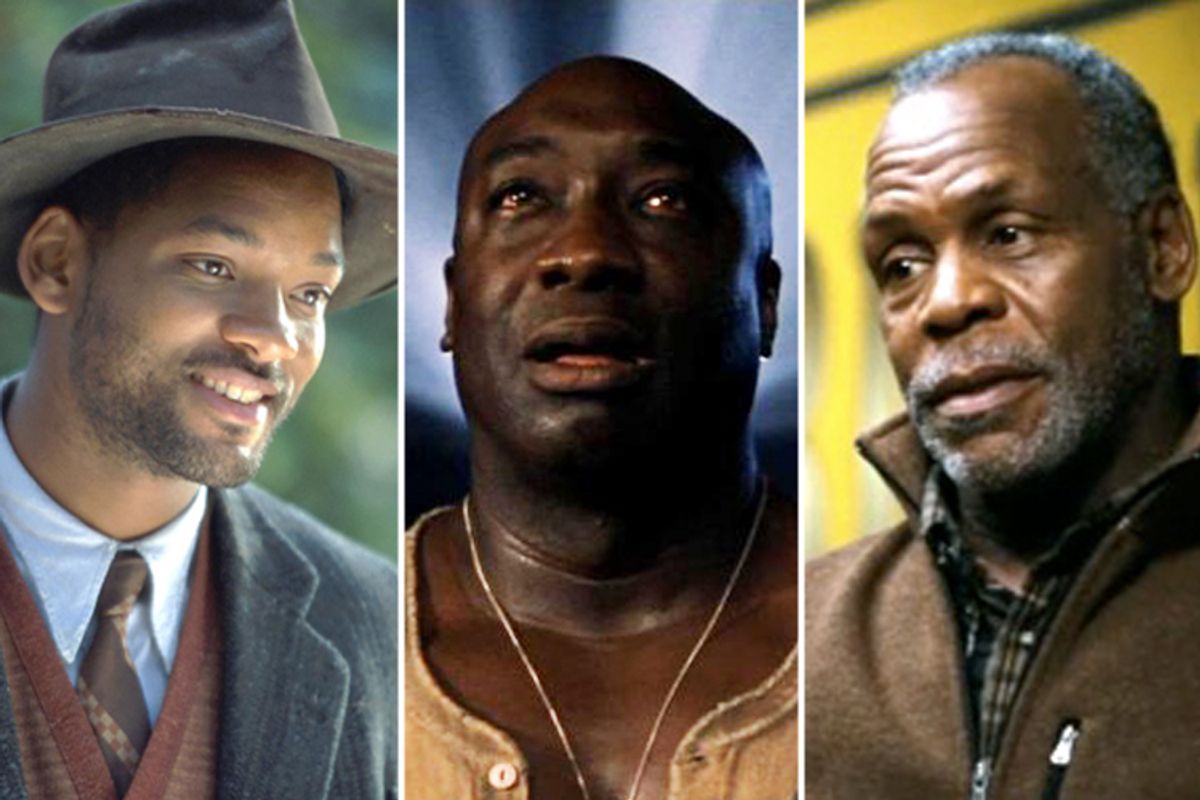 Will Smith in "The Legend of Bagger Vance," Michael Clarke Duncan in "The Green Mile" and Danny Glover in "Legendary"
--

The hero seems bewildered and delighted as he says this. He's about to compete in an important match, reeling from melodramatic blows. When Harry shows up out of nowhere to give Cal a pep talk, the stage is set for a "Rocky"-style, go-the-distance ending. But if Cal had thought about Harry in terms of pop culture stereotypes, he could have answered his own implied question: How come you're always there when I need you, even though I barely know you? Harry seems to stand apart from the rest of the community, even though he's a familiar and beloved part of it. The only character who speaks to Harry directly is Cal, and their conversations are always about Cal and his well-being. He's such the benevolent guardian angel figure that the cynical viewer half-expects him to be revealed as a figment of Cal's imagination.

He's not imaginary. He's a "Magical Negro": a saintly African-American character who acts as a mentor to a questing white hero, who seems to be disconnected from the community that he adores so much, and who often seems to have an uncanny ability to say and do exactly what needs to be said or done in order to keep the story chugging along in the hero's favor.

We have Spike Lee to thank for popularizing this politically incorrect but very useful term. Lee used it in a 2001 appearances at college campuses. He was blasting a then-recent wave of such characters, played by the likes of Cuba Gooding Jr., in "What Dreams May Come" (a spirit guide helping Robin Williams rescue his wife from Hell), Will Smith in "The Legend of Bagger Vance" (a sherpa-on-the-green, mentoring Matt Damon's golfer), Laurence Fishburne in "The Matrix" (Obi-Wan to Keanu Reeves' Luke Skywalker) and Michael Clarke Duncan in "The Green Mile" (a gentle giant on death row whose touch heals white folks' illnesses).

The word choice is deliberately anachronistic -- "negro" started to fall out of fashion about 40 years ago. But that's why it's so devastating. The word "negro" was a transitional word that fell between the white-comforting "colored" and the more militantly self-determined and oppositional "black." It asked for dignity and autonomy without going that extra step asserting that it existed anyway, with or without white America's approval. "Negro" fits the sorts of characters that incensed Lee. Even though the movies take pains to insist that the African-American character is as much a flesh-and-blood person as the white hero, the relationship is that of a master and servant. And not a real servant, either: one that really, truly lives to serve, has no life to speak of beyond his service to Da Man, and never seems to trouble himself with doubts about the cause to which he's devoting his time and energy. "How is it that black people have these powers but they use them for the benefit of white people?" Lee asked sarcastically.

The Magical Negro character (or as Lee called him, the "super-duper magical negro") wasn't invented in the 1990s.  He's been around for at least 100 years, accumulating enough examples (from Uncle Remus in "Song of the South" through the clock-keeper played by Bill Cobbs in "The Hudsucker Proxy") to merit snarky lists, an entry in the urban dictionary  and a detailed Wikipedia page (turns out Stephen King's fiction has been a magical negro factory).  The term gained an even wider audience when a candidate to chair the Republican National Committee mailed out a song titled "Barack the Magic Negro," with lyrics to the tune of the Peter, Paul and Mary hit. Outraged liberals focused on the surface racism encoded in the song title, ignoring the possibility that the song, however lead-footed in its humor, was rooted in something real.

What got lost in the flap over the song was the phrase's relevance to Obama's candidacy: There was (among Democrats, at least) a widespread sense that replacing George W. Bush with the Illinois senator would send a definitive signal that everything was different now, that it was time to rebuild, repair, rejuvenate and move forward, not just toward a post-Bush society, but a post-racial one. It was an absurd hope, one that Obama himself seemed to resist endorsing at first, only to relent and begin publicly playing up his pioneer status as the first not-entirely-Caucasian man to pursue and then win the Democratic presidential nomination. Frequent Salon commenter David Ehrenstein tackled this subject in a memorable 2007 Los Angeles Times piece that called Obama a "magic negro" almost a year before that RNC ditty appeared. Likening Obama to a spiritual descendant of the noble, kindhearted, often sexless black men portrayed by pioneering leading man Sidney Poitier, he wrote, "Like a comic-book superhero, Obama is there to help, out of the sheer goodness of a heart we need not know or understand. For as with all Magic Negroes, the less real he seems, the more desirable he becomes."

Suffice to say Obama's election triggered a paroxysm of paranoia, insecurity and rage in roughly half the population (maybe more, if polls on immigration and the Park51 project are to be believed). These flare-ups of privilege (wherein an almost entirely white sector of the populace descended from once-despised immigrants embraces the idea that "we" have to protect or reclaim "our" country from "them") cast retrospective light on the Magical Negro resurgence, which flowered in earnest during the last Democratic administration and has been going full-steam ever since.

Between demographers' projections of a 21st-century majority-minority swap, Clinton's unprecedented (un-presidented?) comfort with African-American culture (which he made official during the 1992 campaign, in an effective bit of pandering stagecraft, by playing sax on "The Arsenio Hall Show"), and hip-hop's supplanting rock as the country's unofficial national soundtrack, there was a sense, even in the pre-Internet era, that the white man either wasn't in control anymore or soon wouldn't be. Whitey was just going to have to deal.

Things haven't played out quite so simply, of course. In every aspect of quality of life that can be measured, nonwhite folks have always tended to be worse off than whites. That hasn't changed in the aughts, and the recession/depression has hit black men especially hard.

Looking back over the last 20 years worth of cultural and demographic unrest, the M.N. phenomenon seems a form of psychological jujitsu -- one that takes a subject that some white folks find unpleasant or even troubling to ponder (justifiably resentful black people's status in a country that, 50 years after the start of the modern civil rights struggle, is still run by, and mostly for, whites) and turns it into a source of gentle reassurance. Do "they" hate us? Oh, no! In fact, deep down they want "us" to succeed, and are happy to help "us" succeed, as long as we listen well and are polite. That's why Whoopi Goldberg put her life on hold to help Demi Moore get in touch with her dead boyfriend in "Ghost," and Jennifer Hudson lived to serve Sarah Jessica Parker in the first "Sex and the City" movie. And it's why Danny Glover's character -- one of but a few black men in an otherwise white town -- takes such a keen interest in the life of a bantamweight high school wrestler who has apparently lived in the same town with Harry his entire life and recognizes him as a local eccentric, yet never bothered to get to know him before now.

People that enjoyed "Legendary" may say I'm being unfair to Harry, that there's more to him than Magical Negro-hood.  And yes, it's true, at the end -- spoiler alert! -- we're told that he's not just a gravel-voiced sweetheart who likes to hang out by the local creek, catching fish and dispensing words of wisdom. He's actually quite influential -- not literally magical, but nevertheless demi-godlike in his influence over the town and its history.  But the specifics of Harry's character don't refute the label; quite the contrary. The revelation of Harry's influence is a nifty trick, one that's common in nearly all movies featuring nonwhite mentor/sidekick/deus ex machina characters. It seems appealing enough in the abstract. But it's weak soup when you look at such a character's role in the totality of the story.

Danny Glover, arguably one of cinema's most versatile and likable character actors, gets to play something close to God (he even narrates the story and turns out to have had a hand in three generations of local lives). But he doesn't get a good scene with anybody but the hero, doesn't get even the intimation of a private life, and barely speaks to anyone in the town that supposedly adores and respects him. Like the clock-tender in "The Hudsucker Proxy," the HIV-stricken painter/saint from "In America," and Ben Vereen's characters in "Pippin" and "All That Jazz," Harry's aura of omnipotence is compensation for being shut out of the movie. It's a screenwriter's distraction that obscures the character's detachment from the heart of the narrative -- and the character's essentially decorative nature. Like the hot-tempered black police captain who demands the maverick white detective's badge and the stern black woman judge who dresses down the kooky but irresponsible white heroine and warns her to get her life together, the Magical Negro is a glorified walk-on role, a narrative device with a pulse. The M.N. doesn't really drive the story, but is a glorified hood ornament attached to the end of a car that's being driven by white society, vigorously turning a little steering wheel that's not attached to anything.

Which might be a harsh but accurate metaphor for our current president, come to think of it.