Eight months after imposing the death penalty on a U.S. citizen, Obama considers indicting him 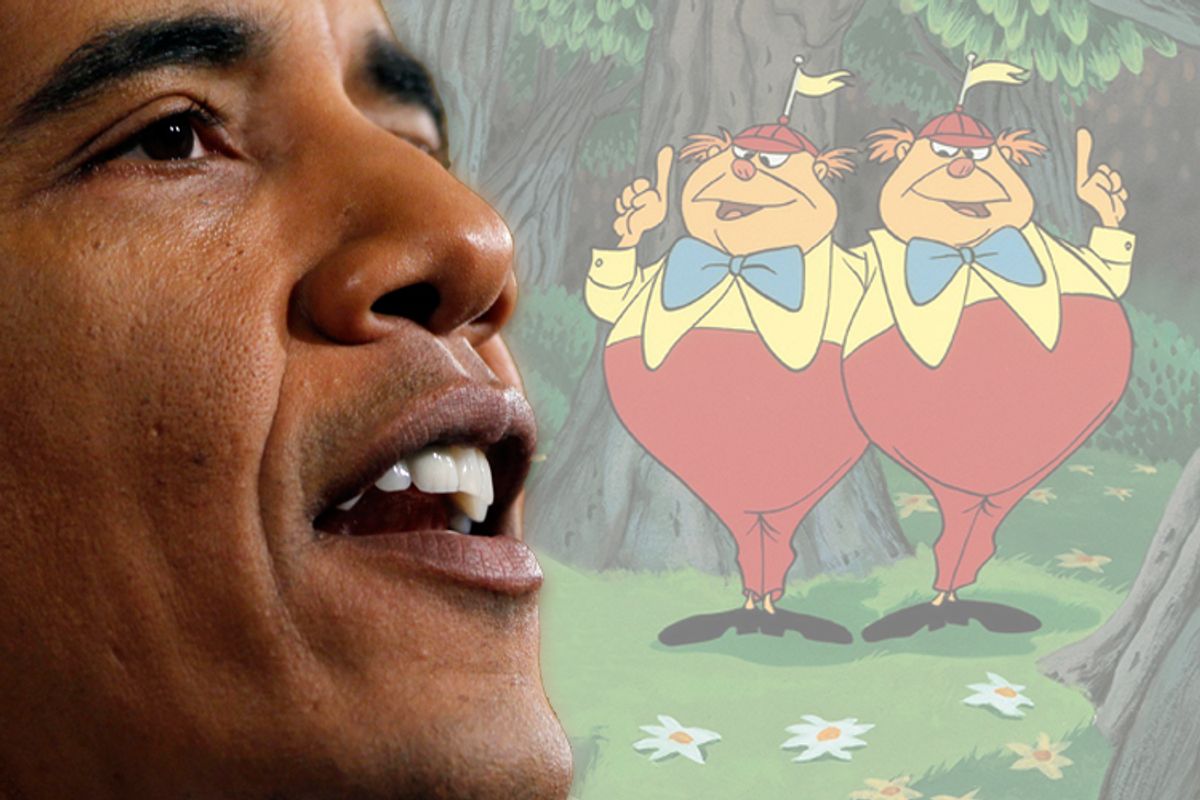 "Let the jury consider their verdict," the King said, for about the twentieth time that day.

"No, no!" said the Queen. "Sentence first -- verdict afterward."

"Stuff and nonsense!" said Alice loudly. "The idea of having the sentence first!"

"Off with her head!" the Queen shouted at the top of her voice.

The Obama administration has taken the extraordinary step of authorizing the targeted killing of an American citizen, the radical Muslim cleric Anwar al-Awlaki, who is believed to have shifted from encouraging attacks on the United States to directly participating in them, intelligence and counterterrorism officials said Tuesday. . . . It is extremely rare, if not unprecedented, for an American to be approved for targeted killing, officials said.

The Obama administration is considering filing the first criminal charges against radical cleric Anwar al-Awlaki in case the CIA fails to kill him and he is captured alive in Yemen.

So at least eight months after the President imposed the death penalty on this American citizen without charges -- Dana Priest reported back in January that "Bush gave the CIA, and later the military, authority to kill U.S. citizens abroad"; "the Obama administration has adopted the same stance"; and "the CIA list included three U.S. citizens, and an intelligence official said that [Anwar] Aulaqi's name has now been added" -- the Obama administration is now "considering" filing criminal charges against him.  If it were Obama's goal to replicate the mentality of the Wonderland Queen as completely as possible, could he do a better job than this:   I, the President, hereby unilaterally sentence Anwar Awlaki to death . . . (8 months later):  we shall now consider charging him with a crime, giving him a trial, and obtaining a verdict.  "Sentence first -- verdict afterward," said the Queen.

Note, too, this passage from the Associated Press' article:

Counterterrorism officials regard al-Awlaki as a terrorist operative, not just a preacher, but they have revealed few specifics.

Who needs to see evidence or hear "specifics" in an authoritarian culture?  Despite this lack of "specifics," there is no shortage of Americans running around dutifully condemning Awlaki as a "Terrorist" and calling for his death.  How, despite the lack of "specifics," do they know this?  Because the President has said so, and that, by definition, more than suffices for good authoritarians -- even when it comes to endorsing the presidentially-imposed death penalty on their fellow citizens without the slightest pretense of due process.  Then, from the AP article, there is also this:

Another option, given al-Awlaki's increasingly violent sermons and his collaboration with al-Qaida's propaganda efforts, would be charging him with supporting terrorism. But that charge carries only a 15-year prison sentence, leaving the administration open to questions about how the president can authorize the CIA to essentially impose the death penalty for such a crime.

So the only crime for which there appears to be any known evidence is one which not only raises serious First Amendment issues ("violent sermons" are clearly protected speech and participating in "propaganda" sure sounds like it is), but also one that carries only a "15-year prison sentence."  Apparently, though, if the law does not allow for application of the death penalty to a citizen whom Barack Obama wants dead, then all of that annoying "process" about indictments and evidence and trials and the like will simply be discarded with the imperious wave of a presidential hand and the death penalty imposed anyway.

Officials also told the AP that charging Awlaki with "direct involvement in terrorism could require the U.S. to reveal evidence gleaned from foreign wiretaps or confidential informants" -- so apparently, the death penalty can be imposed now without a trial if the Government has secret evidence of someone's guilt that they really want to keep secret.  Perhaps that can be the new slogan mounted on the Supreme Court facade, placed next to (or on top of, or over) the current "Equal Justice Under Law":  Just Trust Us: He's Guilty.

It would actually be progress if the Obama administration were considering bringing charges against Awlaki in lieu of killing him without due process.  But there's no indication that's so.  To the contrary, the first line of the AP article says that charges are being considered only "in case the CIA fails to kill him," and only in order to strengthen the administration's demands for him to be sent to the U.S. if the Yemeni Government captures him before the U.S. can kill him.  Indeed, for the reasons Marcy Wheeler details, this move seems more than anything else to be an effort to subvert the lawsuit brought by the ACLU and CCR to enjoin Awlaki's killing, which will continue even if there are charges filed (as long as they're still trying to kill him).  Of course, the Obama administration has already tried to kill Awlaki with at least one missile strike.  Getting around to finally charging someone with a crime whom you've been trying to kill without charges is a rather ugly, and rather tyrannical, act.  Just ask Lewis Carroll.  Or Alice ("'Stuff and nonsense!' said Alice loudly. 'The idea of having the sentence first!'").

A couple of related points:

(1)  The U.S. has perpetrated "a record number" of drone attacks in flood-suffering Pakistan this month, targeting the Haqqani network.  Juan Cole notes the irony:  "Jalaluddin Haqqani is one of Ronald Reagan's 'Freedom Fighters,' who battled the Soviet occupiers of Afghanistan in the 1980s with American aid. He could not accept the US invasion and occupation of his country, either, and organized an insurgency now mainly led by his son Siraj."

(2) Keith Olbermann, August 18:  "Chief foreign correspondent, Richard Engel, in a world exclusive, embedded with, reporting live from the last convoy of American combat troops as it leaves Iraq via the Kuwait border."  AFP, today:  "At least seven civilians and two Iraqi soldiers were killed on Wednesday when shooting erupted after a joint US-Iraqi raid in the Sunni Arab former rebel bastion of Fallujah, Iraqi officials said.  The raid was the latest sign that, while Washington declared an official end to combat operations in Iraq on September 1, US troops continue to conduct joint operations and remain exposed to fighting."

UPDATE:  Equally relevant is this passage from Through the Looking Glass, Chapter 5 (h/t Terry5135):

"Oh, things that happened the week after next," the Queen replied in a careless tone.  "For instance, now," she went on, sticking a large piece of plaster on her finger as she spoke, "there's the King's Messenger. He's in prison now, being punished: and the trial doesn't even begin till next Wednesday: and of course the crime comes last of all."

"That would be all the better, wouldn't it?" the Queen said, as she bound the plaster round her finger with a bit of ribbon.

"You're wrong there, at any rate," said the Queen.

The Queen's logic, of course, wasn't quite extreme as the Obama administration's, since the pre-trial punishment there was merely prison, not assassination via drone.