Stumping in Minnesota, he calls Michele Bachmann "the ultimate example of putting ideology over evidence" 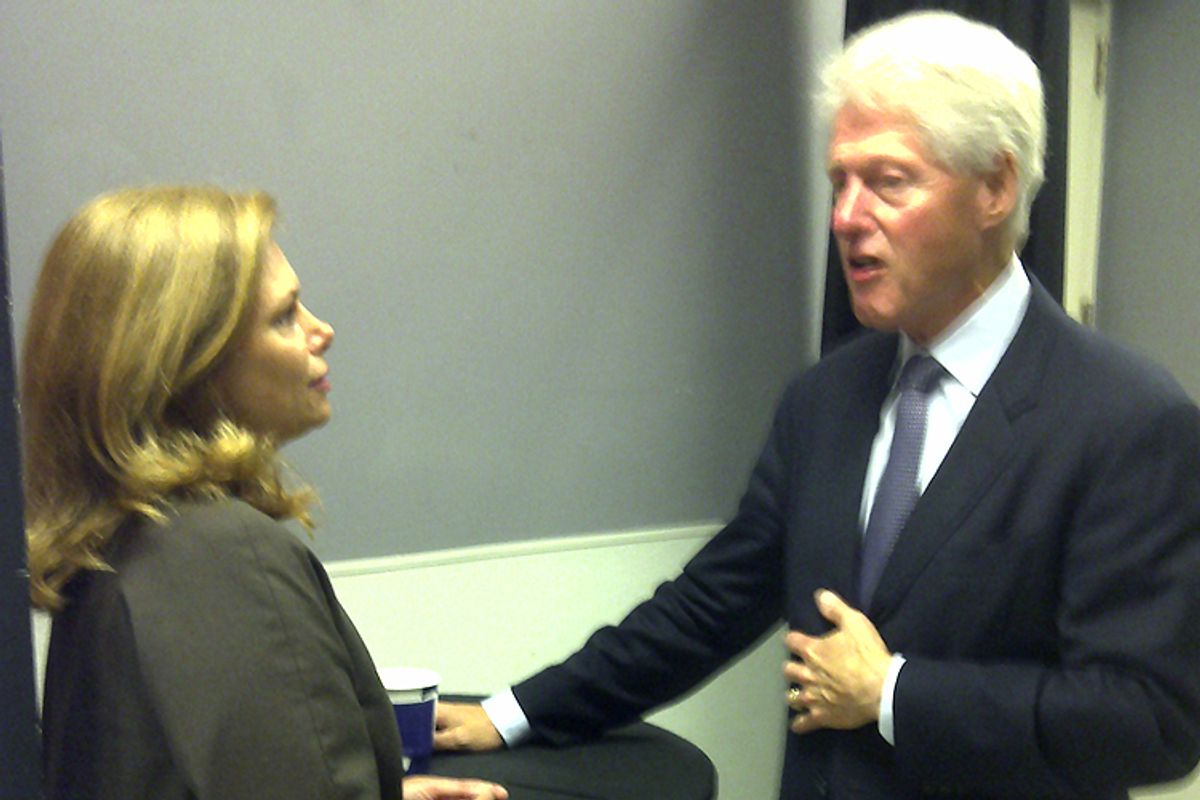 As Tea Party activists celebrated their upset triumph in Delaware, Bill Clinton showed up in Minneapolis to support the Democrat challenging the insurgent Republican movement’s favorite member of Congress:  Michele Bachmann, R-Minn., the founder of the Congressional Tea Party Caucus.

At a late-night fundraiser for state Sen. Tarryl Clark, Clinton described Bachmann as the epitome of a trend he regards as profoundly dangerous to the nation’s future. "Your opponent," he told Clark, "is the ultimate example of putting ideology over evidence."

"I respect people with a conservative philosophy," he continued. "This country has been well-served by having two broad traditions within which people can operate. If you have a philosophy, it means you’re generally inclined one way or the other but you’re open to evidence. If you have an ideology, it means everything is determined by dogma and you’re impervious to evidence. Evidence is irrelevant.

"That’s how I see Rep. Bachmann. She’s very attractive in saying all these things she says, but it’s pretty stupid."

Clinton lamented that "a distinguished former governor of Delaware was beaten tonight by the so-called tea party candidate" because enough primary voters had accepted a "new narrative" promoted by the extreme right. "They’re saying that Barack Obama represents the spearhead of this vast socialist conspiracy to have government swallow up the fabric of American life and he’s going to crush our individualism, and our freedom, and the vitality of small business ... They tell us that they they represent America the way it used to be, self-reliant, virtuous individuals and small businesses. And the truth is, what they want to do is dismantle government so corporations, big corporations will control our destiny."

The former president said that over the past year, "their party has moved closer to Michele Bachmann. Look, in Utah a very conservative senator, Bob Bennett, was defeated for one reason -- because he dared to sponsor a healthcare plan with a Democrat, Ron Wyden. And he did that because he looked at the evidence, that this country was going to be killed economically if we didn’t begin to control healthcare costs."

The Republican Party had changed, said Clinton, during the course of his own lifetime. "It’s a very different Republican Party from the one I grew up with," he said, a change that began "when they foresaked their founder, Abraham Lincoln" to chase segregationist voters in the South. Republican traditions favored private initiative and smaller government, but if the nation needed federal action, the Republicans supported it. He recited a litany of landmark Republican programs, from Lincoln’s creation of the land-grant college system to Theodore Roosevelt’s anti-trust reforms to Eisenhower’s construction of the Interstate Highway System.

"For the past 30 years they’ve been telling us that government is the problem and the destruction of government is the solution," said Clinton, "and now I think they’ve gotten to the point where they actually believe it ... It’s very important to our country that we don’t go that way. You can’t be impervious to evidence or you’ll get into trouble."

The fundraising party for Clark, held at a Minneapolis hotel, concluded a very long day of campaigning for Clinton that began in Ohio with several events for embattled incumbent Gov. Ted Strickland and included a fundraiser and rally for Mark Dayton, the Democratic nominee for governor in Minnesota.

More than once on primary day, Clinton made glancing, snarky remarks about the wackiness of the Tea Party. "Up in Alaska," he said of Joe Miller, the Republican Senate nominee who defeated incumbent Sen. Lisa Murkowski, "they have a candidate who will tell you that he went to Yale Law School," the Clintons' own legal alma mater. "What he won’t tell you is that he didn’t learn anything there. He says that unemployment insurance is unconstitutional! So now the Constitution means that we must have another 5 or 10 million people in bread lines!"

And at another point he mocked  Dan Maes, the floundering Republican gubernatorial candidate in Colorado. "He says that the bike paths that have made Denver one of the healthiest cities in the country are a plot to turn over Colorado’s sovereignty to the United Nations." Clinton paused and chuckled. "I didn’t make this stuff up."