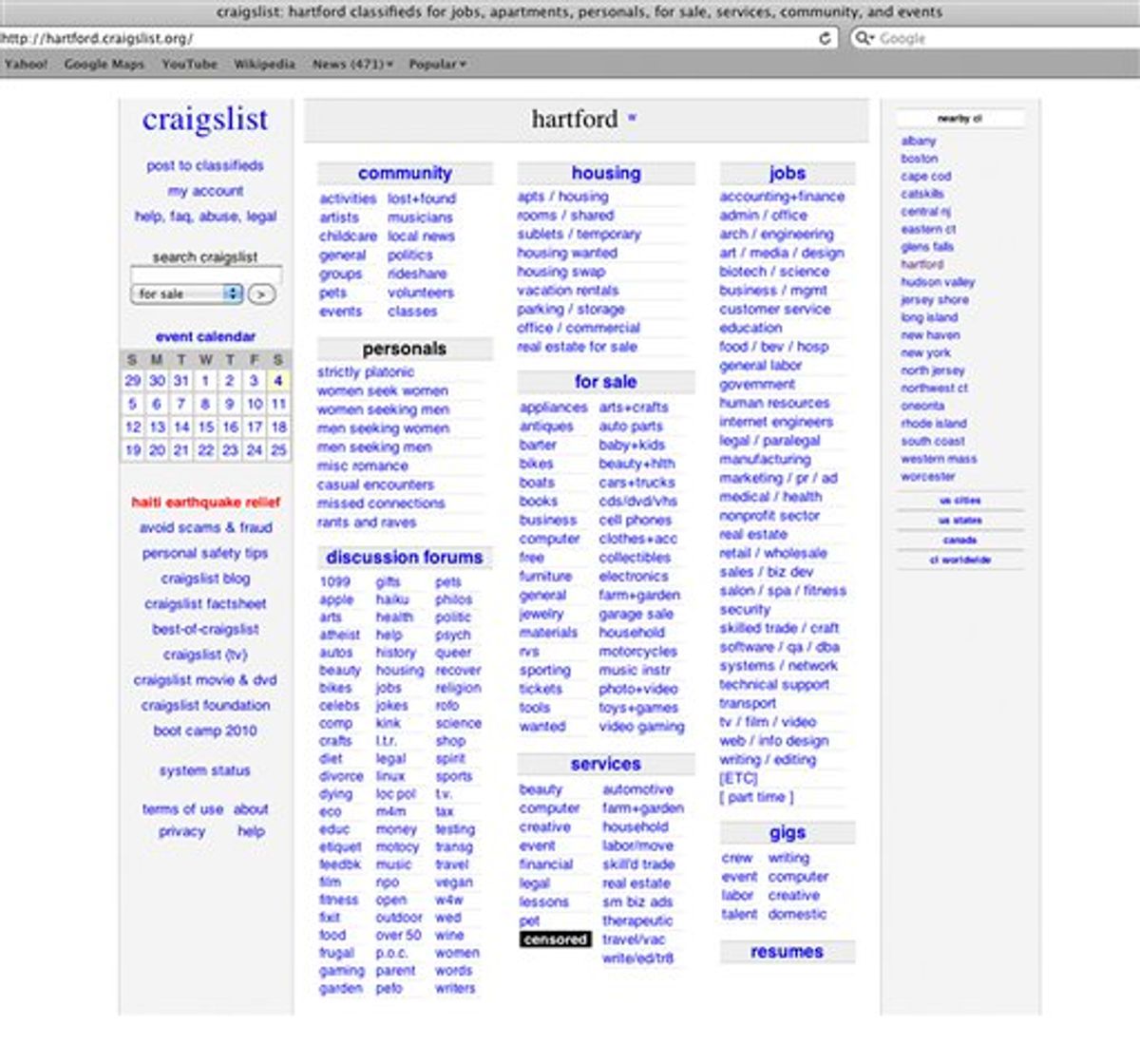 This screen shot made on Saturday, Sept. 4, 2010 shows the opening page of Craigslist's website for Hartford, Conn., featuring a "censored" logo over what used to be the adult services section. Craigslist apparently closed the section two weeks after 17 state attorneys general demanded it be shut down. Connecticut Attorney General Richard Blumenthal, one of the AGs who pressed for the change, said in a written statement that he welcomed the change and was trying to verify Craigslist's official policy going forward. (AP Photo/Craigslist) NO SALES (AP)
--

Two weeks after it "censored" the "adult services" section, Craigslist broke its silence Wednesday to announce that there would be no attempts to revive it. In prepared statements for a House Judiciary Committee hearing on sex trafficking, the company's public relations director, William Clinton Powell, said of the "terminated" section: "Those who formerly posted adult services ads on Craigslist will now advertise at countless other venues. It is our sincere hope that law enforcement and advocacy groups will find helpful partners there." He doesn't sound convinced that there is any chance of that happening, though:

All along, Craigslist's defense has been that it's better to have a socially conscious central hub than to have a diffusion of sex ads across sites that offer little to no oversight. Conveniently enough, a report released earlier today by Advanced Interactive Media Group (AIM) observes the start of the very migration Powell predicts and estimates that nine other classified sites will pull in a total of at least $33 million this year from sex ads. The new king of adult ads, Village Voice Media's Backpage.com, is predicted to rake in $17.5 million this year from ads selling sex.

In addition to calling for Craigslist to shut down sex ads worldwide, anti-trafficking activists will now turn their attention to the sites that are happily picking up the classified giant's slack. If AIM's report and today's hearing made anything clear, it's that there are endless alternatives. As Tina Frundt, executive director of a D.C. center for sex trafficking victims, testified, "every pimp has a MySpace page."