Public opinion and the war in Afghanistan

Does it matter that a majority of Americans believe the U.S. should not be fighting in that country? 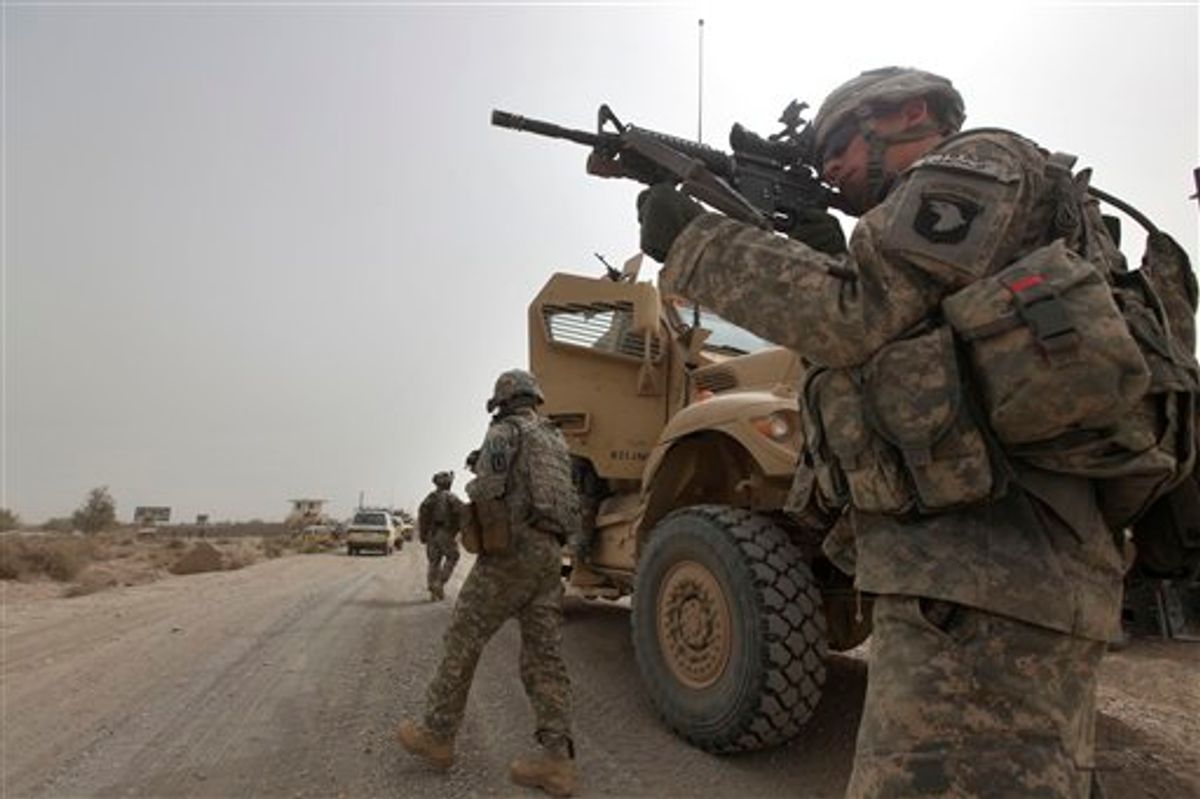 FILE - In this Aug. 26, 2010 file photo, U.S. Army Spc. Cody Borawa, of Unadilla, N.Y., of Tactical Command Post, HQ Company, 2-502 Infantry, 101st Airborne Division, looks for a Taliban position, during a day of joint missions with the Afghan Army, in Zhari district, Kandahar province, southern Afghanistan. Since May, troops from the U.S. Army's 101st Airborne Division have flooded into this region in a bid to disrupt the guerrillas' operations and block them from staging attacks into Kandahar city, the security of which is considered a linchpin of American strategy to win the conflict. But the militants, some from neighboring Pakistan, have brought in hundreds of fighters of their own and stepped up attacks, U.S. officers say. (AP Photo/Brennan Linsley, File) (AP)
--

Opponents of the Iraq War frequently criticized the Bush administration for continuing and then escalating that war even in the face of large majorities which opposed it, culminating in the furor that erupted when Dick Cheney, asked about war opposition, contemptuously dismissed public opinion as irrelevant with his infamously candid: "So?".  Yesterday, a new NYT/CBS poll revealed that 54% of Americans believe that the U.S. "should not be involved in Afghanistan now," while only 38% believe "the U.S. is doing the right thing by fighting the war in Afghanistan now."  This result is hardly unusual; if anything, it's actually better for war proponents than the bulk of recent polls (see August, 2010 AP/GfK poll:  "nearly six in 10 oppose the nine-year-old war as President Barack Obama sends tens of thousands more troops to the fight . . only 38 percent say they support his expanded war effort in Afghanistan"; CNN, September 2009:  "Opposition to the war in Afghanistan is at an all-time high . . . . 57% say they oppose the U.S. war in Afghanistan, with 42 percent supporting the military mission"; UK Independent, July, 2009:  "A majority of the [British] public believes that the war in Afghanistan is unwinnable and British troops should be pulled out immediately").

For those who pointed to public opposition to the war in Iraq as a relevant factor, is there any way to distinguish public opinion against the war in Afghanistan?  None that I can see.  Obviously, the mere fact that a majority believes X does not mean X is the right idea, and since we do not have direct democracy, it also does not prove that X ought to be adopted as policy.  Still, both the perils and immorality of fighting a war which the country's public opposes are well-documented.  If public opinion matters on any issue, it is war, since -- at least in theory -- it is the public which bears the burdens.  That's why, as John Jay explained in Federalist 4, requiring that the American people approve of wars (through their Congress) is essential for avoiding unnecessary wars ("absolute monarchs will often make war when their nations are to get nothing by it, but for the purposes and objects merely personal").  Moreover, it's very difficult credibly to maintain the claim that war is a "last resort" necessary to preserve a nation's security when the majority of that nation's population sees no reason to continue fighting it.

Of course, the U.S. ensures that it can continue to wage as many wars as it wants even in the face of majoritarian opposition by ensuring that the opposition is not very intense or urgent, and that, in turn, is accomplished by ensuring that the overwhelming majority of Americans bear no direct, perceived burden from these wars (the devastating economic impact on most Americans from these wars are typically hidden).  By segregating the dangers of war to a tiny sliver of the population (those who actually fight these wars and their families), it's extremely easy for people to cheer for them and urge their continuation because the vast majority of war supporters have little to lose, and the same is true for war opponents (no marches are needed to burn draft cards because there are no draft cards).  Adam Smith observed long ago, in The Wealth of Nations, how easy it is to cheer for wars -- inevitable, really -- when one has nothing to lose from them:

In great empires the people who live in the capital, and in the provinces remote from the scene of action, feel, many of them, scarce any inconveniency from the war; but enjoy, at their ease, the amusement of reading in the newspapers the exploits of their own fleets and armies. To them this amusement compensates the small difference between the taxes which they pay on account of the war, and those which they had been accustomed to pay in time of peace. They are commonly dissatisfied with the return of peace, which puts an end to their amusement, and to a thousand visionary hopes of conquest and national glory from a longer continuance of the war.

And so it is that we can and do continue to fight wars, going onto a full decade, even with the paradox of clear majoritian opposition (the same NYT/CBS poll found that 71% of Americans believe that the result in Iraq was not worth the costs).  If anything, our situation is worse than what Smith condemned, because most Americans won't even accept higher taxes to pay for the wars they support.  Wars that are perceived as risk-free to most citizens are the easiest to continue waging.

UPDATE:  The New York Times' Charlie Savage reports today that the Obama administration is seriously considering doing something that would be a new low even for them:  in response to the lawsuit brought by Anwar Awlaki's father to enjoin his son's due-process-free killing, the DOJ would invoke the "state secrets" privilege as a means of refusing to tell the court why it is "justified" in killing him and, instead, demanding dismissal of the lawsuit.  I trust that no readers here need any explanation for how despicable that would be, but just to get a flavor, consider this quote from the executive-power-revering, hard-core Bush follower David Rivkin:

The government's increasing use of the state secrets doctrine to shield its actions from judicial review has been contentious. Some officials have argued that invoking it in the Awlaki matter, about which so much is already public, would risk a backlash. David Rivkin, a lawyer in the White House of President George H. W. Bush, echoed that concern.

"I'm a huge fan of executive power, but if someone came up to you and said the government wants to target you and you can't even talk about it in court to try to stop it, that's too harsh even for me," he said.

It won't, however, be too harsh for hordes of Obama followers if the DOJ proceeds to do this.