Two of this year's most tragic stories have one thing in common: They remind us of our own powerlessness 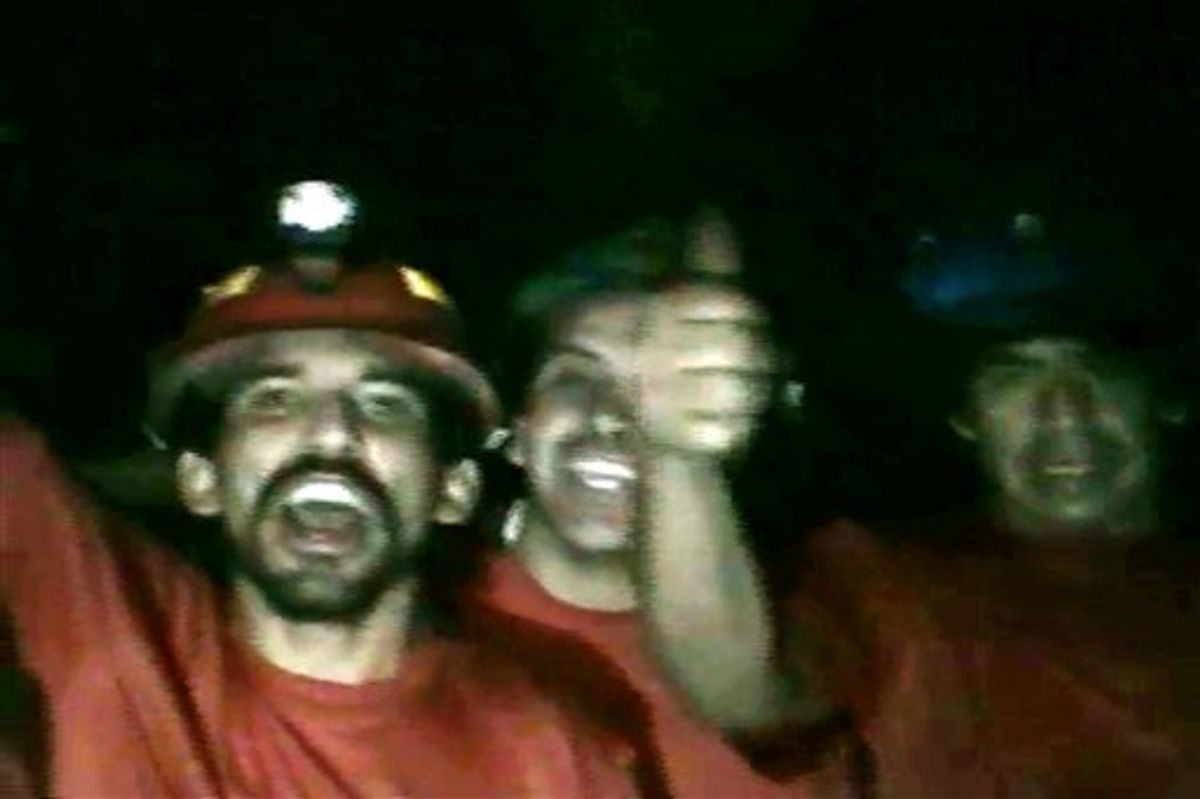 In this TV grab taken from a video released by Chile's government on Tuesday, Aug. 31, miners react inside the San Jose mine in Copiapo, Chile. Thirty-three miners have been trapped deep underground in the copper and gold mine since it collapsed on Aug. 5. (AP Photo/Chile's Government Video) (AP)
--

The splashy media world of round-the-clock disaster does not lend itself to footage of people standing around and waiting. High speed chases, dramatic footage, anything that lends itself to the phrase "caught on tape" – that's the stuff that gets eyeballs. So what happens when two of the most wrenching stories of the year thus far have been the ones that have unfolded at an agonizingly suspenseful pace? First, there was the BP Gulf disaster, which kicked off with a fiery explosion in April but developed over the last several months into an untelegenic saga of containment and cleanup. More recently, there's been the incredible story of 33 Chilean miners, who have been trapped underground since August 5 – and who may well be there for months more before rescuers can free them.

Sure, if it bleeds, it leads, and all those news cameras can't hold our attention forever if they're pointed at a stagnant oil slick or a collapsed mine. (The phrase "still waiting" doesn't generally follow "Our top story tonight…") But it's not just our short attention spans that are suffering here.

When disaster strikes, whether it's on the epic scale of an earthquake in Haiti or the intimate one of sudden sickness or injury, the human impulse is to spring to action. Our bottomless appetite for watching Anderson Cooper swoop in to save the day or George Clooney  rally us together for a telethon may not be sated, but it's the deeper hunger to make things right that aches the most. We don't do helplessness well. We see something terribly wrong – birds dying on the beach or men stranded just out of our reach – and we want to fix it. When a force of nature or sudden act of terrorism knocks the wind out of us, we don't have time to despair. When a man is stuck underground instead of attending the birth of his baby daughter, we do.

There's a reason that we humans decided that one of the cruelest forms of torture we could invent was the death of a thousand cuts, why we say "At least it was quick" when we talk about mercy during a terrible tragedy. A slow, steady trickle of pain is a torment that could kick the daylights out of any Michael Bay-sized catastrophe. Because asteroids don't hit the earth every day, but the pain of waiting, the terror of not knowing, and the horrible possibility that sometimes, there isn't a damn thing we can do, these are things we all have faced. It doesn't make for great TV, and it doesn't lend itself to tidy resolution.

There will, and we ardently hope it's soon, come a day when 33 men emerge into the sunlight. But we won't have one perfect, magical moment when New York's ground zero stops being a place of painful memories, when New Orleans will look like it did before Katrina, when Haiti unveils itself in some new dramatic incarnation or the Gulf of Mexico is suddenly all better. Help and healing don't work that way. They demand the utmost of our endurance and test the limits of our patience. They make us hold our breaths and they break our hearts. Because most us would gladly stomp out a fire to save a life, but to hang on to hope, day after exhausting day? That takes everything we've got.