The sexpot performer is endlessly bubbly, a consummate professional -- and the most American pop star around 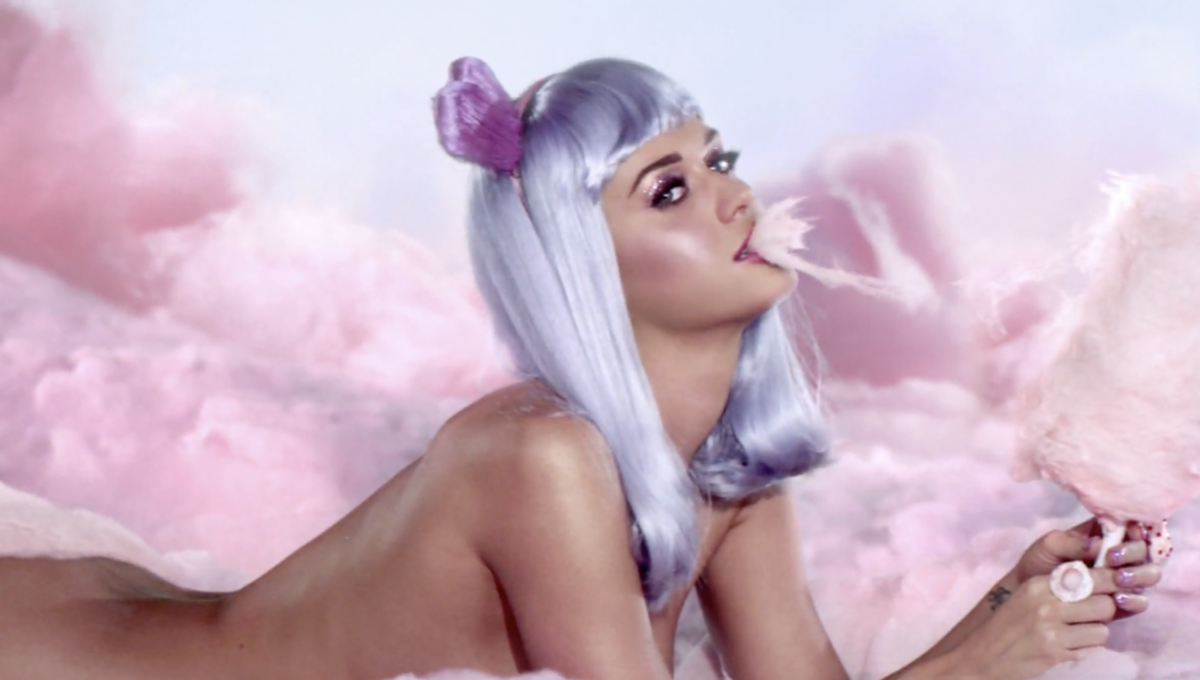 Katy Perry in her video for "California Gurls"
--

Katy Perry does not dabble in Bad Romance. She is not Hard. And no one tries to make her go to Rehab. Unlike her pop peers, the wide-eyed 25-year-old California Gurl is a Teenage Dream. She wakes up in Vegas. She kisses a girl, "just to try it." Wheeeeeee! After dominating the summer with not one but two unstoppable, earworm hits, her latest album is at the top of the Billboard chart, sitting daintily right above that crankypuss Eminem. A girl like that has a boatload of hate coming her way.

Perry didn't help matters when she performed at her old high school Tuesday and spotted a former crush in the crowd. Acting on the secret fantasy of every girl who ever thought "My So-Called Life" was exactly about her; she called him out, saying, "You were the most popular kid in my class! But you never wanted to date me." Perry then segued into her emasculating anthem, "Ur So Gay," a lightly homophobic romp that chastises its protagonist for not merely being "so gay," but not even liking boys. Clearly somebody forgot the line from "Best of Youth," "Are you happy now? Then it's time to be generous."

You can see why critics like the folks at Gawker might refer to her as "the living worst." It's not just that she's pretty, she's famous, and she's got a rack that goes on for days. It's that she represents for certain listeners everything they clawed their way out of their hometowns to get away from: a former Christian vocalist who can still get mighty uppity when she smells blasphemy. And, ugh, why is she smiling all the time? Lady Gaga is raw, bloody meat. Katy Perry is candy.

And the music itself? Just don't think about it too hard. In his terrific "Talking to Girls About Duran Duran," Rob Sheffield defines '80s pop music by saying that "the songs do not belong to the singer, not the way a James Taylor or Stevie Wonder song does. They don't sound like a person expressing a feeling -- they sound like a gigantic sound machine blowing up this feeling to self-parodic heights." That's the Katy Perry canon in a nutshell. You're hot and you're cold! You're yes and you're no!

Yet everything that might make you throw up a little in your mind about Katy Perry is everything that makes Katy Perry the biggest thing in the universe right now. She's an acutely American fantasy figure, a lady who has invented herself in the image of Betty Draper crossed with a Disney princess with just a quickie detour into shopping mall punk. She's naughty but not too naughty -- a diet-breaking slice of cake wrapped in a slightly-too-low dress inside a car that's going just above the speed limit. It's as if, at long last, Santa and the Baby Jesus have given us the Britney we had so hoped Britney would be, before she turned out to be just a mediocre singer with a penchant for questionable decision-making.

Perry won't let America down by going to rehab or shaving her head. This is a woman who can get engaged to a recovering sex and drug addict and still look like she should be surrounded at all times by talking animals. This is -- significantly -- a consummate-to-the-point-of-absurdity show woman. As another great entertainer once sang, she works hard for the money.

The idea of anybody being that goddamn cheery can be unnerving at best, but that's the spirit of the can-do U.S. of A. for you, you betcha. Even the most emo among us sometimes yearn to be the one to walk in the sun -- especially at those moments in our history when the economy and the environment and the whole political system itself seem to be going to hell in a tea bag. We can't help it, we are the nation that built the pursuit of happiness into our mission statement. Perry represents all of that; she's baseball and minivans and pinup girls. And she's something more -- a plucky Rosie the Riveter of pop, producing catchy hits the way Nabisco cranks out Triscuits. She's not just the teenage dream, she's the American one.