She opened the door holding nothing but a hand towel. Would I ever see her again like this, sturdy and unashamed? 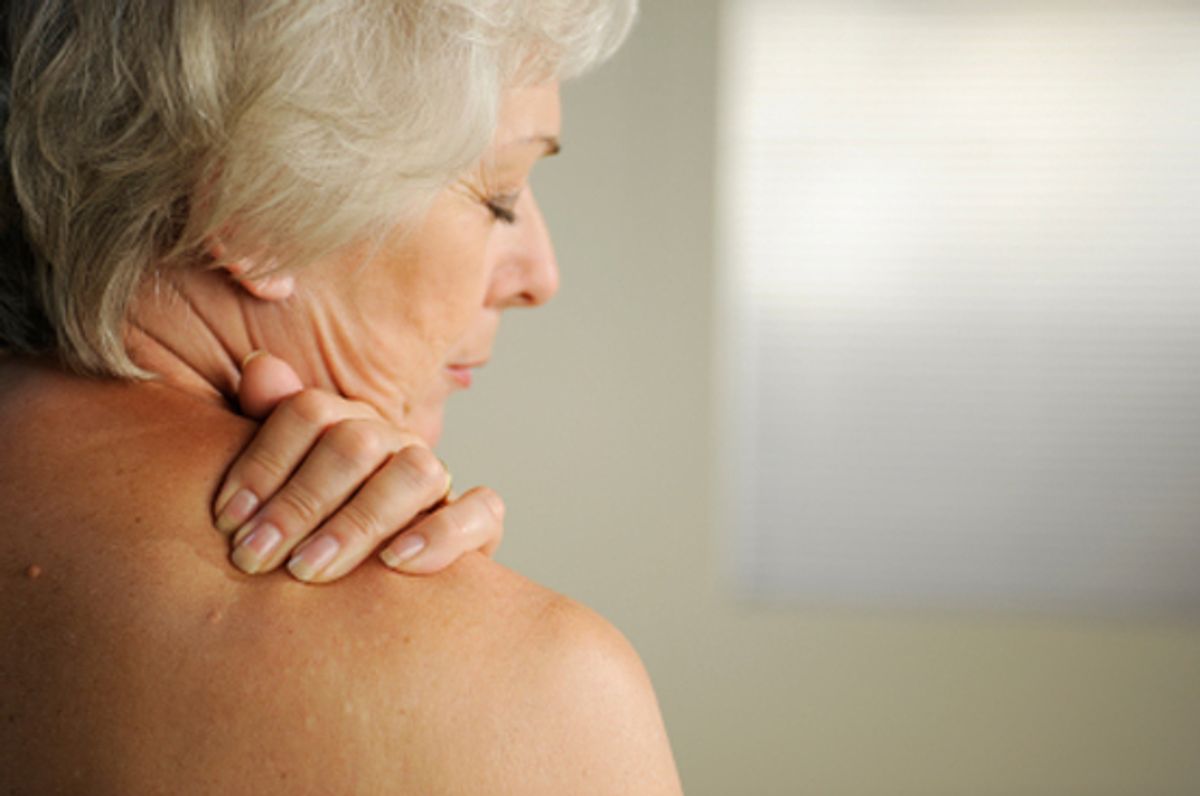 I saw my mother naked five months ago. My aunt was visiting and I stopped by. I rang the doorbell and after a bit my mother appeared on the other side of the screen door, a hand towel covering the front of her naked body. She had just gotten out of the shower and simply ran to the door to let me in.

I followed her sagging backside into the bedroom where Aunt Lois, recovering from back surgery, lay propped up in the bed. I sat down in a chair beside the bed, chatting with the two of them, while my mother dropped the hand towel and proceeded to dress.

I saw her flattened breasts, her fold-over belly, the patch of hair between her legs, her dimpled thighs, dumpling knees tapering to pudgy ankles, and dainty feet tucked into the fluffy, blue scuffs I remember buying her last Christmas. It struck me as funny that the toughest part of her -- the soles of her feet -- were protected, while the tenderest parts of her were exposed. Because I'm adopted I have no map for aging, but looking at her body I could see myself, as the generic old woman we all become, regardless of size or shape. (It is fortunate, however, that we appear similar -- short with dark hair. I tell her she's lucky she didn't get some tall blond girl.)

Prior to this, I had last seen my mother naked 30 years ago and further back, walking in on her while she prepared for work or for bed,  in pale flashes as she darted toward the laundry room in search of undergarments. I've seen my daughter in flashes too, but not full-on since adolescence, when her body became one of the secrets she kept from me.

I've seen most of my close girlfriends naked as well. Ellen and Mary Tom in high school, after gym class. Sue five years ago when she had surgery to cure her Ménière's disease, getting her into her hospital gown, dressing her to leave. Tracy when she had her boob job. Before the augmentation, in an attempt to convince us of its necessity, she pulled her top down to show us the horror of her breasts. After surgery, she unwrapped the bandage to show us the horror of the new ones, healing. They looked as hard as armor, which, I suppose, was the purpose all along.

I was helping Tracy and Kendra in their painting business at the time, and upon seeing the much-inflated chest, Kendra exclaimed, "Oh my Lord! You know you're going to have to haul those things up a ladder!" Since the enhancement, Tracy has grown comfortable wearing more fitted tops and I can't see her cleavage without thinking of  two heavy buckets of paint.

I saw Aunt Lois naked only a month after her visit. Following additional back surgery, she caught an infection and suffered a massive stroke. In the hospital, her body was treated like a large baby doll, initially cooed over, and then, when the novelty wore off, tossed into a corner. Once the medical profession determines your condition is depressingly ordinary and inglorious, that recovery or death will be slow and boring, without redemptive arc, they quickly lose interest in you.

As we rolled my aunt, and adjusted her position to keep her comfortable, her loosely fastened gown often slipped, exposing her fully. I was struck by how quickly somebody becomes a mere body. Ignobly asexual. Everyone pretending to be cavalier and professional about the medical nudity, when, really, we're all mortified and terrified by the evidence of human decay.

It brought back painful memories of my Nannie's stroke and 10-year decline. Her beloved skin gradually slipping from her muscles, puddling on the bed, moving toward the ground, as if flesh understands the gravity of graves, and, when it is tired, it longs to return to the dirt. That's as much grace as I'll allow the process of dying; there is no cruelty in it, just homesickness, a weariness of travel.

I told my husband about the morning, the shock of seeing my mother's body, and we laughed together. The absurdity of it! My mother  -- the Republican Methodist, who never swears, loves her poodle perm and Merle Norman, wears Easy Spirits and jeans that zip all the way up to her rib cage, who drinks Kahlua and cream but only on special occasions -- greeting me at the door, naked! Amid the amusement, it came to me, suddenly and painfully, that I would likely never see my mother naked again. Not like that. Upright, on sturdy legs, unashamed and smiling. I felt it as deeply as if I had already lost her and was merely remembering the morning from a place far into the future. (I do that a lot. Grieve in advance so that when tragedy actually hits, I might get credit for the time I've already put in. It doesn't work. I keep doing it.) Prematurely heartbroken over my mother's death, I did what I always do when inconsolable. I made pie.