The Tea Party: Winning in spite of itself

Plenty of the movement's candidates will be elected. But let's be clear on what it does -- and doesn't -- mean 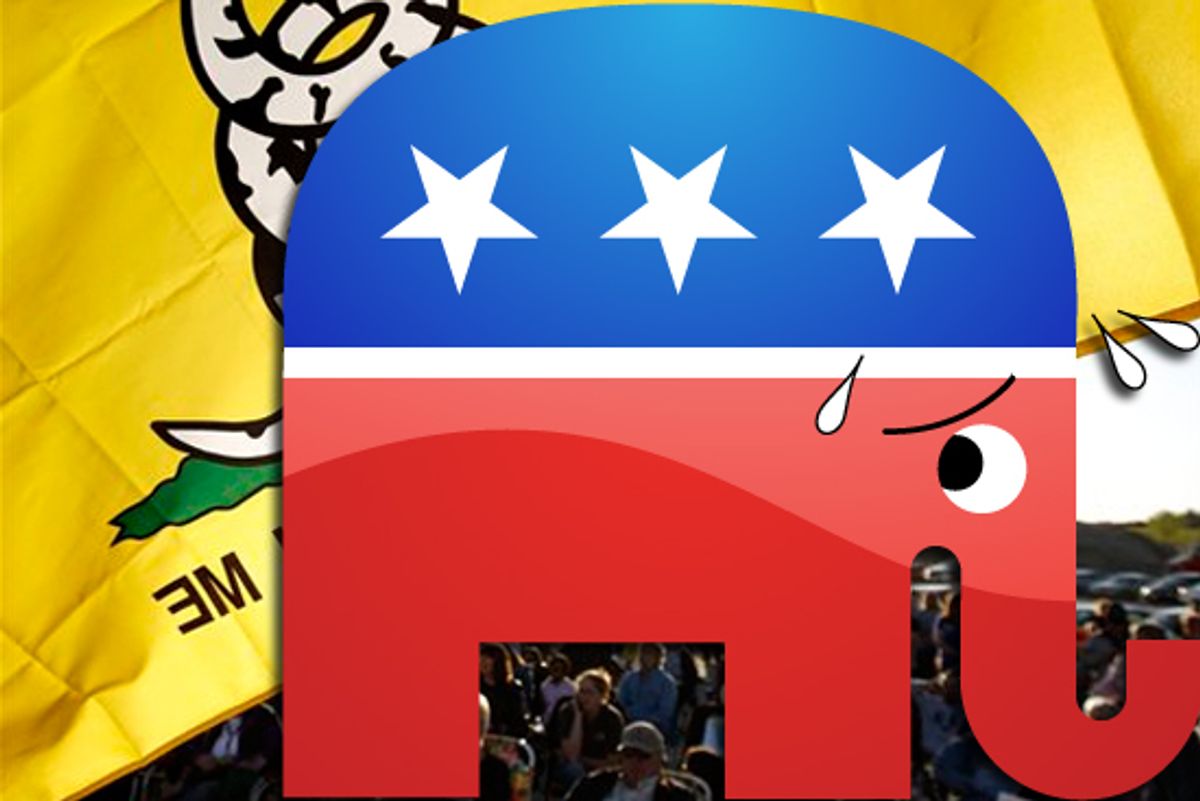 In the wake of Christine O’Donnell’s upset win on Tuesday, I’ve been struck by how many times I’ve heard someone say some variation of the following: "Well, it should mean that the Democrats will now win Delaware, but then again, look at the polls in other states where Tea Party candidates have been nominated -- they’re winning!"

This reminds me of the smartest thing I ever heard Bobby Cox, the longtime Atlanta Braves manager, say: "Don’t confuse favorable outcomes with good decisions." Cox was talking about baseball strategy, but his line applies just as well to the GOP’s decision to nominate so many Tea Party candidates for the Senate this year. Sure, plenty of them are going to win -- but it will be in spite of their Tea Party credentials, not because of them.

Look at it this way: In eight Senate races, Republicans have nominated non-incumbent candidates championed by the Tea Party movement. In these races, the GOP candidates’ Tea Party affiliations are a factor, but they are not the only factor. The partisan and ideological make-up of the electorate is even more relevant, and it also matters whether it’s an open seat contest or a race against an unpopular Democratic incumbent. A distinction also has to be drawn between Tea Party candidates who simply espouse the movement’s ideology, and those whose own behavior and biographies conform to the kooky stereotype of a Tea Party adherent.

Thus, it really means nothing to say that a Tea Party-backed candidate, Mike Lee (who knocked out incumbent Sen. Bob Bennett at a party convention in May), is the overwhelming November favorite in Utah. After all, we’re talking about what is now an open seat contest in one of the most conservative states in the country -- and in a year when the political climate is poisoned against Democrats. So of course Mike Lee is going to win. Bennett would be a shoo-in too had he survived the convention and primary.

The same basic logic applies in Alaska, where Joe Miller took out Sen. Lisa Murkowski in an August primary and is now strongly favored to win in November. Do you know how rare it is for a Democrat to win in this state? Only after Ted Stevens was convicted on corruption charges a week before the election in 2008 (a year in which the climate was unusually favorable for Democrats) did Mark Begich pull out a narrow 3,900-vote victory. And only because the Republican base was divided by the presence of a right-wing third party candidate in the 1994 gubernatorial election (this was a consequence of Walter Hickel’s third party victory in the 1990) did Tony Knowles eke out a 546-vote triumph in 1994. And that’s it; those are the only two Democrats to win major office in Alaska in recent history.

So of course Miller is now ahead of Democrat Scott McAdams. What is more notable is how close the race is, at least in polling conducted a few weeks ago. One survey put Miller up by eight points, and another showed him ahead by six. In these surveys, at least, Miller is underperforming substantially based on how a generic Republican in Alaska in 2010 should be faring. But still, assuming Murkowski doesn’t follow through on her threats to wage a write-in campaign, Miller should be fine in November, and his margin figures to grow between now and then. But that margin also figures to be less than it would be for another Republican.

The situation is a little more fluid in Kentucky, where Rand Paul leads Democrat Jack Conway by seven points in the most recent poll. Democrats have had far more success winning in Kentucky than in Utah or Alaska, although the electorate is conservative -- and particularly Obamaphobic. So the fact that Paul is ahead isn’t really surprising. But a generic Republican would probably be ahead by a lot more than seven points in this race. Indeed, pre-primary polls showed Tray Grayson, the bland candidate of the GOP establishment, running much stronger than Paul against Conway.

Kentucky, then, is a perfect example of how the Tea Party can complicate the GOP’s prospects in a Senate race without actually costing them the race. If Grayson had been the GOP nominee, Kentucky wouldn’t even be on anyone’s radar; he’d be far ahead in polling and a shoo-in for November. But Paul, with his civil rights gaffe and fringe image, makes some GOP-friendly swing voters uncomfortable -- just enough to put Conway within theoretical striking distance, but probably not enough to lift him to victory.

Then there’s Florida, Pennsylvania and Colorado. Each state is far friendlier to Democrats than Kentucky, Utah and Alaska. So this is where the Tea Party costs the GOP seats, right? Well, probably not. Marco Rubio in Florida, Pat Toomey in Pennsylvania and Ken Buck in Colorado are all leading the polls, although their margins are hardly overwhelming.

The reason: They are far more marketable as statewide candidates than some of the other Tea Party candidates who have been nominated. Rubio is an unusually persuasive communicator, Buck boasts an impressive resume, and Toomey is a seasoned political veteran who’s won congressional races before. In other words, they all know how to handle themselves under the media spotlight -- and how to avoid the kind of traps that an amateur like Paul might fall for. Being so presentable makes it much easier for them to win the benefit of the doubt from swing voters who are inclined this year to vote against Democrats. They may embrace the Tea Party’s ideology, but to most swing voters, they don’t come across as kooks. In a different year, their ideology alone might cost them with these same voters; but probably not in 2010.

Which leaves us with the two states where the Tea Party is most likely to actually cost the Republicans seats: Nevada and Delaware. In both states, the GOP is fielding candidates – Christine O’Donnell in Delaware and Sharron Angle in Nevada – who subscribe to Tea Party ideology and who embody the kookiness of the Tea Party stereotype. Plus, Nevada is a swing state and Delaware is a Democratic-leaning one. The factors that are likely to cancel out the Tea Party liabilities of GOP candidates in other states aren’t nearly as present in Delaware and Nevada. This is particularly true in Delaware, because it is an open seat contest.

Nevada is more complicated because of the presence of Harry Reid, a four-term incumbent and the face of the Democrats’ Senate leadership. With just about any other Republican running against him this year, Reid would be doomed: His own unpopularity and the eagerness of Nevada’s swing state electorate to vote against Democrats would have been more than enough to doom him. A generic Republican would be pounding him right now. But the presence of Angle has transformed the race into a 50-50 fight. It is very possible that Angle will end up winning by a point or two. It is equally possible that she will end up losing.

In the past few weeks, many pundits have cited Reid’s inability to pull away from Angle as a sign that the Tea Party is less toxic than assumed. Baloney. Reid was never going to pull away from her and win by a significant margin – not in Nevada, not in 2010, and not with his own enormous liabilities. To be in a 50-50 race in the middle of September is for Reid a gravity-defying feat. And it has everything to do with Angle’s Tea Party baggage.

Too many pundits seem to believe that because candidates like Paul and Angle are not getting blown out, it means that the Tea Party isn’t a drag on the GOP. But this thinking assumes that just about every general election voter is up for grabs at the start of a campaign -- that they look carefully at both candidates and give them equal consideration, then decide. But that’s ridiculous. Most votes are locked in place from the get-go; the pool of authentic swing voters is tiny. So even if the Tea Party does hurt the GOP with these voters, there are going to be plenty of states where it just won’t affect the overall outcome. And if Tea Party-ism becomes the new norm for the GOP, it figures to hurt them even more in future elections among these swing voters. This year’s anti-Democratic political climate is rare. In those elections, it will probably cost them more than one or two states.