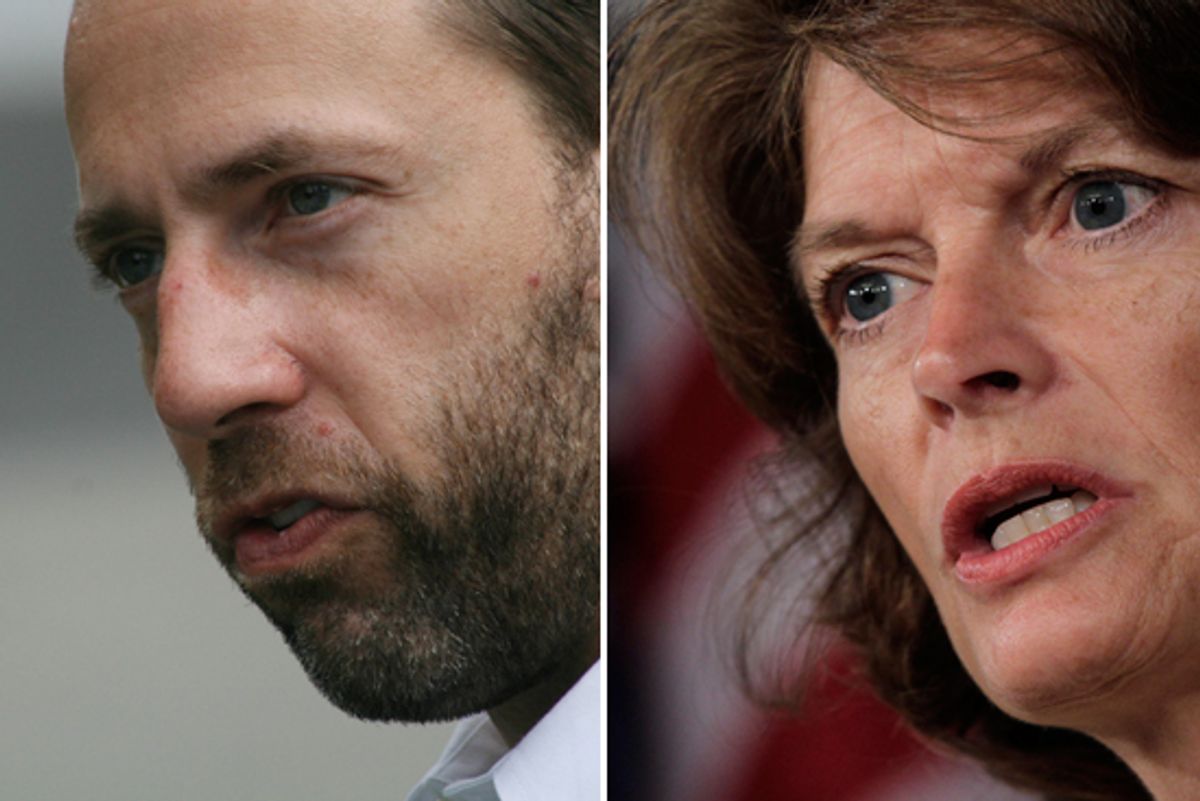 Let's get the obvious out of the way first: There is just about no reason in any election year to believe a Democrat has a shot at winning a Senate seat in Alaska -- let alone in 2010, when a powerful anti-Democratic tide seems likely to turn the state, already one of the nation's most Republican-friendly, even more red.

That's why when Sen. Lisa Murkowski, after suffering a stunning loss to Tea Party favorite Joe Miller in the August 24 GOP primary, decided against seeking a third party nomination, I felt safe in penciling in Miller as the state's next senator.

What I didn't see coming, though, was Friday afternoon's news: Murkowski has decided to run a write-in campaign in the general election. Which means that Democrats might actually have a chance at an utterly improbable Senate seat pick-up.

The logic goes something like this: Murkowski probably can't win, since her name isn't on the ballot (and since it figures to be hard for some voters to spell). As Taegan Goddard helpfully notes, only one senator has ever been elected as a write-in candidate, Strom Thurmond in 1954. But what Murkowski can do is drain Republican and Republican-friendly votes away from Miller, dragging down his total and -- potentially -- allowing Scott McAdams, the Democratic nominee, to win with substantially less than 50 percent of the vote.

Believe it or not, there is a precedent for this in Alaska. In 1994 -- the last election cycle in which the national climate was as favorable to the GOP as this year's is -- Democrat Tony Knowles took advantage of a three-way race to win an open seat election for governor by a tiny 536-vote margin. The Republican base was split in that election because of the presence of Jack Coghill, a longtime conservative Republican who had left the GOP four years earlier to serve as Walter Hickel's running-mate on the Alaska Independence Party line. Hickel won that election but, after abandoning the AIP's secession-focused agenda, left the party and declined to seek a second term in 1994. But Coghill stayed loyal to the party and claimed its gubernatorial nomination in 1994.

Against Knowles and moderate Republican Jim Campbell, Coghill siphoned off 13 percent of the vote, mainly from conservatives who otherwise would have voted for Campbell. Consequently, Knowles was able to prevail with just 41 percent of the vote. It was the closest gubernatorial election in Alaska history -- and the only race in the "Republican Revolution" year of 1994 in which a Democrat claimed a GOP-held governorship.

Granted, the dynamics of Alaska's new three-way race are slightly different. This time, the GOP nominee, Miller, occupies the hard-right turf; so while it's likely that Murkowski will attract some Republican votes in the fall, she might also draw significantly from McAdams, since she will presumably campaign as a moderate. Plus, Murkowski, a sitting senator, may be a more credible candidate that Coghill, even though she's relying on write-ins. It's not impossible that she'll gain enough traction to marginalize McAdams.

Still, the fact that it's the middle of September and there's a not-implausible scenario in which a Democrat can win an Alaska Senate race is a rare piece of good news for the party in this otherwise dismal year.