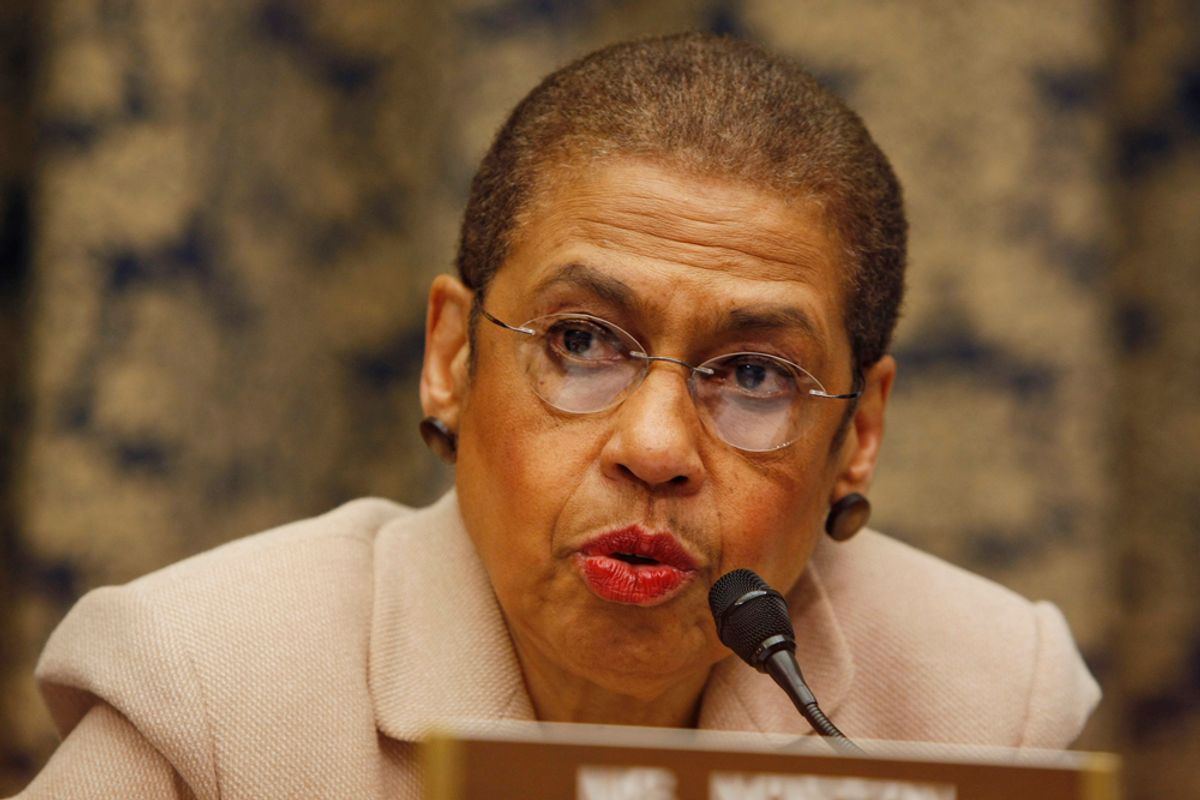 (UPDATED)Everyone knows that Washington is drenched in special interest money, and that members of Congress regularly grovel to those special (often corporate) interests for a bigger share of that money. But it can be illuminating to on occasion take a close look at how it all works.

This week we have a pretty raw example of a member using her position of influence over a particular policy area to demand money from a lobbyist. It comes in the form of a voicemail left by Rep. Eleanor Holmes Norton (D-DC) to an unnamed lobbyist, the audio of which was given to Andrew Breitbart's Big Government website by an unnamed source.

(Nota bene: Yes, Breitbart has a history of malicious deception. But Holmes Norton has acknowledged that the voicemail is authentic. It's worth listening to.)

Here it is, with transcript below

This is Eleanor Norton, Congresswoman Eleanor Holmes Norton. I noticed that you have given to other colleagues on the Transportation and Infrastructure Committee. I am a senior member, a twenty year veteran and am Chair of the Subcommittee on Economic Development, Public Buildings and Emergency Management. I’m handling the largest economic development project in the United States now, the Homeland Security Compound of three buildings being built on the old St. Elizabeth’s hospital site in the District of Columbia along with fifteen other sites here for, that are part of the stimulus .

I was, frankly surprised to see that we don’t have a record, so far as I can tell, of your having given to me despite my long and deep work. In fact, it’s been my major work on the committee and subcommittee it’s been essentially in your sector.

I am, I’m simply candidly calling to ask for a contribution. As the senior member of the committee and a subcommittee chair, we have (chuckles) obligations to raise funds. And, I think it must have been me who hasn’t, frankly done my homework to ask for a contribution earlier. So I’m trying to make up for it by asking for one now, when we particularly need contributions, particularly those of us who have the seniority and chairmanships and are in a position to raise the funds.

When Norton touts her seniority as part of her fundraising pitch, she gets into territory that is at the very least untoward.

Here is Norton's statement on the voicemail, in which she attacks Breitbart and says that her pitch was business as usual -- which is precisely the problem.

The conservative blogger, Andrew Breitbart, best known for his misinformation concerning Shirley Sherrod, is trying to mislead again. He is circulating a voice mail of a standard request made by candidates to potential donors who do not know the candidates or their work. Norton, therefore, identified herself as a subcommittee chair and the kind of work she has done in subcommittee. Norton is a longtime supporter of public financing of campaigns, but barring that, candidates from all parties regularly raise funds in calls by first identifying who they are and what they have done. The call was made from campaign headquarters. Her request fully complied with legal and ethical requirements.

UPDATE: Several commenters have pointed out, accurately, that Norton is not a full member of Congress because she represents the District of Columbia. She does not have a vote on the House floor, but she does get to vote in committees, which was the subject of the fundraising call. See her committee assignments here.