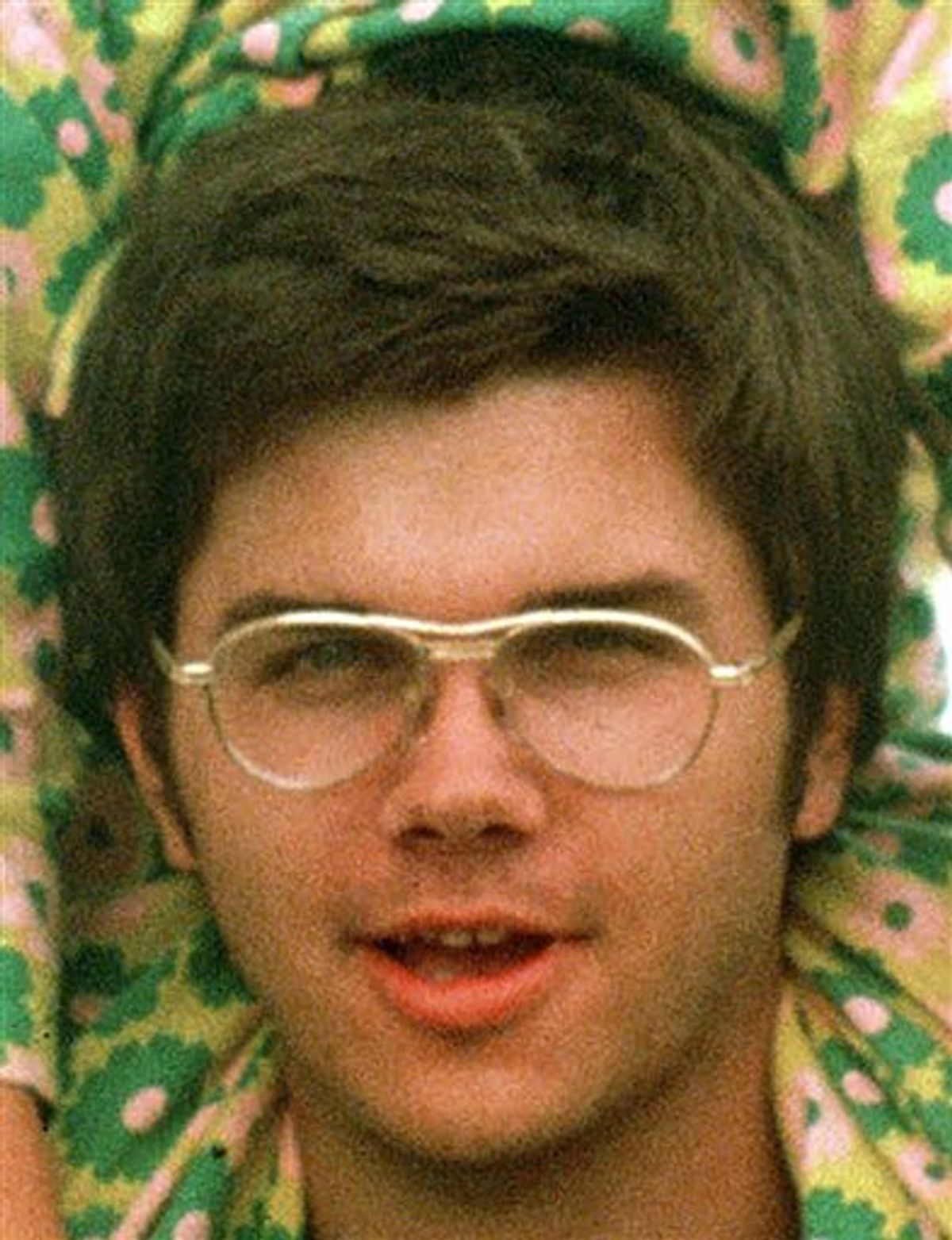 FILE - In this 1975 file photo, Mark David Chapman is seen at Fort Chaffee near Fort Smith, Ark. John Lennon's killer will seek his freedom for a sixth time in an interview before a parole board as early as Tuesday, Aug. 10, 2010. A parole hearing for Chapman, now 55, is scheduled at Attica Correctional Facility, the upstate New York prison where he has been held for nearly 30 years. Lennon's widow, Yoko Ono, continues to oppose Chapman's release. (AP Photo/Greg Lyuan, File) (AP)
--

Before the Internet, it was a lot harder for crazy people to get attention. On a December night in 1980, Mark David Chapman stood outside an Upper West Side apartment building and put four bullets into a Beatle. His admitted motive – one that has not wavered in all the ensuing years – seemed a peculiarly cruel anomaly then. He was chasing fame. Thirty years later, who isn't?

Speaking to Larry King a decade ago, Chapman talked about the "rock bottom" self-esteem of celebrity stalkers, noting, "They feel that by writing fan letters or actually coming in close contact with a celebrity, they feel important. If you have nothing to start with, and your life consists of fantasizing about celebrities or being with them, that can become very dangerous. And that is a phenomenon in this country now that has to be addressed." This may sound strange, but that psycho killer has a good point.

Earlier this month, Chapman was up for -- and denied, for the sixth time in his three decades behind bars at Attica -- parole for the killing of John Lennon.  His recent hearing gives new insights into the mind of a man who has had a lot of time to think about his actions, who's most certainly been well coached by his attorneys, and who predictably attributes his salvation to Jesus, but who nevertheless possesses a perverse amount of insight into the cult of celebrity. At his hearing, Chapman spoke of choosing Lennon not because of a fixation on the former Beatle in particular, but because "by killing John Lennon I would become somebody." He had also considered Johnny Carson and Elizabeth Taylor -- "They were famous. That was it." He chose the musician because he was "more accessible," and his motive was simple. "Instant notoriety. Fame."

Most people don't have "rock bottom self-esteem" or an obsession with "Catcher in the Rye." Most don't go on to commit second-degree murder. But access is easier than ever. Reality TV can make you famous for being tan or having lots of kids. And anybody with access to Twitter can have the illusion of proximity to stars. This week the charity initiative Twitchange has been auctioning off the chance to be followed, retweeted, or mentioned by dozens of celebrities on Twitter, all in the name of rebuilding Haiti. It's all for a good cause, but it does say something about where we are now that 140 characters of attention from Mario Lopez or Eva Longoria is considered a desirable commodity.

The fact that movie stars are not routinely gunned down makes it clear that Chapman's particular brand of mental illness hasn't become epidemic. But his weird notion that getting on TV or a mention on the news is the eminently desirable has taken off like gangbusters. The difference between today and 1980 is that you don't have to kill to get a celebrity to notice you. You can just buy that. But as John Lennon's killer explains, "Somebodies are people that have worked for their fame [and] achieved something special." Chapman knows, despite his ability to get in the papers, "I am not anybody special."