My mother is a hoarder

As a child I was torn between my anger and my need to protect her. Back then, there was no A&E show to explain it 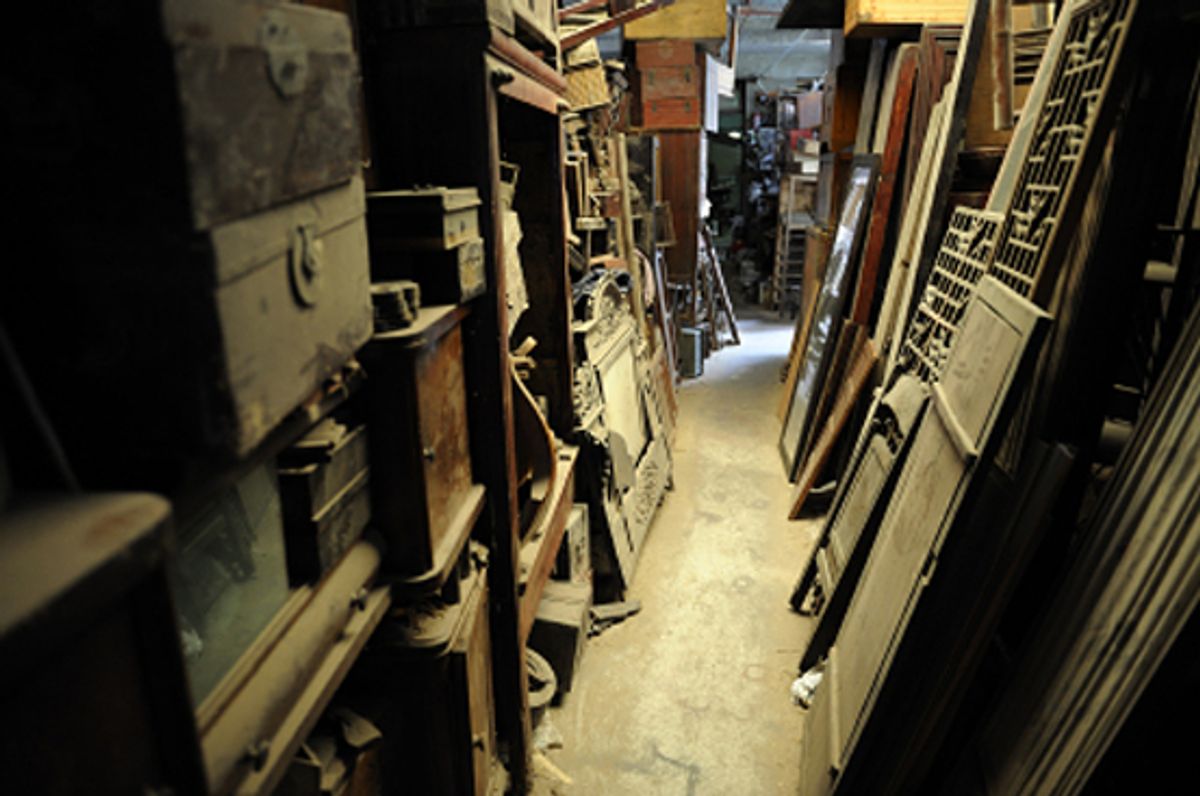 My mother wasn't always a hoarder. In pictures from before I was born, I can see an almost sterile home. There is no clutter, there are wide open spaces. I was 3 years old when my mother developed an interest in antiques. Later that year, my oldest brother was killed in a car crash, and my family imploded. One brother left home, another enlisted in the Navy, another brother got involved with drugs. The youngest of the boys was in high school. My sisters were 11 and 9 when my brother died. But my mother's way of dealing with her loss was to become an "antiques collector." She was a child of the Depression, and the tendency to hold on to things hearkened back to a poor childhood. But, in reality, what she collected was mostly junk.

My father complained endlessly about the ever-increasing piles of stuff. My mother countered that this was her hobby. I was about 10 when I realized my house wasn't normal. Back then, we didn't have a show like A&E's "Hoarders" to explain this was an OCD disorder. Instead, I would fret about the dust and dirt. I may have been the only sixth grader who ran home from school to clean. I kept the living room, dining room, kitchen and bathrooms sparkling. During this time, one sister got involved with drugs and the other got married at age 18 -- to escape our house. My mom started doing flea markets twice a week. During the summer, I was forced to go with her and help, even though there were no prices on things, the booth was overflowing, and there were outhouses for bathrooms. I did an accounting of her costs -- what she took in versus what she spent -- and she didn't even break even. Her "hobby" was an ever-consuming need. The need grew larger and larger.

After every personal crisis, more stuff would appear: After my brother or sister went to drug rehab, after some nasty argument between my mom and dad. The basement filled up, then the den, the attic, and the garage filled to the ceiling. It was hard to stake out my territory and keep my own space from being overtaken. My mother would buy pieces of furniture saying she was going to resell them, and they wound up in my room or my sister's room. Furniture lined the walls. Furniture was placed in front of other furniture, stacked on top of other furniture. Even the drawers became repositories for smaller "collections." Do you know how many silver spoons can fit into one drawer?

In college, I was desperate to escape the house, but I was also protective of my mother. My father dragged us all to family counseling. He complained about the lack of space and the difficulty in cleaning. So did my sister and I. But the idiot therapist said it was my mother's house, that she should be able to do what she wanted. No consideration that it was my father's house. No consideration for my sister's and my feelings. It was put up or shut up. So I shut up, but I also stopped cleaning obsessively.

It's hard to explain the conflict that lives in a child of a hoarder. I used to have fantasies of getting the house completely clean and making my mom and dad very happy. After all, my mother would always complain that we never helped her. But if we tried to straighten up, she would complain that she couldn't find anything. We were never, ever allowed to throw anything out. She would check the trash to make sure we didn't get rid of anything. It was her house and her things -- and yet, there was some cognitive disconnect between caring for her house or her things. She had never claimed any responsibility for the massive pile of junk that accumulated in the house, the yard, the garage -- even cars left in the driveway would get boxes placed in them. To vacuum and dust was a major undertaking. There were knickknacks everywhere. Boxes, books, dolls, china, my mother's specialty linens. Do you know how much mold and mildew linens acquire in a damp basement? People entering the house would sometimes turn around and leave. It took me a long time to stop wanting to help my mother, to realize that there was no helping her at all.

When I got married and moved to my own home, Mom filled up the areas I had always kept cleaned -- the living room, dining room and kitchen. My dad also divorced my mom, after 43 years of marriage. He just couldn't take it anymore. Dad was 72 when he joined the Peace Corps and was sent to the Solomon Islands. He was thrilled to have one suitcase to carry all of his possessions. I guess spending years of your life walking in an obstacle course would make a person appreciate the freedom of fewer possessions. Around this time, my mom also received a notice from the township about the junk in the yard. The yard got cleaned, then inevitably it would fill back up until the township would complain again. In my mom's eyes, it was the neighbors' fault.

Thanks to my mom, I do have an appreciation of quality furniture and antiques. Thanks to my mom, I struggle on a daily basis to not accumulate items. I throw many things out. I have a two-box pile of "treasures" in a spare bedroom, and you can walk through the rooms in my house without tripping. But I am always on the lookout for moments when I hold on, a bit too hard.

Mom has Alzheimer's now. She built a cocoon of belongings around her, and now the cocoon is around her mind. Her bedroom, living room and hallway are not as cluttered as before, because Mom needs to use a walker to get around. But the den and cellar are still wall-to ceiling junk.

How do you explain the mental illness that is hoarding? It can be so heartbreaking, intolerable and damaging. I love my mom, but I still harbor so much hurt that her love of stuff trumped her love of her children, her grandchildren and especially my dad.

It's been so bittersweet watching A&E's show "Hoarders." Watching these people accumulate things -- food, animals, trash, anything -- it seems so clear that the goal is to fill space, to cover some gaping void. I think I'm finally realizing Mom didn't make a choice -- it was just her imperfect way of coping with life.