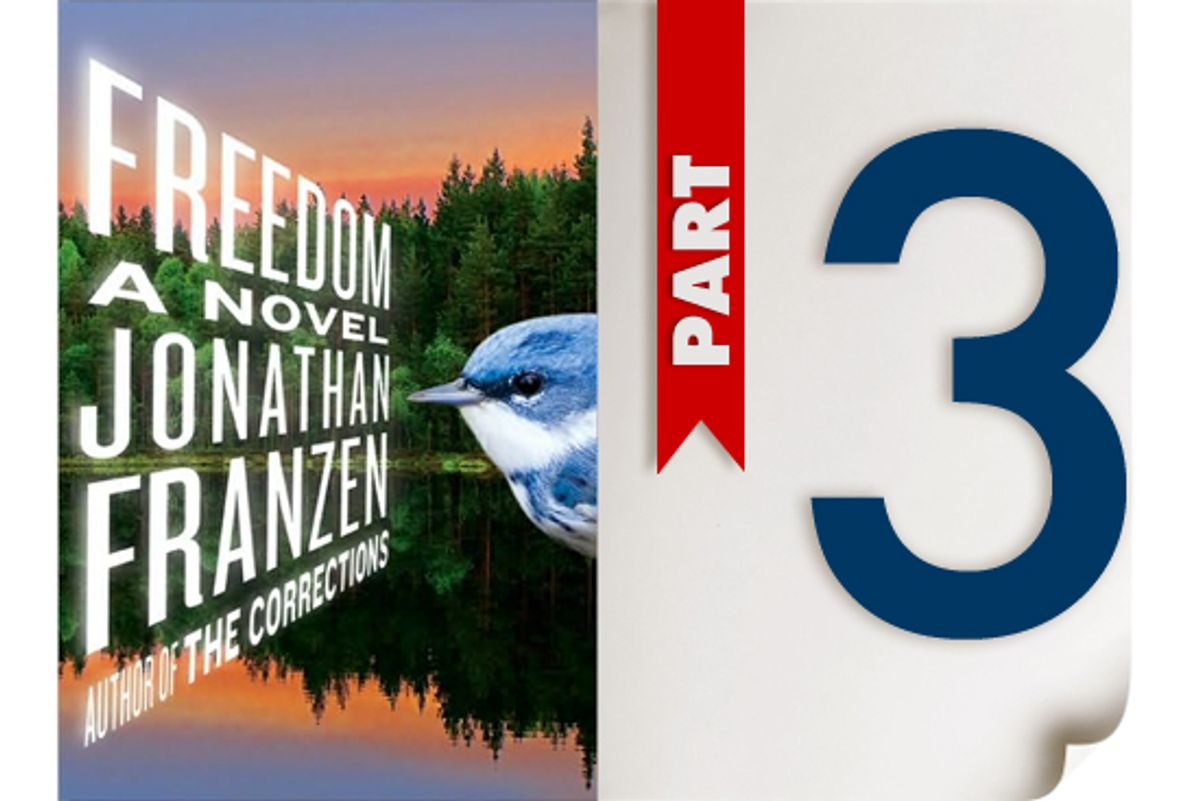 Welcome to the third and final session of the Salon Reading Club for Jonathan Franzen's novel "Freedom." Last week, we took the discussion up through Page 382, and now it's time to consider the book's conclusion. If you haven't finished yet and are spoiler phobic, read no further. (See the sidebar to the right for more information on the Salon Reading Club)

As always, I'll toss a few topics out in this introduction, but please feel free to take the conversation wherever you like in the comments. Now's your last chance to get in any questions you may have for Jonathan Franzen. He'll being answering them next week.

I'm a little ambivalent about the ending of "Freedom." While it was definitely satisfying to see Walter and Patty reunited, part of me thinks it's not very realistic. But perhaps that's the point; if those characters had done what most divorced couples do and kept moving on to new lives, they'd be exercising the American-style freedom about which Franzen is clearly so ambivalent. He doesn't really show us how they manage to patch things up, which I find a bit mysterious, but I assume that it has something to do with both of them (but especially Patty) wanting to make right what they'd gotten so terribly wrong. Walter got the chance to fall apart (formerly Patty's job) and Patty got to rescue him. (And poor Lalitha got a bird sanctuary named after her.)

What did you think of the way Franzen depicts the political climate of the mid-2000s? Walter's road trip with Lalitha to promote Free Space is a Magical Hysteria Tour of the endemic rage of the period, which Walter regards as "loony," even though it is, in a fashion, a reflection of the repressed anger he's been nursing since his boyhood in the motel. There's a strong sense that Americans have been making their politics carry an emotional load displaced from their personal lives -- it's a lot less destabilizing to rant on the Internet about Dick Cheney or Bill Clinton than to get into it with your spouse and parents, let alone your own messed-up self -- to the detriment of public life.

Among the many delightful touches that I savored in this last part of the book was the way Jessica keeps flinging the authority of her youth in Lalitha's face -- "Did Lalitha not understand anything about young people's new relationship with music?" -- although the age difference is, what, seven years? A much less sympathetic character in the very last chapter, Linda, deploys a not dissimilar rhetorical tic whenever she thinks she's losing the moral high ground in a conflict: She starts talking about her children, whom she clearly regards as a free pass for every selfish and vindictive thing she does. I'm sure some readers will call Linda a caricature, and I wish it were so. Alas, I have met people exactly like her.

In fact, the whole little neighborhood drama about the cats and the songbirds at the end deftly encapsulates the themes of the book: Walter is right, but in the wrong way. Linda is a monster, but taking her cat to the pound only makes him one, too. But, again, I'm not sure I'm optimistic enough to believe in Patty's solution -- even if I'd like to.