This week in crazy: Dinesh D'Souza

The conservative pens an outlandish Obama cover story for Forbes, and his book is so nutty even Glenn Beck approves 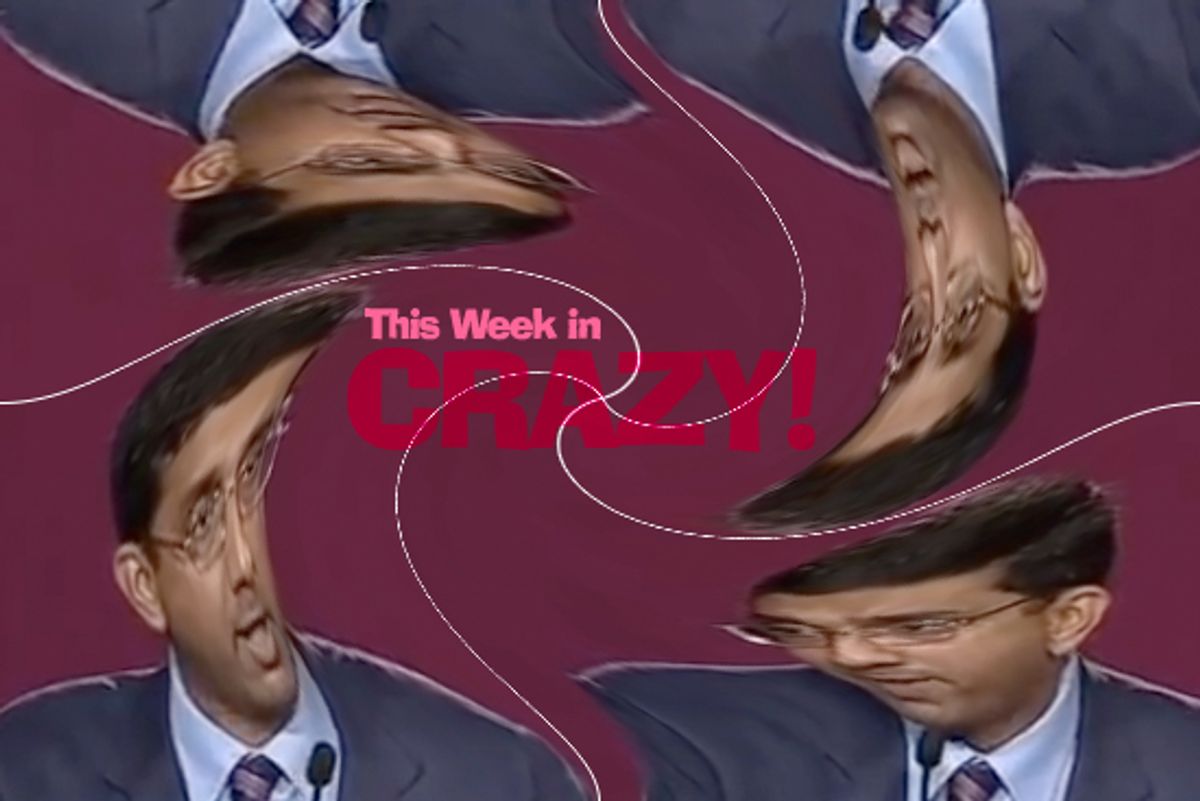 Half-wit third-generation Forbes magazine publisher Steve Forbes uses a healthy combination of inane lists and relentless flattery of millionaires to keep his grandfather's publication afloat in these shaky times. But the occasional Republican presidential candidate endangered his magazine's harmless reputation this week by putting a rather stunning essay on its cover this month arguing -- unconvincingly and with bad data and an incredibly obtuse reading of the president's memoir -- that Barack Obama is motivated by the "Kenyan anti-colonialism" of his father, whom he barely knew. The essay's author was Mr. Dinesh D'Souza, the pundit so desperate to provoke that not even conservatives take him seriously anymore.

D'Souza, longtime conservative pseudo-academic and current president of a 200-person evangelical Christian college, was born and spent his formative years abroad, which made him a super-Christian patriot, but made Obama an anti-American radical.

He is, of course, a product of the Young Republicans movement -- at Dartmouth he published the names of closeted gay students, for a laugh.

As Dave Weigel explains, D'Souza first blew up in 1995 with "The End of Racism," one of those horrible '90s books daring to be "politically incorrect" by outright lying about history.

Written to ride the wave of books and articles that called for white America to get over its racial guilt, it included lines like the "American slave was treated like property, which is to say, pretty well." It was so sloppy and unconvincing that it killed the genre for a few years; it's a 700-page doorstop by a one-time AEI scholar that no one cites today.

Then came "The Enemy at Home," a book that blames the left for 9/11 by pointing out that terrorists hate the same things that Christian right-wingers hate -- promiscuity, feminism, etc. This book was so confused and horrible that all of D'Souza's right-wing friends denounced it.

His newest, "The Roots of Obama's Rage," is the story of Dinesh D'Souza flailing to find a new and unique way of making a moderate pragmatic Democrat sound like a horrible monster bent on the destruction of America and enslavement of its people. He's recreating the nation in the image of his "philandering, inebriated African socialist" father. He is stealing America's wealth and redistributing it to third-world nations. Sources include, in addition to Obama's memoir about the absence of his father from his life, one obscure paper Obama Sr. wrote, and also something one of Obama's grandmothers said, once.

D'Souza's embarrassing history should've led this book straight to the remainder bin. Instead it made the cover of Forbes. Then Newt Gingrich endorsed it. Then Glenn Beck endorsed it. The book immediately climbed up the Amazon bestseller list.

Now the White House is involved, with Robert Gibbs asking Forbes to retract the numerous factual inaccuracies. All Forbes will say is that facts don't apply in opinion pieces.

D'Souza is enjoying all the attention, of course. He writes on his blog that he is not a birther, because he doesn't say Obama wasn't born in Hawaii. He doubles down on a stupid error about a loan to Brazil, proving that it was intentional malice and not stupidity. And he denies that race has anything to do with anything, while he sells his book insisting that the president can only be understood as a product of his black, Kenyan, African, drunk, polygamist, radical black father.

Yesterday I did Glenn Beck's radio show for an hour, and the book -- which will be out in a couple of weeks -- rocketed to the top 5 on the amazon bestseller list. There is a lot more to come. So why did the article previewing the book so enrage the White House and the Obamorons? Because it provides a belated but desperately-needed explanatory framework for Obama. Finally we have a key that actually opens the lock. No, Obama is not a Muslim. No, Obama is not a socialist. The truth is far worse.

The truth -- that no idiocy is too extreme to be taken seriously by the right-wing media establishment anymore -- is, indeed, far worse.

Republican Party This Week In Crazy