The perils of false equivalencies and self-proclaimed centrism 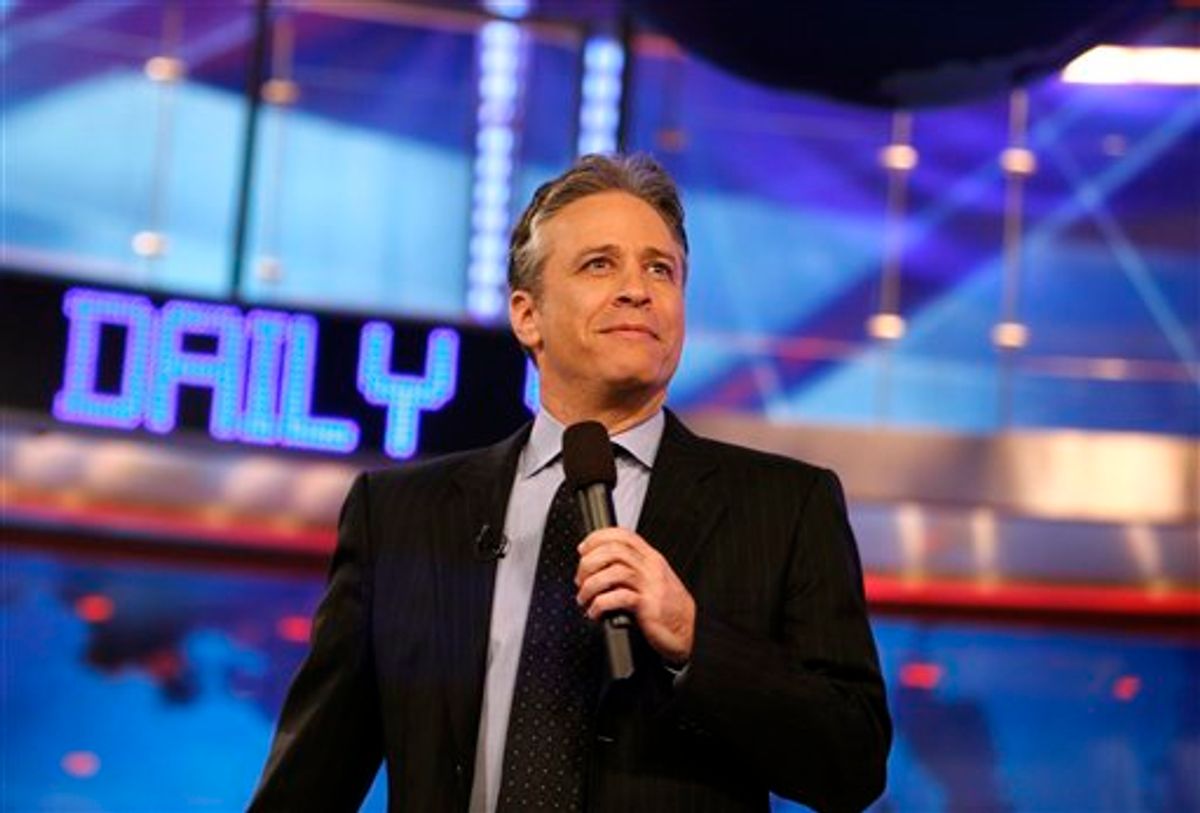 FILE - In this March 12, 2009 file photo, Jon Stewart is shown during a taping of Comedy Central's "The Daily Show with Jon Stewart" in New York. (AP Photo/Jason DeCrow, file) (AP)
--

Jon Stewart announced his much-awaited "big announcement" on Thursday's edition of his late-night program, "The Daily Show." He plans to stage a rally in Washington to counter what he identified as extremists on either side of the political spectrum. . . .

He later labeled it a "Million Moderate March." The purpose, he said, is to counter what he called a minority of 15 percent or 20 percent of the country that has dominated the national political discussion with extreme rhetoric. He tarred both parties with that charge, mentioning both the attacks on the right against President Obama for being everything from a socialist to un-American and on the left against former President Bush for being a war criminal.

The Army general who led the investigation into prisoner abuse at Iraq's Abu Ghraib prison accused the Bush administration Wednesday of committing "war crimes" and called for those responsible to be held to account.

"After years of disclosures by government investigations, media accounts and reports from human rights organizations, there is no longer any doubt as to whether the current administration has committed war crimes," Taguba wrote. "The only question that remains to be answered is whether those who ordered the use of torture will be held to account."

The central crime in this pattern of crimes, the kingpin which holds them all together, is the plot for aggressive wars. The chief reason for international cognizance of these crimes lies in this fact.

I think Jon Stewart is one of the most incisive and effective commentators in the country, and he reaches an audience that would otherwise be politically disengaged.  I don't have any objection if he really wants to hold a rally in favor of rhetorical moderation, and it's also fine if, as seems to be the case, he's eager to target rhetorical excesses on both the left and right in order to demonstrate his non-ideological centrism.  But the example he chose to prove that the left is guilty, too -- the proposition that Bush is a "war criminal" -- is an extremely poor one given that the General in charge of formally investigating detainee abuse (not exactly someone with a history of Leftist advocacy) has declared this to be the case, and core Nuremberg principles compel the same conclusion.

Leave aside the fact that, as Steve Benen correctly notes, Stewart's examples of right-wing rhetorical excesses (Obama is a socialist who wasn't born in the U.S. and hates America) are pervasive in the GOP, while his examples of left-wing excesses (Code Pink and 9/11 Truthers) have no currency (for better or worse) in the Democratic Party.  The claim that Bush is "a war criminal" has ample basis, and it's deeply irresponsible to try to declare this discussion off-limits, or lump it in with a whole slew of baseless right-wing accusatory rhetoric, in order to establish one's centrist bona fides.

It's admirable to want to apply the same standards to both sides, but straining to manufacture false equivalencies doesn't accomplish that; sometimes, honestly applying the same standards to each side will result in a finding that one side, at least in that regard, is actually worse.  When that's the case, a person engaged in truly independent, non-ideological inquiry -- rather than the pretense of such -- will expressly acknowledge the imbalance, not concoct an equivalency where it doesn't exist.  By stark contrast, Stephen Colbert's "March to Keep Fear Alive" seems extremely well-focused and on-point.

UPDATE:  Several people have questioned whether Stewart meant to include as one of his examples the claim that Bush is a "war criminal."  That's certainly how it was understood in many venues.  Aside from the NYT piece quoted above ("He tarred both parties with that charge, mentioning [] the attacks . . .  on the left against former President Bush for being a war criminal"), there's also this Politico piece, which includes a video of the segment ("On the right, Stewart rejected those who question Obama's citizenship and patriotism and, on the left, he knocked those who called President George W. Bush a war criminal").  It's possible that Stewart intended to criticize the means of expressing this idea more than the idea itself, but that's certainly not how it was understood in many places, including the NYT and Politico, and it's now how I understood it as well.  Perhaps he'll clarify, though I think, at best, this underscores the dangers of trying too hard to equate that which is not equal.

One other point about this fixation on the "tone" of our politics.  Political debates are inherently acrimonious -- much of the rhetoric during the time of the American Founding, as well as throughout the 19th Century, easily competes with, if not exceeds, what we have now in terms of noxiousness and extremity -- but far more important than tone, in my view, is content.  For instance, Bill Kristol, a repeated guest on The Daily Show, is invariably polite on television, yet uses his soft-spoken demeanor to propagate repellent, destructive ideas.  The same is true for war criminal John Yoo, who also appeared, with great politeness, on The Daily Show.  Moreover, some acts are so destructive and wrong that they merit extreme condemnation (such as Bush's war crimes).  I don't think anyone disputes that our discourse would benefit if it were more substantive and rational, but it's usually the ideas themselves -- not the tone used to express them -- that are the culprits.