Debating Iran on MSNBC with a perennial war supporter

Iranian President Mahmoud Ahmadinejad is in the U.S. this week to address the U.N. and, as usual, extremists in both the U.S. and Iran are exploiting the drama for their own purposes.  At his Townhall meeting today, President Obama said that a military attack on Iran "would not be the ideal solution" to the "serious problem" of Iran's nuclear program, but that he is not taking that option off the table.  I was on Dylan Ratigan's MSNBC show this afternoon, along with National Review's Cliff May, discussing various issues relating to Iran, and, particularly as the discussion became more contentious, it was, I thought, quite illuminating.  Whatever one thinks of Ratigan, there's no question that he has become increasingly radicalized by the pilfering and plundering from the financial crisis, and now offers views that are rarely, if ever, voiced by other television news hosts (the video can be watched below or here):

(1) There are two relatively new features in the right-hand column of this page.  One is a window that contains my most recent postings on Twitter, and the other is a "Donate" button, which I posted in response to numerous reader requests, to allow ongoing support for my work here (explained here).

(2) I'll be on Democracy Now tomorrow morning at 8:00 a.m EST (live video feed here).  Over the next couple days, I'll also be on Rachel Maddow's show (tomorrow night) and Morning Joe (on Wednesday morning), as well as a couple of other shows.  I'll post exact times on Twitter when I know them (that will be posted in that Twitter window, or you can follow the feed here).

(3) On Wednesday, at 6:00 p.m., I'll be at this event at Brooklyn Law School to discuss the flotilla incident.  The event is free to the public and includes a dinner with it, and I expect it will be a great event given the panel composition and the substantial Q-and-A session afterward, so anyone in the NYC area is encouraged to attend.

UPDATE:  It is true -- indisputably true -- that there is one country in this conflict which is regularly threatened with military attack.  From McClatchy today: 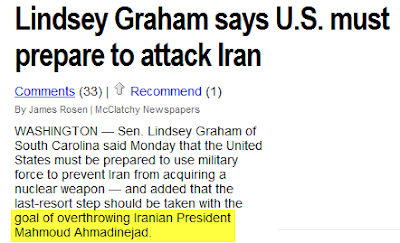 Graham added:  "If we engage in military operations as a last resort, the United States should have in mind the goal of changing the regime . . . not by invading (Iran), but by launching a military strike by air and sea."  Removing the Iranian Government with nothing but air and sea strikes would require such vast devastation to that country, killing so many Iranians, that its mere suggestion is monstrous.

Speaking of "crazy," monstrous people, The Guardian has a good report today -- with a particularly revealing final quote -- on the growing controversy at Harvard over giving an award to New Republic owner and editor Marty Peretz in light of his 20-year record of pure bigotry (and this commentary from Ta-Nehisi Coates is probably the best analysis I've read yet regarding the Peretz/TNR matter).

UPDATE II:  The 15-minute Democracy Now segment I did this morning is below, and it covers a range of topics, including Iran, the Tea Party, the Democratic strategy, and the President's assassination program.  Below that is the Democracy Now segment which preceded mine this morning, in which Pakistani-British historian Tariq Ali critiques U.S. actions in Pakistan, Afghanistan, and the rest of the region; it is truly an excellent discussion and I highly recommend watching it for those who have time.  The Ali segment begins at 11:30 on the video; just click on the timeline of the player to begin there.  Transcripts of both segments will be posted later today, here and here respectively: