This is just a preview of the GOP's Tea Party hell 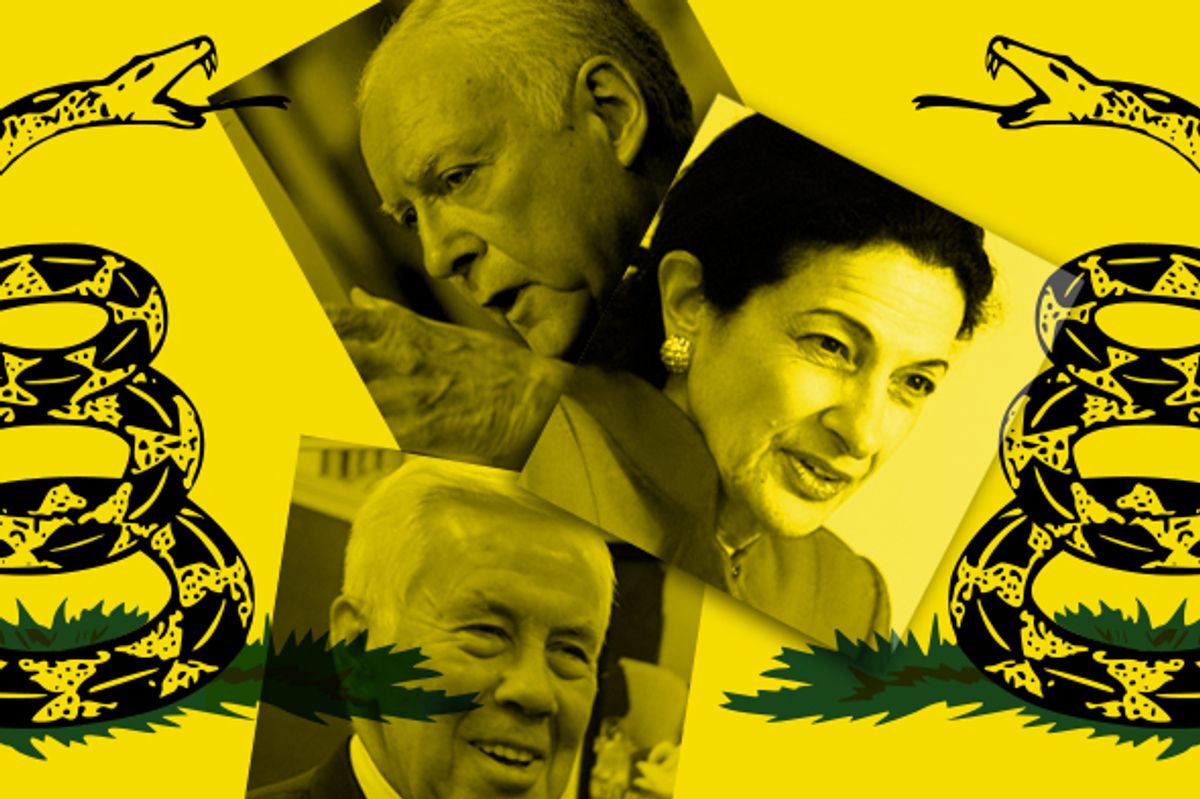 What's most striking about the trauma the Tea Party inflicted on the Republican establishment in the Senate primary season that ended last week is how much worse it could have been.

Sure, the Tea Party base managed to dethrone two sitting senators, Utah's Robert Bennett and Alaska's Lisa Murkowski, and to scare another senator, Arlen Specter, and a governor, Charlie Crist, out of the party. And it knocked off establishment favorites in a handful of key states, like Delaware and Colorado, while scaring the bejesus out of others, like New Hampshire's Kelly Ayotte (who survived her primary by 1,600 votes).

But when it came to this year's primaries, the Tea Party's momentum was late-starting. It wasn't until Aug. 24, when Joe Miller stunned Lisa Murkowski in an upset absolutely no one saw coming, that its potential became clear. As soon as the result came in, the Tea Party Express, which had quietly dumped $600,000 into Miller's effort, turned its focus to Delaware, another state that was on no one's radar. That support, along with the media's sudden interest, transformed right-wing gadfly Christine O'Donnell into a player, and three weeks later she was declaring victory over Mike Castle, a nine-term congressman and fixture in Delaware politics.

It made you wonder what would have happened if the Tea Party had waged this focused an effort earlier in the year. For instance, Rep. Mark Kirk, a moderate congressman from just north of Chicago, won the GOP Senate nomination in Illinois on Feb. 3. He beat his closest competitor by 37 points, but he only finished with 56 percent of the vote -- jarringly low when you consider the unanimous backing he received from state and national GOP leaders and his overwhelming financial and name-recognition advantages.

In hindsight, Kirk may have dodged a big bullet. The field was crowded, with multiple candidates claiming chunks and bits of Tea Party support. A clear challenger to Kirk never emerged, and the kind of national investment that the Tea Party Express made in Alaska and Delaware was missing. But what if Illinois' primary had been scheduled for Sept. 14 -- after Alaska? Kirk would have made an awfully ripe target for the emboldened Tea Party movement. The same probably goes for Roy Blunt, the ultra-establishment former House GOP whip who somehow escaped the Tea Party's notice in his Aug. 3 primary in Missouri.

As it is, though, the Tea Party is out of Republican targets for 2010. But 2012 is just around the corner, and the Tea Party may pick up right where it left off when the next round of Senate primaries convenes..

This, at least, is what history suggests. The last time there was this much upheaval within the GOP was in the late 1970s, in the wake of Ronald Reagan's challenge to President Gerald Ford in the 1976 primaries. While Reagan fell just inches short in that race, the writing was on the wall: The GOP's demographics were changing and the conservative wing that Reagan represented would soon dominate; Ford's win would be the Rockefeller crowd's last stand.

After '76, New Right activists set out to purge the remaining liberal Republicans from the party -- a task that only took on more urgency when liberal Republican senators provided critical votes for Jimmy Carter's Panama Canal treaty in 1977. To the right, this represented a blatant sellout of American sovereignty. In the 1978 midterms, the right organized several high-profile primary challenges. In New Jersey, they united behind a Reagan aide named Jeffrey Bell and took out an icon of liberal Republicanism, four-term Sen. Clifford Case. In Massachusetts, they rallied around a radio talk-show host and anti-busing crusader named Avi Nelson and nearly knocked off Sen. Ed Brooke, the only black Republican ever elected to the Senate. There was no collective name for the movement that did this, but in spirit and style, it was very much the Tea Party's precursor.

And the movement didn’t stop in '78 -- not with Reagan running again in 1980, and not with liberal Republicans still roaming the halls of Congress. Down went Sen. Jacob Javits, Herbert Lehman's literal and ideological Senate heir, in New York's '80 GOP primary, felled by a then-obscure Al D'Amato. Only after Reagan's election did the purge mentality cease.

If that model holds, the Tea Party will be just as thirsty for GOP blood in '12 as it is today -- still enraged by TARP votes the way the New Right was still infuriated by the Panama Canal treaty in '80.

Because only 10 GOP-held Senate seats will be up in '12 -- a consequence of the party's drubbing in 2006 and weak showing in 2000 -- only three incumbents seem at obvious risk of becoming the next Bennett or Murkowski: Olympia Snowe, Orrin Hatch and Richard Lugar.

Of the three, Snowe -- at least for now -- faces the most peril. A PPP poll last week found that 63 percent of Maine Republicans say they'd prefer a new, more conservative senator to Snowe in '12. Her approval rating among self-identified conservative Maine Republicans is just 26 percent. And in a head-to-head trial heat with Chandler Woodcock, the party's 2006 candidate for governor, she trails by 5 points, 38 to 33 percent.

Snowe's offenses are lifelong; she's the closest thing left to a Rockefeller Republican. So it's hard to imagine her undergoing some kind of magical ideological transformation in time for '12. That said, she could still conceivably save her seat, since the Maine electorate is unusually friendly to independent candidates. Her popularity remains strong and deep outside of the GOP base, so she could plausibly leave the party and wage a successful third-party bid.

Hatch is more conservative than Snowe -- far more conservative. But he also voted for the first TARP bill, back in the fall of 2008, and with 34 years of senatorial experience, he pretty much personifies the Washington wing of the Republican Party. Already, Rep. Jason Chaffetz, a House freshman with strong grass-roots appeal, has toyed with the idea of challenging Hatch for the GOP nomination. And as Bennett's example this year showed, ousting an incumbent in Utah can be easy: Without 40 percent of the vote at the party's right-wing-dominated states convention, candidates can't appear on the primary ballot. Bennett, another TARP supporter, failed to reach this threshold -- and there are signs that Hatch could have trouble clearing it, too.

Indiana's Lugar, at least on paper, is safer -- if only because the most obvious Tea Party-backed challenger, state Sen. Marlin Stutzman, is likely to win a House seat this fall and might now want to risk it after one term. Stutzman came out of nowhere to wage a credible bid for the GOP Senate nomination, finishing 10 points behind Dan Coats in the May primary -- a performance that led Red State to brand him a "rock star."

Still, Lugar has run afoul of the right with his TARP votes and his more recent support for Elena Kagan's Supreme Court nomination -- and he reeks of Washington insiderdom just as badly as Hatch. Who knows, maybe Stutzman will challenge him anyway? Or maybe it won't even take Stutzman to make Lugar sweat.

Snowe, Hatch and Lugar are just the most obvious targets. Bob Corker and Jon Kyl also cast "yes" votes on TARP, and all are up in '12. For various reasons, they seem less likely to attract the Tea Party's ire in a primary, but nothing is impossible. (The scandalized Jon Ensign, who also voted for TARP, will be up for reelection, but few believe he'll actually run.)

Some believe that a poor showing by some of this year's Tea Party candidates will give the GOP base pause about embracing more of them in 2012 Senate primaries. If O'Donnell and Sharron Angle lose, the thinking goes, a chastened GOP electorate will be more careful when it comes to balancing purity and electability.

But that thinking is flawed. Just remember: After he kicked Clifford Case to the curb in 1978, Jeffrey Bell lost by 10 points in the general election. But that didn’t slow the New Right down at all, just as a loss or two this fall won't slow the Tea Party. In other words, what we saw last Tuesday in Delaware was both an exclamation point on this year's primary season and a preview of what's to come two years from now.