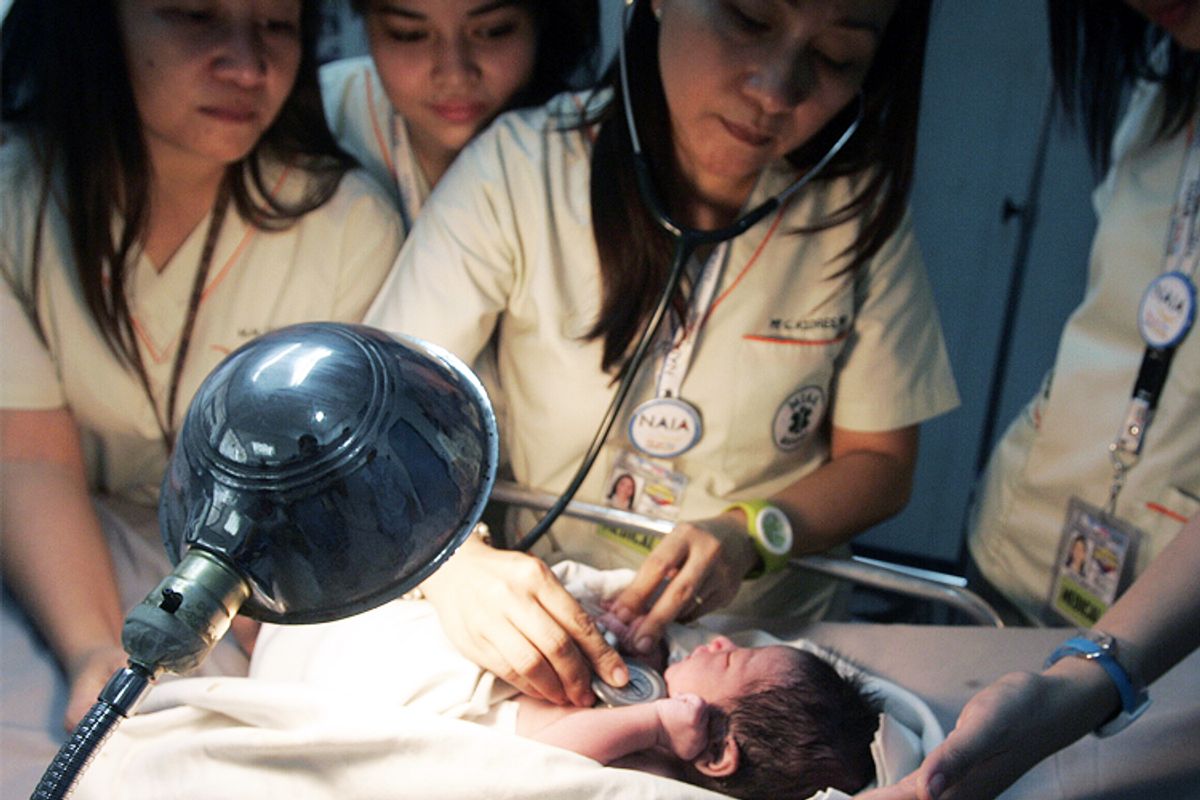 Nurses check the heartbeat of a newborn baby found inside the lavatory of an airplane at Manila's Ninoy Aquino International Airport.
--

"Souls on board" is a term familiar to pilots.

I always jot this number down before takeoff. Foreign controllers sometimes ask for it when crossing into their airspace.

The intent, should the worst occur, is to have a full and accurate count of a plane's occupants, including all crew members, infants, lap children and any other sentient entity perhaps not listed on the manifest. It's a sensible thing, even if it makes me uneasy. It's a number for the firemen. It's for the searchers and the rescuers and those who'll tally up the dead.

But it can. Every day, worldwide, between 3 million and 4 million people take to the air. Every so often one of them dies. This shouldn't really surprise us, considering the numbers. Passengers and even crew members have passed away while aloft.

But it can work the other way too. Maybe you saw this in the news, the story of George Francis?

He enters the world in a Gulf Air lavatory on a flight from Bahrain to Manila. His first moments on earth aren't on earth at all. They are somewhere above northeastern India. Above the Bay of Bengal, maybe, or at 35,000 feet overhead Rangoon. Nobody knows for sure.

He's wrapped in tissues and slipped into the trash.

Hours later, in Manila, an airport worker discovers him, struggling and blue, but alive.

The mother is a Filipina who'd been working as a domestic servant in Bahrain. There are tens of thousands of Philippine workers scattered around the Middle East. They work as maids, servants, laborers and so on. This mother is one of them. She says she was raped by her employer, and left the newborn to die out of fear that her family would be angry.

George Francis takes his name from the letters "GF," which is the two-character IATA code for Gulf Air, the national carrier of Bahrain.

There's little to like about this story, but I love that part.

It underscores, in a troubling but important way, the remarkable, even transformative power of commercial aviation. Some of life's most important events -- both good and bad, regenerative and calamitous -- can be found at one end or the other of a commercial airline flight. Or, in this case, in the very middle of it (George Francis will never see the airplane as most people do -- as as an inconvenient means to a more meaningful end). For some, flying helps to define who we are -- as professionals, as travelers, even as citizens. Young George Francis, citizen of nowhere. Citizen of everywhere. Citizen of the sky!