Can OK Go save the movie musical? 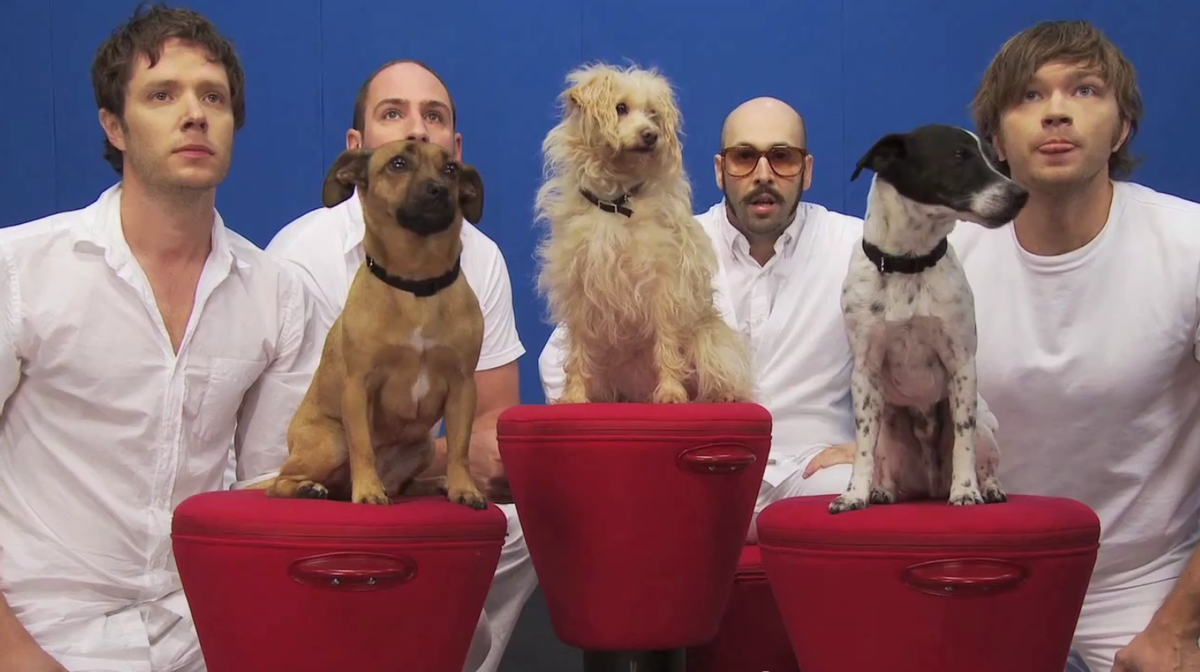 Every couple of years, the mercilessly catchy pop band OK Go comes up with another charming, low-tech video that makes pretty much any Hollywood musical made in the last 30 years look lame. Their latest, "White Knuckles," which pairs the musicians with an array of trained dogs, is another  classic of playful choreography, different from but equal to their other wonderful work. It starts like all their other videos: with the performers standing stock-still, waiting for the music to start. Then they dance. And that's all there is to it -- unless you count the elaborate stacking and unstacking of transparent wastebaskets and the impeccably timed entrances and exits of pooch after pooch, some climbing or jumping on the musicians, others leaping onto chairs and being wheeled through the shot, yet another bounding through a pile of wastebaskets and seeming to hurl itself right into the lens.

Like "Here it Goes Again," "A Million Ways," "End Love," "This Too Shall Pass" and other classics, this new video does more -- much more -- with less. Bandmembers Damian Kulash, Tim Nordwind, Dan Konokpka and Andy Ross aren't professional dancers and don't pretend to be. That's never been the appeal of these pieces, directed and choreographed by lead singer Kulash's sister Trish Sie (one of the videos, 2007's "Here it Goes Again," won the band a Grammy for best short-form video). They dance about as well as someone with a smidgen of rhythm might dance if he or she spent a couple of weeks rehearsing a routine with a professional choreographer and film crew -- and that, paradoxically, is a big part of what makes these videos so beguiling. Like Feist's justly celebrated "1234" and the low-budget musical "Once," they restore a sense of wonder to the musical number by letting the performers' humanity shine through and allowing them to do their thing with a minimum of filmmaking interference. This type of musical number respects the sanctity of time and space. It shows the performers' bodies from head to toe and allows them to do their thing in real time, without cuts.

It seems like a simple enough concept, and for the first few decades of the musical's existence, it was embraced and practiced as a matter of course.  When Fred Astaire and Ginger Rogers danced in 1935's "Roberta" or other films of the pre-TV period, we saw most or all of their bodies, and the filmmaker went a long time without cutting, deducing (correctly) that too many cuts would shatter the spell the performers were weaving, and might imply that there was some sort of cheating going on. For about 30 years now, the default mode has been to obliterate any sense of spatial relationships by focusing on hands, feet and faces and to never hold a shot longer than a couple of seconds for fear of boring the viewer. It's all cut-cut-cut now, even in films and TV series that star highly trained professional performers (for example, "Dreamgirls," "Nine," and "Glee").  If the filmmakers aren't pulverizing vocals and dancing into a whirl of fragments, they're using musical performance as glue for an expository montage, cutting restlessly from a performer singing a song about loss to, say, a lover packing his or her bags, or their old childhood home being torn down, or whatever -- as if a good song and a good performance need to be helped along.  They don't. Really.

The latter is OK Go's specialty. It's a testament to the power of simplicity that modest performers like these can generate ten times the excitement of a typical Hollywood production number, with its aerobicized backup dancers, strobe-flash cutting and swooping camera moves. Even though you can clearly see the bandmates fretting as the video unfolds -- worrying that they won't hit this or that mark, or that the dog will run in the wrong direction -- their eager-to-please concentration is entertaining because it's all bound up in their determination to give viewers a pure performance, unmediated by filmmaking voodoo. What they're doing is more pure, and thus more enjoyable, than the norm.  Purity trumps a fat budget any day.

As Cinematical's Christopher Campbell, another OK Go booster, wrote, "OK Go has already made their film debut as the wedding band in 'I Love You, Man,' so they're clearly not against being on the big screen. Other filmmakers I can see them working with include the Rube Goldberg-inspired directors Jean-Pierre Jeunet, Tim Burton and Nick Park, who could maybe do an animated OK Go movie -- the band's own 'Yellow Submarine'?"

Somebody should start a petition.