Have Stephen Colbert and Jon Stewart crossed the line?

The comedians' upcoming rallies will mock Glenn Beck's histrionics. But are they becoming too shrill themselves? 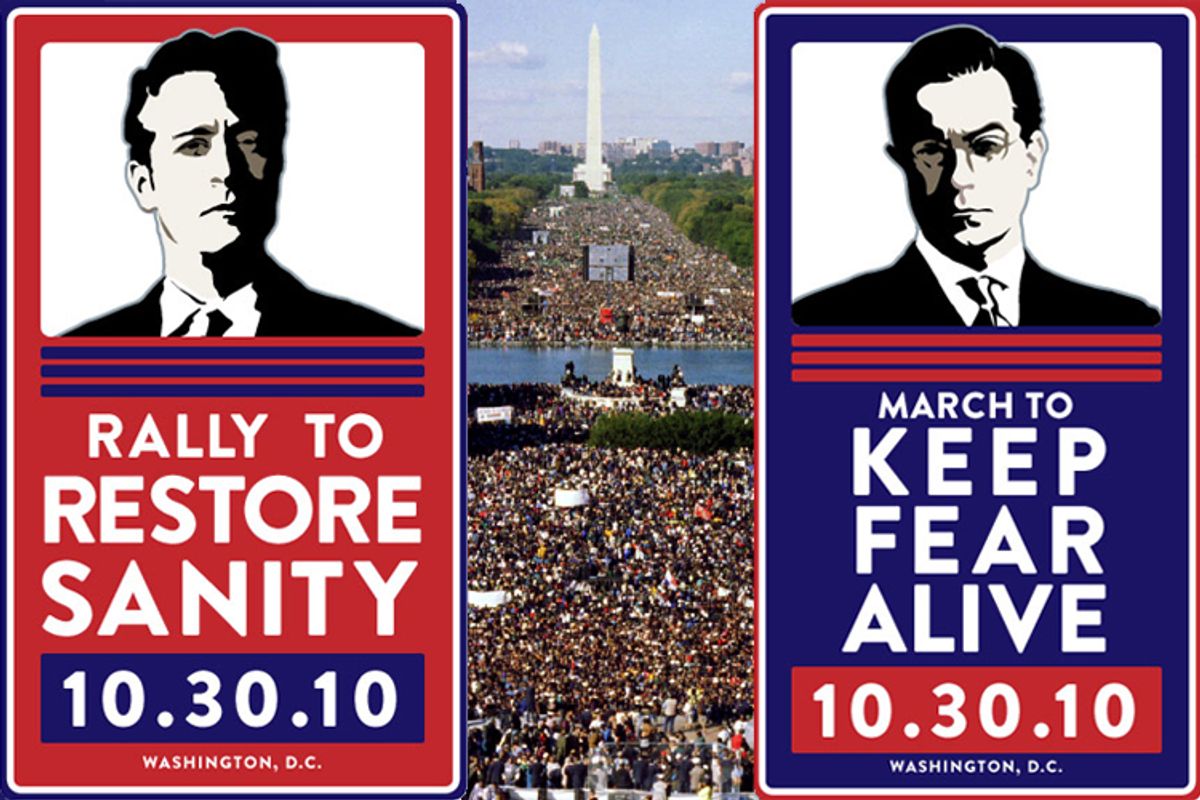 It started, as everything else in 2010 has, with a Web campaign.

In the wake of Glenn Beck's "Restoring Honor" at the Washington Monument last month ("honor" being a version of reality that existed on television shows in the 1950s) the flabbergasted, considerably less honor-driven denizens of social media mounted their own campaign to coax Stephen Colbert into whipping up his own rally to "restore truthiness." And in the blink of Betty White's eye, what the people demanded, first via Reddit and then on the inevitable Facebook page, became what the people got.

On Thursday, not only did everyone's favorite faux conservative Colbert indeed announce a "March to Keep Fear Alive," but everyone's favorite faux news anchor Jon Stewart unveiled his dueling "Rally to Restore Sanity" for Oct. 30. As a source involved in coordinating the events told Politico Monday, "Glenn Beck makes a big deal out of how, 'whatever you believe, all these people are really passionate about the issues, and look at this amazing turnout.' We’re going to show you how ridiculous Glenn Beck is because we’re going to put two comics up there and they’re going to have more people." Yay! Our side gets its very own hollow gesture, too!

There's something undeniably frustrating about watching a bunch of yahoos bluster around acting like they own what is ostensibly also our country. Hey, wackypacks, we abortion-loving immigrant homosexual non-Christians are America too. Yet the joke must be a little too clever for my eyes when the Rally to Restore Sanity is described as the one "for the people who think shouting is annoying, counterproductive, and terrible for your throat; who feel that the loudest voices shouldn't be the only ones that get heard." And we shall do that by ... having a rally.

Remember how you and your buds ironically started calling each other "dude" freshman year? And now it's many years later and you still do? At a certain point even sarcasm jumps the shark. Oh no, you politely rebut. See, we're doing it to be funny. Plus we're right and they're wrong.

It's just that it's tough to tread in the muck of parody and not wind up bearing an uncanny resemblance to the things we despise. Colbert has managed to do a brilliant job of it for years now, playing the part of platitude-spouting clueless patriot to hilarious effect. But how much difference is there anymore between a Glenn Beck pompously telling an audience of acolytes exactly what it wants to hear, and Jon Stewart doing it? How much self-congratulation about how much better our side is than their side can there be to go around? And I'm saying this as someone who views "The Daily Show" and "Colbert Report" as light in the darkness of insanity, who would eat a bowl of broken glass just to touch the hem of Stewart or Colbert's pants.

When their fans watch and listen to the Glenn Becks of the world and bring their fervor to the Capitol, it looks scary as hell to many of us, because those honor-restoring lunatics have the eye of the tiger. They campaign and they vote. They want to get stuff done. On a very deep and dispiriting level, it feels like we just want to be entertained.

Ultimately, what's the real use of drumming up a lot of people for the greatest rodeo clown routine in America history? For many of us this journey to D.C. is an opportunity to stand together united against idiocy sounds like both a great day out and a show of strength, but that doesn't mean it's not a Comedy Central-fueled ego trip as well. There may be a degree of smug, do-you-people-see-how-ridiculous-you-appear? satisfaction to be had, but after we stop patting ourselves on the backs, then what? When do we stop snarking and start doing? If Colbert and Stewart's comedic gesture manages to get some butts off the couch, off the couch they must stay.

And if we want to out-Beck the Beck zanies, to beat them at their own game, we can't just emulate their absurdity. Three days after the rallies are over and the yuks have died down, on Election Day, we can go to the polls and channel their motivated, organized outrage.