Why no amount of stimulus money will be enough

Consumers are 70 percent of the economy, and they're in no rush to spend 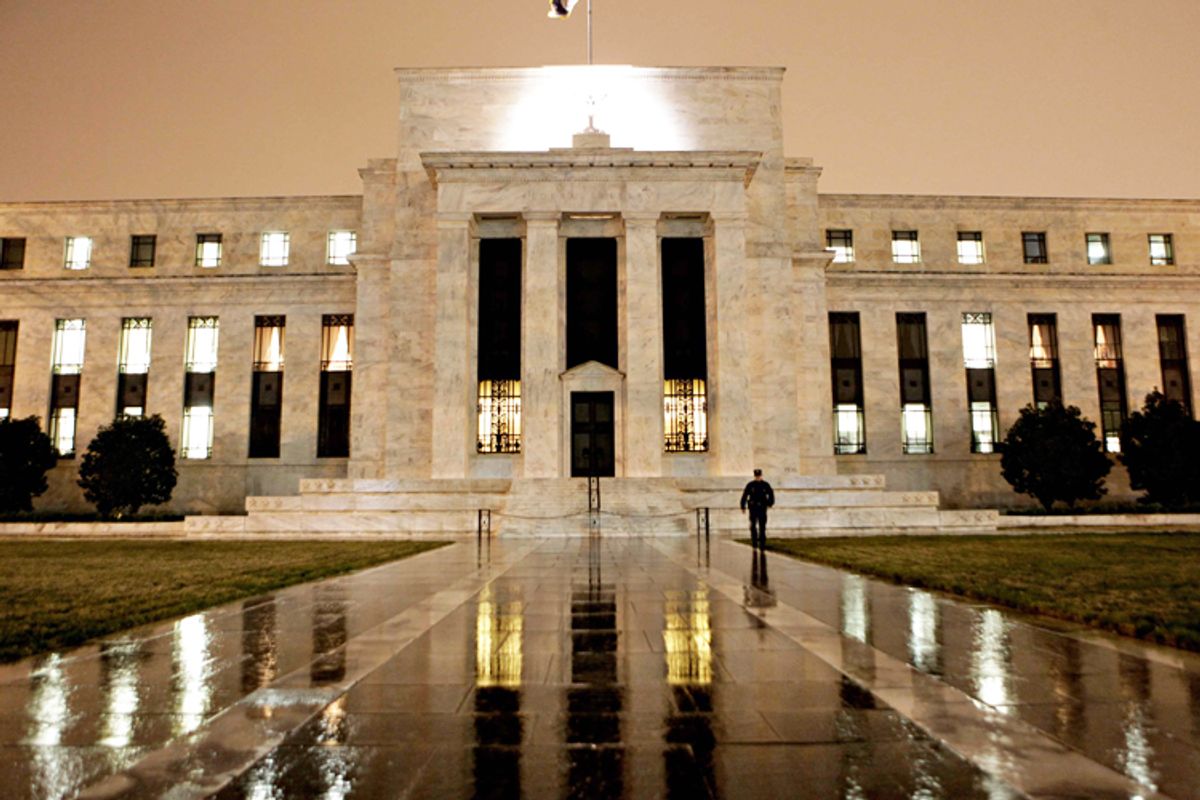 The Fed’s decision today (Tuesday) to keep short-term interest rates near zero is no surprise. What’s odd is its apparent decision not to boost the economy by buying hundreds of billions of bonds -- despite its acknowledgment that "the pace of recovery in output and employment has slowed in recent months," and that prices are rising too slowly for comfort (i.e., we might be facing deflation).

Every indicator suggests third-quarter growth will be as slow if not slower than in the second quarter. Consumer confidence is down. Retail sales are down. Housing sales are down. Commercial real estate is in trouble.

A growth rate of 1.6 percent means even higher unemployment ahead. Maybe we’re not in a double-dip but we might as well be in one. Growth this slow is the equivalent of heading downward relative to the growth needed to get us out of the hole we’re in.

The Fed is deadlocked because it harbors hawks who worry near-zero interest rates will lead to another round of speculation, ending in an even bigger bust. Kansas City Fed president Thomas Hoenig, for example, is openly dissenting from the Fed’s near-zero policy and I’m sure he resists doing anything more to stimulate borrowing.

I don’t generally side with the hawks but they have a point.

Even if the economy is heading downward, flooding it with more money may not help.

The problem isn’t the cost of capital. Most businesses can get all the money they need. Big ones are still sitting on $1.8 trillion in cash.

The problem is consumers, who are 70 percent of the economy. They can’t and won’t buy. Most don’t qualify for more credit given how much they already owe (or have already defaulted on).

Without consumers, businesses have no reason to borrow more. Except to speculate by buying back their own stock and doing mergers and acquisitions, which is exactly what they’re doing.

Ultimately, even if fiscal and monetary policy weren’t deadlocked, we’d still face the same conundrum. Say the White House and Ben Bernanke got everything they wanted to boost the economy. At some point these boosts would have to end and the economy would have to be able to run on its own.

But it can’t run on its own because consumers have reached the end of their ropes.

After three decades of flat wages during which almost all the gains of growth have gone to the very top, the middle class no longer has the buying power to keep the economy going. It can’t send more spouses into paid work, can’t work more hours, can’t borrow any more. All the coping mechanisms are exhausted.

Anyone who thinks China will get us out of this fix and make up for the shortfall in demand is blind to reality.

So what’s the answer? Reorganizing the economy to make sure the vast middle class has a larger share of its benefits. Remaking the basic bargain linking pay to productivity.

Let me end with a brief commercial. My new book, "Aftershock: The Next Economy and America’s Future," is out today. In it, I explain this in detail.