Hyper-produced ads from three candidates in Florida ... and a gloriously authentic YouTube sensation from DC 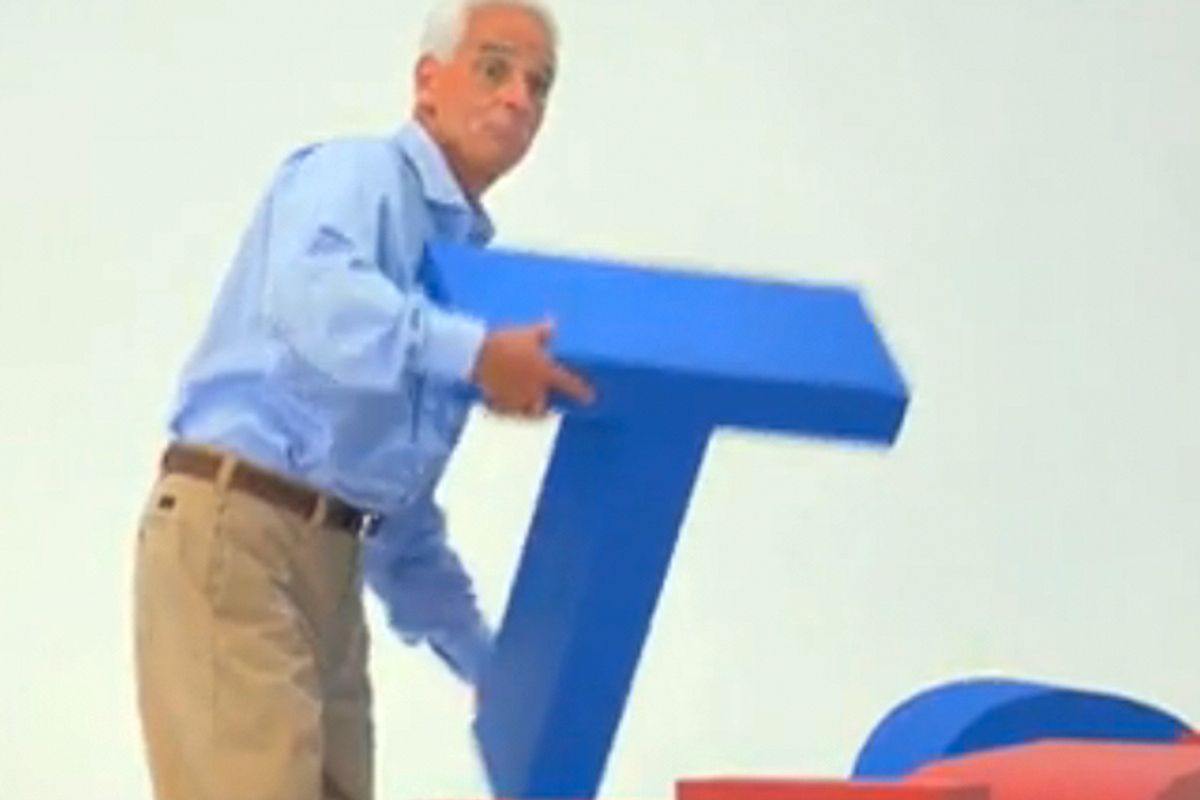 Hey, what’s Gov. Charlie Crist of Florida, who’s running as an independent for senator, doing in a Claritin ad? No, wait a minute, it’s a campaign commercial that just looks like some bad idea churned out by Big Pharma.

In this epically flawed political commercial, Charlie appears on a white background -- what ad folks call "no seam" - with giant letters spelling "Democrats and Republicans" fanning out on each side of him. He promises to put partisanship behind us, and that he will combine "the best ideas of Democrats and Republicans." To make the point, Charlie allows himself to participate in a goofy, and perhaps career-ending gimmick: He rearranges the letters to spell "America." Just like an allergy-relief commercial, where a faux-sincere pitchman merges "No Sneezing" and "No Drowsiness." Check out the ad here (commentary continues below):

And watch the spot carefully. As Crist moves the letters around -- and tosses some away -- he’s not talking on-camera; it’s his voice-over that we hear, a subtle but giant communication mistake that makes him an actor in his own commercial.

It’s a classic example of a poll-driven disaster. Crist’s media mavens had their heads buried in spreadsheets. Yes, I’m sure the “data” shows that people say they want good ideas no matter where they come from. But in this year of anger and confusion, Independents don’t want test-tube fusion, a polite hybrid of Democrats and Republicans. They don’t want a GMO candidate. They want someone strong and gutsy: his own man, not a man who belongs to two parties. That’s twice as bad as one.

And Crist comes across as boring and unconvincing; in his open-neck blue shirt and khakis, he looks like a third-rate CEO at an “ideation session.” No wonder he’s been stuck at 30 percent in the polls since late August.

This new Crist spot is equally disastrous. Call it the dumb metaphor school of advertising.

Perhaps inspired by the final season of “Lost,” Crist walks along a beach holding a stick, which he uses to draw a line in the sand. Why? Because, you guessed it, the “party bosses” in Washington refuse to compromise.

To make the point, Crist reels off good Democratic ideas, “like investing in clean energy.” Then he steps across the line to endorse good Republican ideas, like “Cutting waste so we can hold down taxes.”

Crist is squandering this election. Rather than inspiring people to join his Independent crusade, he’s running as a strange and unappealing kind of political hermaphrodite.

Marco Rubio, the Republican nominee, was speaker of the Florida House of Representatives from 2007 through 2008. He has been gradually distancing himself from the Tea Party’s insurrectionary vocabulary -- he didn’t even mention them in his victory speech -- and this innocuous, family-draped spot has none of its clarion intensity. It’s a reassuring confidence-builder that won’t send moderates scurrying.

The spot ends with one of the best closers I’ve seen recently. It’s a canny conflation of anti-Castro sentiment, embrace of immigrants, and a whiff of Tea Party rhetoric: After ticking off the threats to America -- and the risks that his children will be part of the first American generation to “inherit a diminished future” -- Rubio looks into the camera and says, “As the son of exiles, I know what it means to lose your country.”

“I’m Kendrick Meek, the Democrat for Senate, and with three of us running, you should know what makes me different.”

That’s how Meek begins his newest commercial, and it’s easy to see why he’s stuck hard in third. Can there be a worse media strategy than to display your utter lack of confidence by kicking off your spot with an implicit admission nobody knows what you stand for?

The spot follows Meek around the state as he declaims the positions that separate him from his opponents. He argues that he’s the only one who fought against developers draining the Everglades, the only one who’s pro-choice, who’s against offshore drilling and higher credit card fees.

But the high-energy cinematic style of the spot, which someone obviously thought was cool and modern, works against Meek. It’s jumpy. It forces Meek to behave like an actor and read from a script. It gives us no chance to get to know him, to like him, to believe him.

Obviously political consultants are still in thrall to the famous Paul Wellstone spot from 1990; the one where he says he has no money and has to talk fast.

But unlike Meek’s expensive production, this one feels gloriously cheap and real; Wellstone’s authenticity and utter lack of polish come flying through.

For a candidate in a much smaller race, who uses the handmade, quick-cut, garage-edited technique to great effect, check out this video from Bryan Weaver, who’s running for a council position in D.C. (Bryan credits the Wellstone legend, but not by name, saying that, because he lacks the vast resources of his opponent, he’s going to “Steal an idea and speak fast.”)

It was a YouTube phenomenon, as is his second video below.

There’s always a risk when a candidate attempts to crack the familiar mold of most political advertising. In that familiarity lies comfort, and in that comfort lies electability. But at the same time, voters today are both media-savvy and emotionally frustrated, to an unprecedented degree. Imaginative self-presentation is subliminally linked to imaginative solutions, and I believe there’s an opportunity for candidates to use their messaging in a way that promises both.