William Shatner: As great as he is awful

The new Twitter feed-inspired TV show "$#*! My Dad Says" is truly terrible. But its star remains a blast 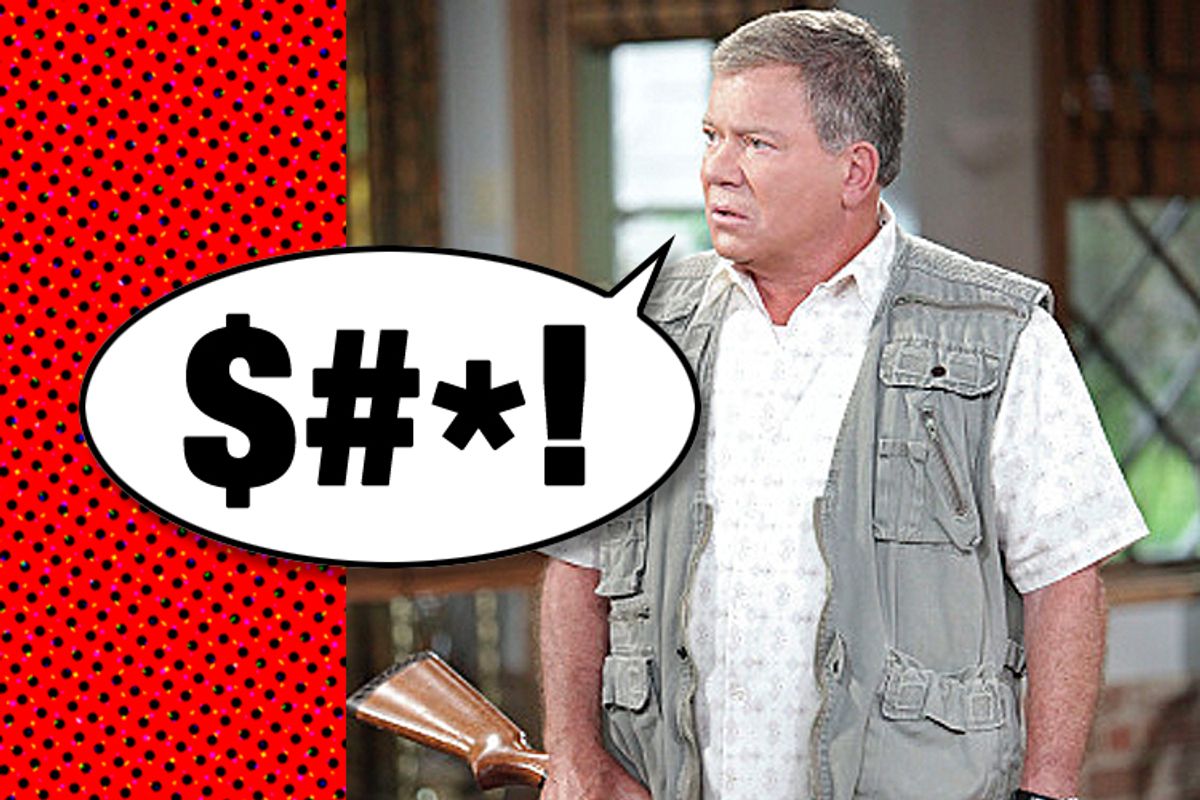 "Why can't someone do a good impression of me?" William Shatner moans on the series  premiere of the "based on the Twitter sensation" sitcom "$#*! My Dad Says." His fictional son has just delivered a halting, unmistakably Captain Kirk-like "Stay! With! Me!" and T. J. Hooker is not amused. You can't blame the kid for trying, though.

William Shatner, the 79-year-old former Starfleet admiral, former partner at Crane, Poole & Schmidt, the Priceline.com spokesloon and lead singer of world's greatest Pulp cover band, has one of the most enduring, enviable careers in the entertainment industry. He has won two Emmys and a Golden Globe. Pretty sweet for a guy who, when roasted on Comedy Central a few years back, was presented with a paper bag and challenged to act his way out of it.

Perhaps no other performer -- and certainly not one who's never graced the cover of Maxim -- has parlayed so much success out of such limited range. Not even David Hasselhoff himself, who wears self-parody well but has struggled with personal demons and found slim pickings for roles that don't require a red bathing suit, can't touch Shatner. Why? Because Shatner isn't merely lacking in the dramatic chops department; he's utterly bankrupt when it comes to pride. And a man that deeply in touch with his own terribleness is a man you've got to love.

Perhaps it was inevitable that the cast of one of the greatest, campiest franchises in history would have a sense of humor about itself. George Takei  has found unlikely fame as a fixture on Howard Stern's show. Leonard Nimoy signs his tweets "LLAP"  and runs his own Etsy boutique. These guys are a hoot -- none of which, by the way, had stood in the way of their accomplishments as activists and artists. The beauty of being a "Star Trek" survivor is that you can be a beloved, down-to-earth figure and an utter kook. You can be whatever you want, because you were on the Enterprise. And if you actually helmed the thing, the world is yours.

Shatner has graciously worn our collective goodwill toward him for over four decades now, giving us exactly what we want from him: unbridled, unembarrassed entertainment. He has not shied away from his alien-wrestling past nor has he rested on his Roddenberries. He hasn't exactly grown as an actor, but he has evolved as a performer, recognizing that everything most overblown and ridiculous in James Tiberius Kirk is everything most charming in William Shatner himself. Somewhere in his hamminess, there's a bit of the best side of human nature: that part inside us that can laugh at ourselves more than we laugh at others, that can let someone else shine in contrast to our own silliness. Who do we want to give us beatnik readings from Sarah Palin's memoir?  Who can make Gene Simmons cry? Who else would call his album "Has Been"?

So it's unfortunate if not surprising that Shatner's much-overhauled, badly buzzed about "$#*! My Dad Says" is awful, and not in a so-awful-it's-genius way, like Shatner doing "Rocketman"  is. As the shocking, sound-bite-dispensing dad, Shatner blusters around, making lame jokes that mostly seem to involve testicles. The punchlines are forced, the cast looks mortified, and worst of all, there's a fair amount of huggy feely touchy growy father-son stuff thrown in to make your flesh crawl right off your bones. Yet Shatner himself looks pleased as punch throughout, like the check just cleared and he's delighted to be hurling abuse at the rest of his fictional family.

It's all considerably less fun -- and agonizingly longer -- than a Priceline spot, but when Shatner growls, "The cot! Is in! The attic!" it's hard to suppress a smile. It's classic Bill being disarmingly Bill. And maybe the reason no one can do a good impression of him is because no one else in this or any other world can deliver a joke with the crazy, lovable bombast that Shatner can. Because no one else seems to enjoy more that it's on him.