Lewis Lapham on "the end of capitalism" 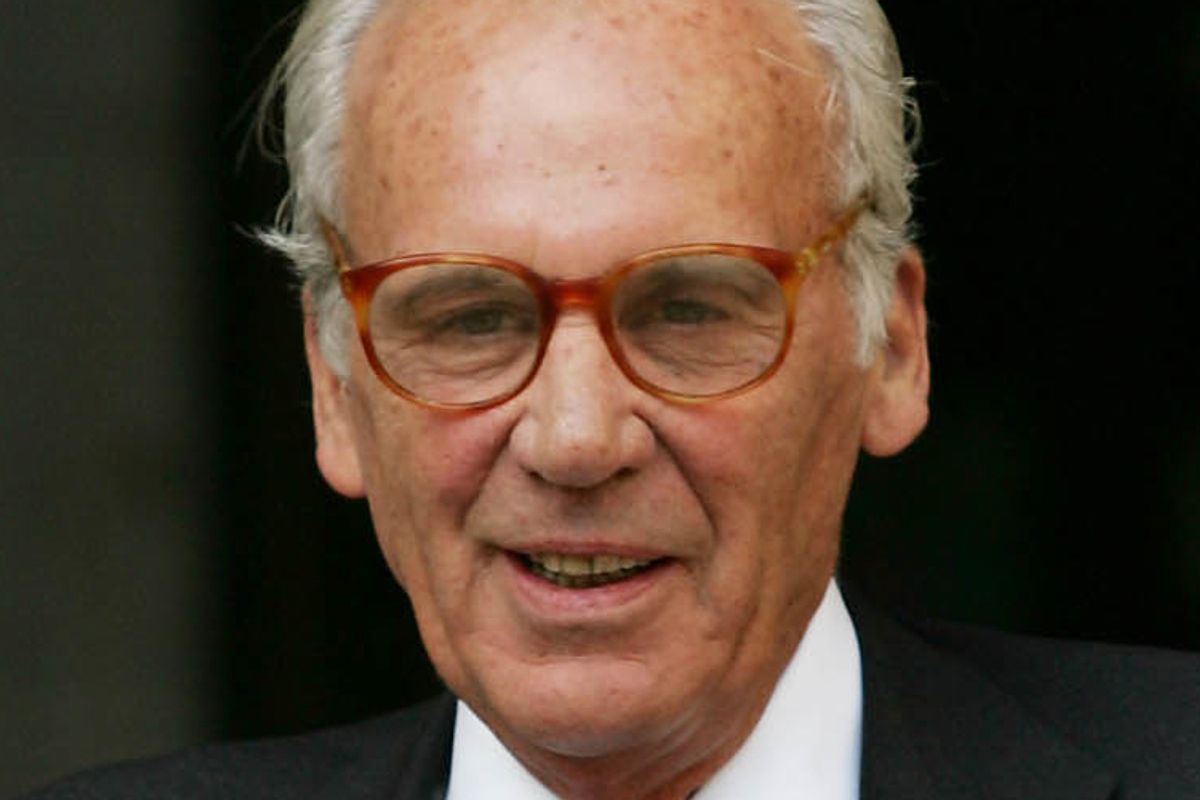 This is the second installment of "The Influencers," a six-part interview series that Lynn Parramore, the editor of New Deal 2.0 and a media fellow at the Roosevelt Institute, is conducting for Salon. She talked to Lewis Lapham, the former longtime editor of Harper’s and the founder of Lapham’s Quarterly, about the nature of American-style capitalism — its beginning, its historical manifestation and, possibly, its end.

Historically, what do you see as the dominant characteristics of America?

It’s faith in the spirit and mechanics and moral value of capitalism. It is a country of expectant millionaires. You have the notions of risk, of labor put to a productive use, deferred pleasure — ideas that come out of our Puritan ancestry. And Puritans, by the way, were also venture capitalists. The plantation in Plymouth, and then in Massachusetts Bay, was intended to bring money to its investors in London.

Capitalism is the promise — it’s the bet on the future. It’s the hope of a new beginning over the next ridge of mountains, around the next bend in the river. It gives the common man a chance. That’s in the Declaration of Independence: life, liberty and the pursuit of happiness. The original wording was: life, liberty and property. But happiness and property were almost synonymous in the Calvinist mind!

Capitalism, as you mention, is future-oriented. Do you think it relies on historical amnesia?

Well, there’s a new book called "Relentless Revolution: A History of Capitalism," by the eminent historian Joyce Appleby. And her argument — and I think it’s probably true — is that capitalism is an historical phenomenon. It’s not a given. It’s not human nature. It arises at the end of the 16th century in Holland, but then is developed over the next four centuries for the most part in England and America. It’s had a life span of four centuries.

Prior to, let’s say, the 16th century, you had warrior kings who disdained commerce. Commerce existed from the very beginning — you have trading going on in Islam, in the Indian Ocean, in China … this goes back thousands of years. But the hope of the government is stability, hierarchy, order, degree. People knew the stations to which they belonged, to which they were born. Until 1600, 80 percent of the people in England lived on farms, and there was no question of improving their stature. There was no place for their surplus labor to go until you begin to develop commercial venture, trade and so on.

But 18th- and 19th-century European imperialism is a dynamic of private enterprise rather than state enterprise. The Roman legions are in the service of the Roman so-called Republic, or Empire. But the East India Company is acting on behalf of its principal owners and stockholders and, to a certain extent, of the sailors. It’s evolving toward our present sense of venture capital. The capitalist idea is to turn loot to a productive purpose — to yoke it to the wheels of industry. And this, of course, comes along, during the four centuries [17th century to present] with a steeply rising curve of scientific discovery and technological advance, so you get to the steam engine, the railroad, the iron smelter, the telephone, the radio, the TV, the Internet. We shape our tools, and our tools shape us. And by that shaping us, they shape our attitudes, our moral sense, our sense of self-interest. Competition is the spirit elixir of capitalism. This is not true in the more traditional society where the emphasis is on community, hierarchy, order, where people are terrified of starvation.

Do you think history makes us uncomfortable because it diminishes our sense of our own individual importance? Or the potency of our individual will?

I think the opposite. I think history is comforting because it reminds us that our situation, our circumstance, is not new. Other people have experienced far worse sets of circumstance than we confront at the moment. The world has, for all intents and purposes, come to an end many, many times. But people carry on.

People are always terrified of change. The idea was to try to keep everything just the way it was … not to let the strings become untuned. Capitalism untunes all the strings. Capitalism is, as Appleby says, a relentless revolution. Joseph Schumpeter, the columnist, in 1942 defined capitalism as creative annihilation — it wipes out entire industries. There’s always a momentum for something new. A new way of doing something, a new way of making something. Again the tools shaping and reshaping us, which is what’s happening today with communications, with the Internet.

So the American temperament —the capitalist temperament — is suited to that kind of change. Capitalism is based on friction, movement — the notion that every 20 years the matinee idols will be changed and the leadership will be removed and replaced, and that is the way it works. That, of course, when it begins to come into the world in the 17th century, is truly terrifying to people. This is largely the story of the English Civil War. ‘Behead the king’ — that would have been unthinkable a hundred years before. But suddenly even divine right can be challenged. Constant questions. Constant new inventions. Improvements in navigation, machinery, chemical compounds and so on. And the characteristics — I keep getting back to your original question — the American temperament is made in that mold. For good or for ill. There’s a very dark side to this.

Would you say that a chronic dissatisfaction is part of that dark side?

It’s the impertinent dynamism of ‘more’. It is a voracious, devouring appetite for more. And if we’re not careful, unless we get control of it, it will devour the earth. Capitalism had a particularly fertile soil in America because there was so much land available. People could just go west. Take land from the Indians by force. The same thing in Mexico. Call it Manifest Destiny, but it essentially was the seizure of property. There was an abundance of resources. Every man can become king for the day or make the Forbes 500. And it’s the individual as opposed to the community.

Do you think it’s any accident that an emphasis on romantic love has grown up alongside capitalism?

[Laughs.] Oh, wow. Yeah, the idea of the perfection of humankind … to expect that romance and marriage and sensuous pleasure and good monetary terms can all be encompassed within marriage is an improbable proposition. But it’s related to the romantic movement, which again is part of capitalism, which is within the 400 years of the capitalist emporium, and that goes along with the idea of sublime self-improvement and true love waiting with a rainbow just over the next hill at Aspen…

You’ve spoken of using history as a weapon. How is it a weapon and against what forces would you like to deploy it?

Well, you deploy it against the dealers in fascist politics and quack religion. You deploy it against people promising miracles. It teaches you to rely on the blessings of experience, which is the great teacher, I think, as opposed to abstract outcome.

Is Lapham’s Quarterly part of the arsenal?

Yes, Lapham’s Quarterly is a small part of the arsenal. It simply means to foster an acquaintance with, and an interest in, the historical turn of mind. Not to know Cicero, not to know what happened before one was born is always to be a child … to put yourself at the mercy of charlatans whether dealing in real estate or world conquest. It’s gives you a sense that what your own story is — where you come from.

I spend a lot of time reading into the history of Elizabethan England in the first half of the 17th century, both in Europe and in America, and I can see where my politics are coming from. I can see my own fear of modernity — and by that I mean the devouring appetite of capitalist overturning — nothing lasts, everything is made to be obsolete. Everything is made to become a disposable, profit-bearing product.

The older hierarchal vision rendered beautifully in Shakespeare’s plays and in Sir Philip Sidney’s "Arcadia" — that political argument was lost in the Civil War in 1640. So I can see that my own politics are about 350 years out of date. But on the other hand, there may be a return to it, because capitalism was not inevitable. And if it is a historical phenomenon, that is to say, if it has a beginning, as with all other things historical, it will also have an end. With the population moving from 6 billion to 9 billion by 2050, and the continuing depletion of the world’s resources — primarily water, but also oil and minerals of all kinds — to feed the capitalist notion of an endless feast constantly renewing itself is not in the cards.

Are we getting close to the last supper?

Appleby would say that reforming the system is what we should hope for. That’s what a lot of the environmentalists say when they start talking about taxing carbons and treating the environment as a commodity in which you can trade as one would trade in other capitalist markets. I don’t think that’s true. Jared Diamond wrote a book a couple of years ago called "Collapse," in which he says that ideas, civilizations, in a state of decay cling desperately to the systems that are no longer functioning. And it’s also probably true to say that capitalism in its stronger forms went out the window in the United States in the 1930s, because now, once you get the combination of government and business — I mean, speaking to Diamond’s point — propping up a system that is essentially dead in the water is what we’ve done with the government takeover, the stimulus bill, the TARP. I suspect we’re attempting to rescue a corpse.

And it might be best to let it die?

Let it die and hope that it will be replaced by something that we know not yet.