Stung by his primary loss to Christine O'Donnell, Mike Castle is the next Republican to toy with a write-in effort 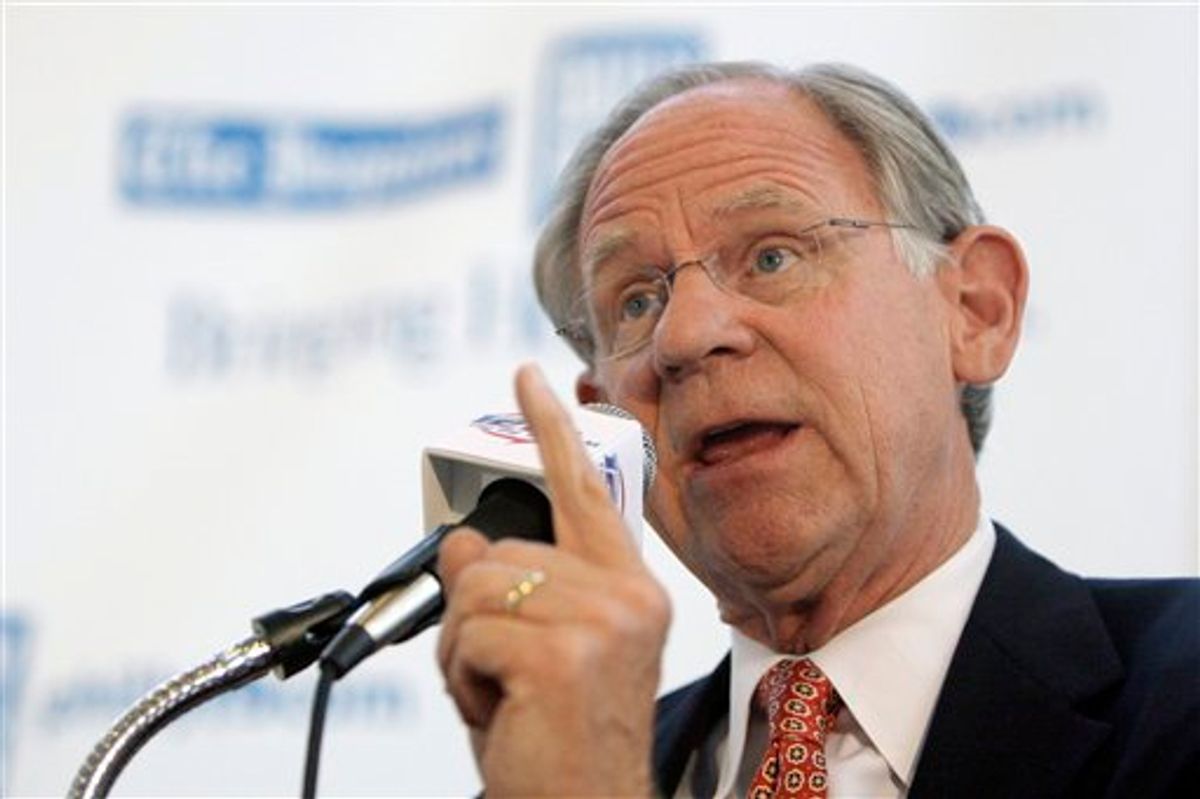 FILE - In this Aug. 31, 2009 file photo, Delaware Republican Senate candidate, Rep. Mike Castle, R-Del. answers a question during a town hall meeting in Philadelphia. Christine O'Donnell line kicks with her tea party backers, who hope this display of irrational exuberance translates into votes in Tuesday, Senate primary. She faces the full force of the Republican establishment in her bid to seize the nomination from Rep. Mike Castle, R-Del.(AP Photo/Matt Slocum, File) (AP)
--

Call it a mini-trend: Establishment Republicans suffering humiliating primary upsets at the hands of Tea Party insurgents, then turning around and running write-in campaigns for November.

Sen. Lisa Murkowski, who was blindsided by Joe Miller in Alaska's Aug. 24 GOP primary, made her move last week, and now Rep. Mike Castle, who was last seen losing to Christine O'Donnell in Delaware's GOP Senate primary last week, is floating a trial balloon of his own.

"I will consider it right up until the final moment, but I'm not headed in that direction right now," Castle told the Wilmington News Journal. According to the paper, he has until next Thursday to launch an official write-in campaign (otherwise, apparently, write-in votes for him won't be counted).

As with Murkowski, it's hard to imagine Castle actually winning as a write-in candidate. (The only senator ever elected on write-ins was South Carolina's Strom Thurmond in 1954.) But given the small size of the electorate and voters' familiarity with Castle (he's been running statewide every two years since 1992, and he served two terms as governor before that), he could pull a significant chunk of the vote.

On paper, the prospect of write-in campaigns from Murkowski and Castle is great news for Democrats.

In Alaska, where it takes extraordinary circumstances for a Democrat to win a statewide election, Murkowski's effort holds the potential of depriving Miller of the votes of less conservative Republicans (and Republican-friendly independents), leaving him with just the hard-right Tea Party base of the GOP. If that kind of split were to emerge, Scott McAdams, the Democratic candidate, would then have an opportunity to win by uniting the Democratic base and Democratic-friendly independents. In Delaware, a Castle write-in bid could do roughly the same.

But there's another possibility, too: that Murkowski and Castle, with their broad name recognition and new status as moderate Republican martyrs, could actually eat into the Democratic base, winning votes from independents voters who would otherwise consider the Democratic candidates.

In fact, this seems to be exactly what's happening in Alaska, where the latest poll has Miller comfortably ahead with 42 percent, followed by Murkowski at 27 percent and McAdams at 25. We haven't seen any similar numbers in Delaware, but there is a potential risk for Democrats. Right now, Chris Coons, their nominee, has opened a double-digit lead on O'Donnell. That lead is built on the unwillingness of some Republicans and many independents (who would all otherwise vote for the GOP candidate in a year like this) to back O'Donnell. So if Castle enters the race, the loser could be Coons, whose share of the vote would probably drop sharply -- even as O'Donnell's, whose support is now basically limited to the GOP base, would probably stay about the same. In a two-way race with Coons, the 40 percent or so she's now attracting will get her clobbered; in a three-way race, it could be just enough to win.

There's a precedent for this kind of dynamic hurting Democrats. Back in 1980, the GOP's base was also in revolt against the party establishment, resulting in New York Republican Sen. Jacob Javits' upset loss to Al D'Amato in a GOP primary. Javits then ran in the fall on the old Liberal Party line. He had no chance of winning, but his presence ate into Democrat Elizabeth Holtzman's tally. She ended up losing to D'Amato by a point -- with Javits drawing 11 percent.