Why Jonathan Franzen is the wrong face for "Franzenfreude"

Yes, white male writers are too dominant in highbrow literature, but the "Freedom" author is one of the good guys 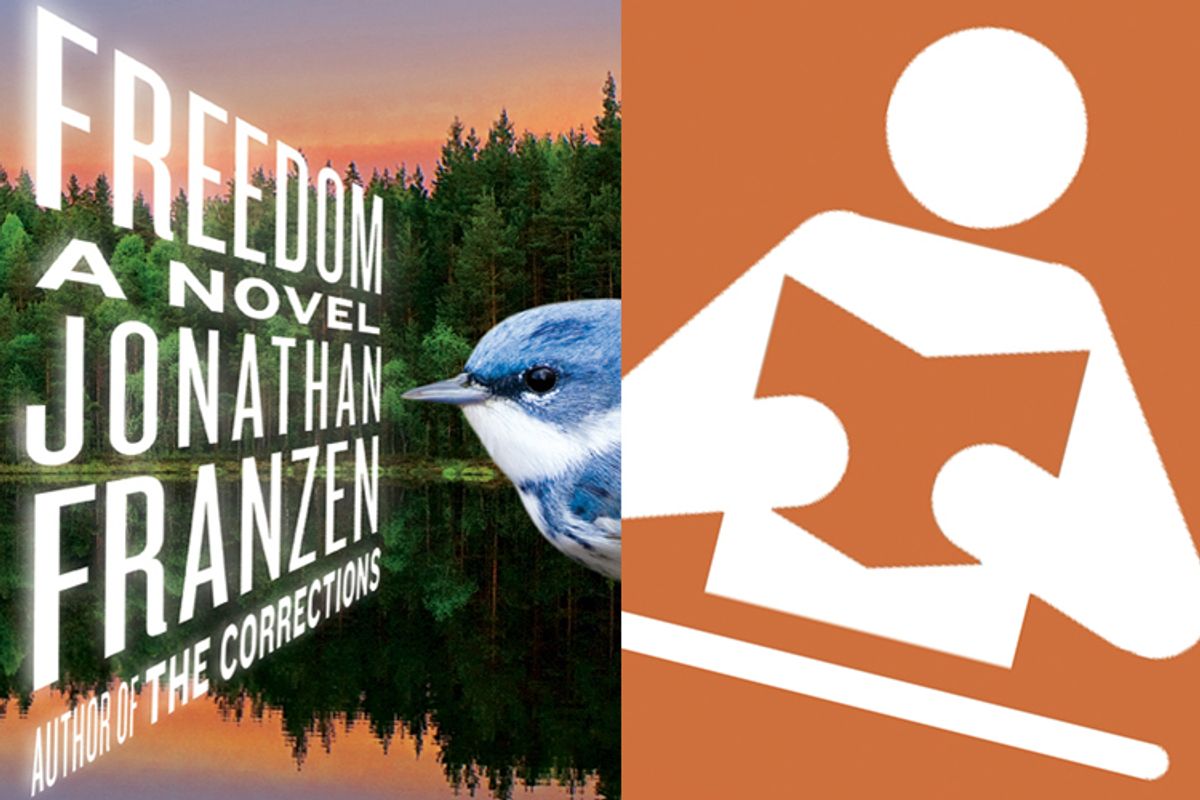 Having finally released three books back into the wild of the Brooklyn Public Library system -- "Freedom," "Catching Fire" and "The Passage" -- I feel the time is right to weigh in on the literary meme of the moment, "Franzenfreude," a term that, loosely defined, indicates that author Jonathan Franzen represents all that is wrong with the contemporary highbrow book world.

Is that stupid? Quite! Except there's a caveat. The phenomenon referred to by "Franzenfreude" -- the idea that the highbrow book world reserves its highest praise and most fawning attention for the works of men -- is absolutely true. It just happens that Jonathan Franzen is a terrible poster boy for that problem.

Franzen writes gorgeous women. Fleshed-out, interesting, three-dimensional, vivid women, women with brains. He writes for them, too, and perhaps most important of all, he reads them. When, at a Brooklyn Book Festival panel, someone asked him what he was reading, he replied, "Edith Wharton." To the follow-up question of what should we, his audience, be reading, he listed several books, all by female authors, including the "Ms. Hempel Chronicles," of which, up to that point, I hadn't even heard. (Then I read it. It was good!)

A friend and I cornered him after the panel to ask whether he'd realized he'd been promoting work by ladies. He blinked for a moment, then laughed and said it honestly hadn't occurred to him.

Thus, "Franzenfreude" is the wrong label for this particular can of worms. (As a language nerd points out, it's also stupid for other reasons.)

That said, let's address the can of worms itself. Yes! Fiction by women is customarily and routinely dismissed by the intelligentsia in favor of fiction by men. Because why should fiction be any different than anything else? The most exalted spaces in any pantheon are reserved for men. So it has been, so it will be. This is because women can have babies, whereas men can only have egos, and also testicles, or something.

However! The less important the pantheon, the more likely it is that you can find a woman at the top of it.

The highbrow book world also dismisses almost all genre fiction. Genre fiction is where women reign supreme or, at the very least, hold their own: romance, mystery, young adult, sci fi, fantasy. Having just ingested the "Hunger Games" trilogy, a sci-fi Y.A. extravaganza that took not just me but America by storm, I feel particularly drawn to this point right now.

Even in most genre fiction, there remains an idea that boys won't read books about girls. Hence the sad-but-true fact that J.K. Rowling couldn't publish under the name "Joanne" for fear of frightening off huge numbers of young male readers. But this to me feels wrong. Step on the NYC subway right now and look around -- I guarantee you that someone on that car is reading not "Freedom" but "The Girl With the Dragon Tattoo." That book is about, as you've perhaps heard, Lisbeth Salander, one of the most kick-ass female characters in any book of any genre. The "Golden Compass" books didn't suffer for focusing on Lyra, another quite impressive young woman. Even Dan Brown's idiot bestseller "The Da Vinci Code" was a feminist conspiracy theory.

Best of all, perhaps, is Suzanne Collins, whose hugely popular "Hunger Games" books center around Katniss, who doesn't want to get married and doesn't understand why having leg hair is bad. Written by a lady! Starring a lady! Yet everyone's reading them. Hopefully the next J.K. Rowling can be inspired by this and publish under her full name.

This doesn't, of course, solve the problem of the white male tastemakers -- and the sufficient numbers of female tastemakers who concur -- giving all the plaudits that matter to white male authors. As Adam Gopnik, a New Yorker author I admire, put it just this year in his tribute to J.D. Salinger: "In American writing, there are three perfect books, which seem to speak to every reader and condition: 'Huckleberry Finn,' 'The Great Gatsby,' and 'The Catcher in the Rye.'"

What Gopnik meant to say, no doubt, was, "Here are three books I really dig!" He's hardly the first intellectual to fall into the tar pit of generalizing from his own experiences. But it's a disturbingly prevalent trend among white male tastemakers: assuming that what they relate to and find meaning in, the rest of us must as well, and that those books must be "the best."

It's crap, and I'm glad people are finally beginning to realize that. But leave Jonathan Franzen out of it, would you? He's one of the good ones.

Ester Bloom's writing has appeared in the Apple Valley Review, Conte: A Journal of Narrative Poetry, The Morning News, PANK, Bundle, Nerve.com, and Salon.com, and is collected on her website, esterbloom.com. She is currently at work on a book of comic essays entitled "Never Marry a Short Woman."