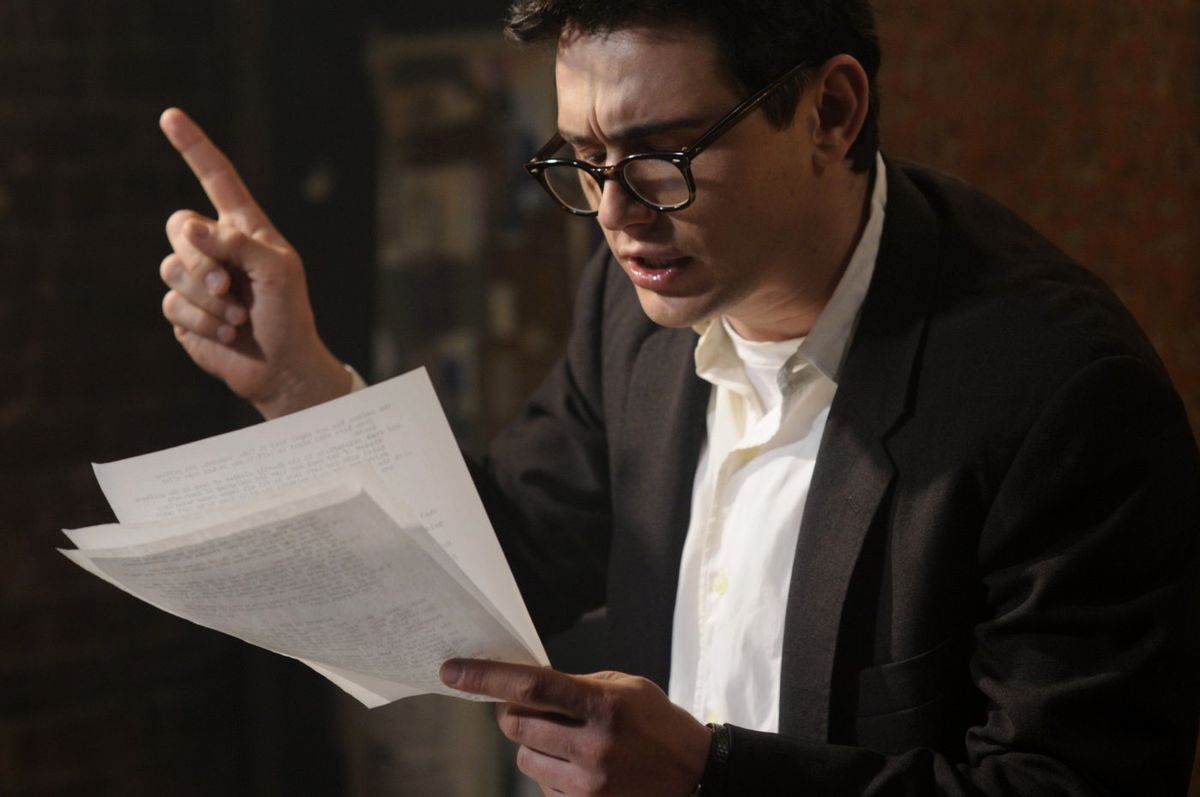 Rob Epstein and Jeffrey Friedman's movie "Howl," which features one of James Franco's best performances to date, as legendary Beat poet Allen Ginsberg, is a very mixed bag. It's an oddly dry fusion of documentary and narrative film that arguably doesn't quite click on either level. But I honestly feel bad about pissing on a movie that has so much beauty and purity of spirit in it, so let's accentuate the positive. Fans of either Franco's acting or Ginsberg's poetry absolutely have to see this, of course, and it features a memorable, if controversial, animation by Eric Drooker that illustrates both the themes and the literal story of Ginsberg's eponymous poem.

I've heard various complaints about the casting, and of course it runs the risk of glamorizing a person who was devoted to celebrating the fleshly delights of earthly creation. Yes, Franco is a remarkably handsome man and -- at least to many people's tastes -- Ginsberg wasn't. But when I reviewed "Howl" at Sundance in January, one commenter observed that Franco looks exactly the way Ginsberg wanted to look, and looks a lot like the hetero hipster dudes Ginsberg tended to fall in love with. Whether that's the reason or not, Franco pulls it off; he's wonderfully awkward, vulnerable, even animalistic at times. It's a beautiful and nearly perfect performance, even if the physical resemblance is not strong.

Here's what I wrote about "Howl" when it opened this year's Sundance Film Festival. I've made a few edits for clarity and flow.

Allen Ginsberg's proclamation that he had seen the great minds of his post-World War II generation brought low and risen high, that he had seen them fucking in the gutter and melding with the angels -- and indeed that it was not possible to tell where the gutter ended and the angels began -- is beyond any doubt one of the great poetic accomplishments of the 20th century. It is lots of other things besides: a rhythmic collage of startling, jazz-beat images, brilliant in intensity, that do not all cohere; a paean to the pleasures of the flesh, and in particular the homosexual variety; a testament of Ginsberg's unrequited love for a series of straight men, among them Jack Kerouac and Neal Cassady; an homage to Ginsberg's poetic master and progenitor, Walt Whitman.

The title of Ginsberg's "Howl" suggests a cry of rage and pain. The poem certainly expresses those emotions, and came to be widely understood as a symbolic protest against 1950s conformist America. But Ginsberg's howl is at least as much a cry of animalistic joy, and even more than that an expression of pure Whitmanesque human feeling, meant to contain multitudes. Played by James Franco in an uncanny impersonation that lies at the heart of Rob Epstein and Jeffrey Friedman's film "Howl," Ginsberg explains this to an unseen interviewer. The poem's central piece of subversion, he says, lies in its most famous (and infamous) line, which comes when his nameless collective protagonists "let themselves be fucked in the ass by saintly motorcyclists, and screamed with joy." An American audience, even one that has traveled with him this far, says Ginsberg, will expect the man who is anally penetrated to scream in pain. But that is not the truth of homosexual desire, or of the human body.

That line shocked many people in 1955, leading to the San Francisco obscenity trial Epstein and Friedman's film depicts, but what's much more surprising is that it retains at least some of its startling effect more than 50 years later. One of the points raised by the film "Howl" -- perhaps only in passing, or by accident -- is that for all the public discussion of homosexuality in recent years, we still haven't caught up to Ginsberg's rapturous, confrontational descriptions of the pleasures men find in each other's bodies. (For that matter, we don't talk about heterosexual lovemaking in such fulsome terms either, and perhaps we'd be better off if we did. Ours is a pornographic age, not an erotic one.)

Epstein and Friedman's loving and often lovely tribute to Ginsberg's poem is a film about an archetypal American nonconformist, made by a beloved pair of indie-film veterans whose collective résumé includes two Oscar-winning documentaries, "Common Threads: Stories From the Quilt" and "The Times of Harvey Milk" (in many ways the forerunner of Gus Van Sant's "Milk"). It's an affectionate and artistically audacious movie, and I wish I could tell you it lived up to its source material.

Epstein and Friedman at first intended to make a documentary about the creation, performance and prosecution of the poem that catapulted Ginsberg from being an unpublished and unknown New York-San Francisco drifter to an international celebrity. Somewhere along the way they became captivated by the idea of illustrating the poem with animated sequences (by Eric Drooker) and then by the idea of dramatizing, or halfway dramatizing, the circumstances around it. But there are virtually no lines of spoken dialogue in the film that aren't supplied by the public record: Ginsberg's interview, the obscenity-trial transcript, the text of the poem itself. I'm sure the filmmakers have a theoretical defense ready for this strategy, but it leaves us with a movie that's neither fish nor fowl, no longer a documentary but not yet a narrative feature.

Franco is an actor of tremendous charisma, and he captures Ginsberg's New Jersey Hebrew-school intonation and physical mannerisms so perfectly that I forgot, for long stretches of the movie, that I was watching a performance. But Epstein and Friedman leave him hanging out to dry, almost literally; the actors playing Kerouac, Cassady and Ginsberg's longtime lover Peter Orlovsky never speak at all. As for the trial sequences, in which a number of Bay Area academics haggle amusingly over the meaning and value of Ginsberg's "Howl" (one of them was Berkeley professor Mark Schorer, a colleague of my father's), they don't have much to do with Ginsberg himself. The man on trial was his publisher, Lawrence Ferlinghetti (another character who never talks); Ginsberg had moved back to New York and never entered the courtroom.

That leaves us with the great strength and great weakness of Epstein and Friedman's film, the reading of "Howl" by Franco over Drooker's animations, which strike me as both beautiful and excessively literal-minded. Drooker and his staff of Thai animators seem to channel "Waltz With Bashir" at some moments and Disney's "Fantasia" at others, with a detour into the world of "Transformers" along the way. I could see, at moments, what the filmmakers were driving at: a campy, gorgeous picture-book rendering of Ginsberg's poem, in which entwined seraphic couples whirl through the sky, terrified suicides plunge to earth, pages of poetry burst into flame and Moloch is a huge "Night on Bald Mountain" cartoon demon presiding over a landscape of smokestack phalluses.

But Epstein and Friedman never answer the question they raise: Does "Howl," with all its intensely vivid and imagistic language, its conjurer's madness, really need pictures? It's done pretty well as a poem up till now, and more than once during Franco's reading, I simply closed my eyes and listened.