How come my husband gets to let himself go?

His weight goes up and down. He can't stick to a diet or fitness plan. Am I the only one who has to stay in shape? 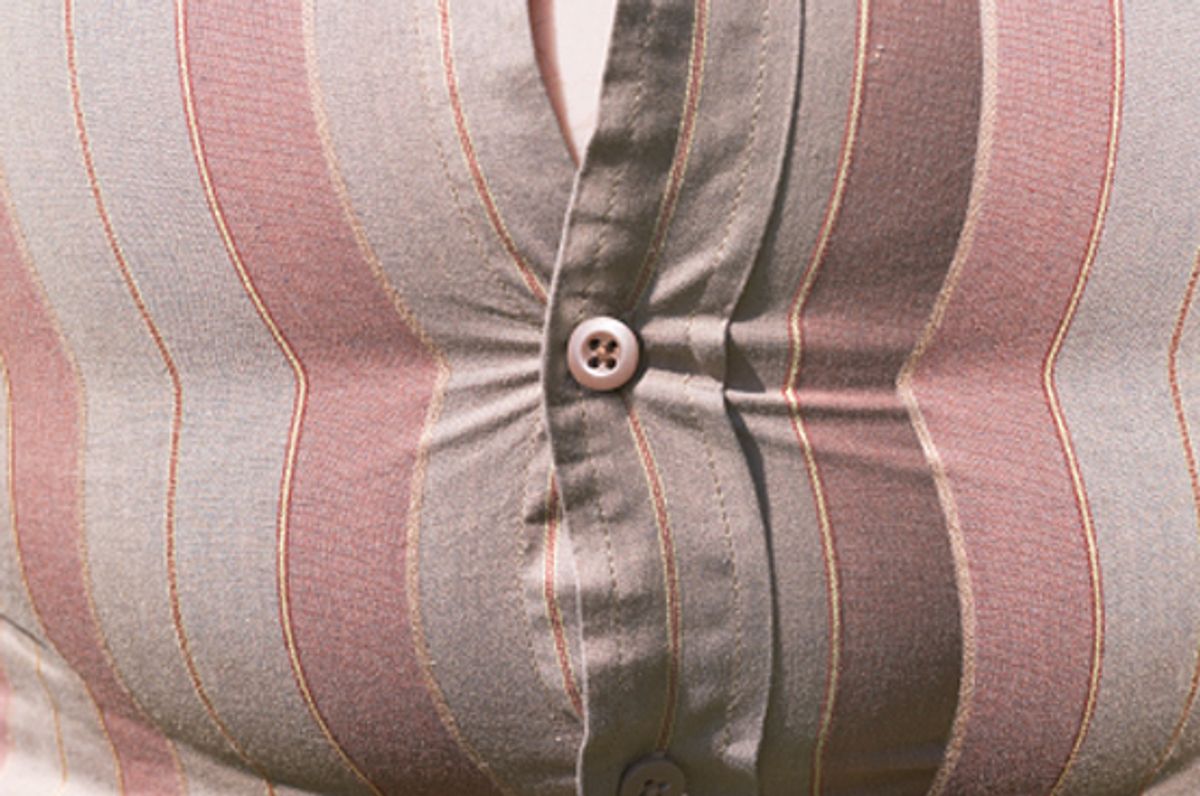 "I need you!" my husband yells from the hotel bedroom.

I fly out of the bathroom to find him face down on the floor.

"What happened?" I ask, attempting to remain calm but already annoyed that he appears to have injured himself, yet again, in the midst of an all-too-rare vacation.

"Back spasm," he groans, his cheek pressed against highly suspect hotel carpeting.

"I guess we're not going to the gym," I accidentally say out loud.

"Too bad. I was really on a roll," he says, referring to yesterday's workout -- his first in a year and the promised kickoff to a much-procrastinated lose-25-pounds-eat-right exercise initiative.

"Yeah, you were," I say, my voice drifting off along with my perennial dream of jogging on the beach, hiking or treadmilling in tandem with a fit, healthy husband.

A work crisis. A restless night's sleep. An aching pinkie. When it comes to exercise excuses, my husband is unrivaled. Leave it to him to sabotage his comeback with an over-zealous, injury-inevitable performance in the gym yesterday.

A hand? How about a kick in the derriere?

"I love working out," he said when we first met. He was a buff, 21-year-old first-year law student. I was a naive, 17-year-old college freshman. I assumed he'd have those rock-solid abs forever. Forever lasted one semester. By the second, trips to the gym ceased and sweats replaced his size 32 jeans. Struggling to shed my own freshman 19 and too infatuated with him to really care, I assumed his condition, like mine, was temporary.

It was. If by temporary you mean the two years that passed before he rediscovered his passion for fitness. Seemingly overnight, hours on the couch became hours at the gym. His cheekbones returned. His six-pack reappeared. His pants zipped. He became sanctimonious -- chomping raw vegetables at the movies while eyeing my popcorn disdainfully. ("Do you have any idea what's in that?") Smug. ("Can you believe the way people let themselves go?") Superior. ("It's not like working out regularly is that hard.") So what? The abs were back.

And then, without warning, they vanished -- along with gym visits, broccoli florets and the self-righteous attitude. How, I wondered, could he throw away all that hard work? Was it my fault? Had I not sufficiently praised his determination? His well-defined pecs? His stir-fry? Crushed as I was, I didn't panic. I'd seen tangible proof that transformation was possible. He'd done it once. He'd do it again.

I was still repeating that mantra two years later on our honeymoon. Distressed by the love handles (in retrospect so relatively small and insignificant) spilling over the top of his bathing suit, I sent subliminal "get thee to the gym" signals to him as he circled the breakfast buffet loading his plate with eggs, waffles and pastries. Petty? Yes. Superficial? Absolutely. Justified? Definitely. Was I the only one who had to stay in shape?

"Let's join a gym," he said when we returned home. My messages miraculously received, I immediately signed us up at a nearby health club. He went religiously, returning home each evening exuberantly pontificating on proper push-up technique, the distinction between fast and slow twitch muscles and the delicate balance between carbs and protein. Life was good. New marriage. New apartment. New gym-going husband. Until, one day, he left his workout bag at home. And again the next day. And the next.

"Who has time?" he said, overwhelmed by the reality of a get-there-early-leave-late career. "Exercising at home is more efficient." Skeptical that the short stroll to and from the gym was a major time-sucker, I feigned enthusiasm as free weights overwhelmed our living room and an Arnold Schwarzenegger bodybuilding bible monopolized his attention.

"Squat deeper," he called from the couch, where he'd taken up residence once the thrill of the home gym wore thin -- leaving me and my guilt-ridden conscience (I felt compelled to use not only the gym membership but the new equipment) to bear the burden of the barbell.

"An exercise bike would be good cardio," he said a few months later. "Weights alone aren't going to cut it." Not when you don't use them.

A disturbing pattern was emerging. While I got cranky if I missed a day of exercise, he enjoyed extended periods of slackerdom until inspiration struck -- perhaps initiated by a favorite shirt that wouldn't button, a "you ate that entire veal parmigiana?" remark from me or, more likely, a riveting late-night "fit in 30 days" infomercial. An academic pursuit (research gyms, evaluate fitness equipment, compare and contrast diets) would commence. Next up, the never-small financial investment. ("You can't skimp on equipment. It has to last.") Finally, the physical endeavor would ensue. Duration? Predictably unpredictable.

My husband, as I eventually acknowledged, was an all or nothing man. I was his reluctant accomplice. Although I longed for a "normal" husband who kept his weight in check, satisfied his sweet tooth with a small daily serving of frozen yogurt and maintained a non-anxiety-provoking cholesterol level, I was intoxicated by his bursts of arm-flailing enthusiasm -- whether for a rice cooker, heart-rate monitor or Bosu ball -- and ever-hopeful that eventually his "all" would stick.

I charted our life together not by new cities, jobs or homes but by the fitness bandwagons he embraced. There was a rowing machine (remember those?). A recumbent bike. A treadmill. Another set of free weights (the first donated to movers who hardly needed them) and a bench press. A second gym membership (close to work). A third gym membership (close to home). An ab roller (an infomercial must-have). A city bike. A mountain bike. A personal trainer. Spinning. Yoga. Martial arts. A bright red punching bag hanging from the basement ceiling that bopped me on the head each time I did laundry as if trying to knock some sense into me.

In between the gym memberships and equipment purchases, there were carb-loading, gluten-free, juicing and high-protein diets. There were mesmerizing monologues on the power of exercise and holier-than-thou rants about the less holier-than-thou. There were "I don't eat bread" pronouncements to bread-basket-waving waiters. There were pants size downgrades. And upgrades. Declarations of determination. Final Sunday pizza dinners. Countless Monday fresh starts. Refrigerator purges. Trips to produce stores. Fish markets. Vitamin shops. Twenty pounds lost. Twenty-five gained. The ecstasy of the endorphin high. The agony of starting from scratch. Again. And again.

There was frustration. As my husband's nothing periods expanded, so did his waist size. Lusting over six-packs had morphed into obsessing about his health. And my sanity. Five, 10, 15 years into our marriage, I still couldn't crack his code. He couldn't be charmed, cajoled or shamed into dieting or gym-going. Where was his sense of panic, guilt, vanity? My mind raced. Didn't he love me enough to take care of himself? Didn't he want to be around for our daughters? Why was he the one who got to let himself go?

"I'm hungry all the time," whined Mark, the brawny, 6-foot tall boyfriend of my über-fit friend Courteney, during my first visit to their apartment. "Courteney won't let me eat," he said, when I noted their sleek but barren refrigerator. Nearly drooling, Mark pointed out the window to the new hamburger place on the corner and sadly said, "I'm not allowed to go."

"For you," Courteney said, handing him a sample-size sliver of pear topped with a speck of cheese. Watching him savor it with the intensity of someone unsure of his next meal, I felt sorry for him but in awe of Courteney's power.

Clearly, I was no Courteney. I could no more carry on a conversation while stair-climbing than convince my man to trade a muffin for a hundred-calorie snack bag. But each time I was ready to accept my impotence and embrace a fuller-figured husband, he'd suddenly shift into "all" mode. Despite myself, I'd get caught up in the excitement. We were a low-fat-cooking, complaining-about-aching-muscles team. This time it would last. I could already picture us as one of those obnoxiously fit, clean-eating, dessert-declining couples. Then, a bad night's sleep, an elbow injury or a too-tempting takeout menu would send him down the slippery slope. Protein powder was chucked. Vegetable juice soured. Lettuce wilted. I was left holding the bag, the weights, the yoga blocks.

Often, I blamed myself. Although I kept a steady exercise routine -- interrupted only by the sporadic supplementation of his equipment castoffs -- I wasn't perfect. An offhand, "How 'bout pizza?" from him, and I'd cave. Why, I'd silently scream as I clutched my bloated post-pizza belly, wasn't I stronger? By indulging my weakness, I'd opened the door to his next downward spiral.

During a prolonged "nothing" spell, a friend encouraged my husband to run a marathon. Uncharacteristically, he followed the slow and steady training protocol. Characteristically, he bought "the best" running shoes, a moisture-wicking wardrobe and countless packs of Gu, an aptly named "energy gel." Raving relentlessly about the race, he was happier than I'd ever seen him. Then, two months before the marathon, he became debilitated by pain and learned that running had destroyed a hip. The marathon was history. Malaise usurped exuberance. Months after a hip-replacement operation and subsequent rehabilitation, he remained disheartened. Dropping even the breeziest of "thinking of exercising" hints seemed cruel.

Old habits, unlike hips, die hard. Poof! My husband woke one day ready to roll. Before I could protest, a giant elliptical trainer arrived -- eclipsing the Zen-like atmosphere of our bedroom. Each night he set the alarm for an early morning workout.

Each morning, when the alarm went off, I mumbled, "Time to use the machine."

"Not happening," he replied before dozing back off. Rolling away from him in anger, my gaze fell on that monstrous machine and my blood boiled. Twelve monthly interest-free payments later, he had used the elliptical three times. Had the "all" morphed into almost nothing?

My patience depleted, I did what any loving, caring and exhausted wife would do: I recruited my young twin daughters into the battle. With little prompting, they pleaded with their father to exercise, gave him the nickname "Fluffy" and suggested he stop eating "Fluff size" portions. When they encouraged him (far from thin but hardly contestant caliber) to join the cast of "The Biggest Loser," it was obvious the students had surpassed their master. "When we're on vacation, I'll start over," he said, finally succumbing to pressure from his progeny. That familiar flutter of hope returned.

"Are you going to help me up or what?" he says from the floor of the hotel room, shaking me out of my walk-down-fitness-lane reverie.

Still tempted to kick some sense into him, I refrain. Instead, I grab my camera and shoot a picture -- "My husband, prone on vacation" -- for posterity. Then, I lie down next to him. Staring at dust balls and UCO (unidentified carpet objects), we laugh hysterically about being floor- not beach-bound, about his endless string of unsolved "injuries" and his museum-worthy collection of exercise paraphernalia. What's the alternative? Give up? Throw in the gym towel? Impossible. My husband might not be the biggest loser, but he's the loser I love. Besides, the 90-day extreme fitness DVD workout he ordered should be waiting for us when we get home. I've got a good feeling about it.

Hyla Sabesin's work has appeared in the Chicago Tribune, Chicago Parent, imperfectparent.com, The Christian Science Monitor, The New York Times’ "Modern Love," Self and Italian Glamour. She lives in Chicago where she can be found sweating away to the P90X workout DVD.