Is it fair to be angry at Lindsay Lohan? 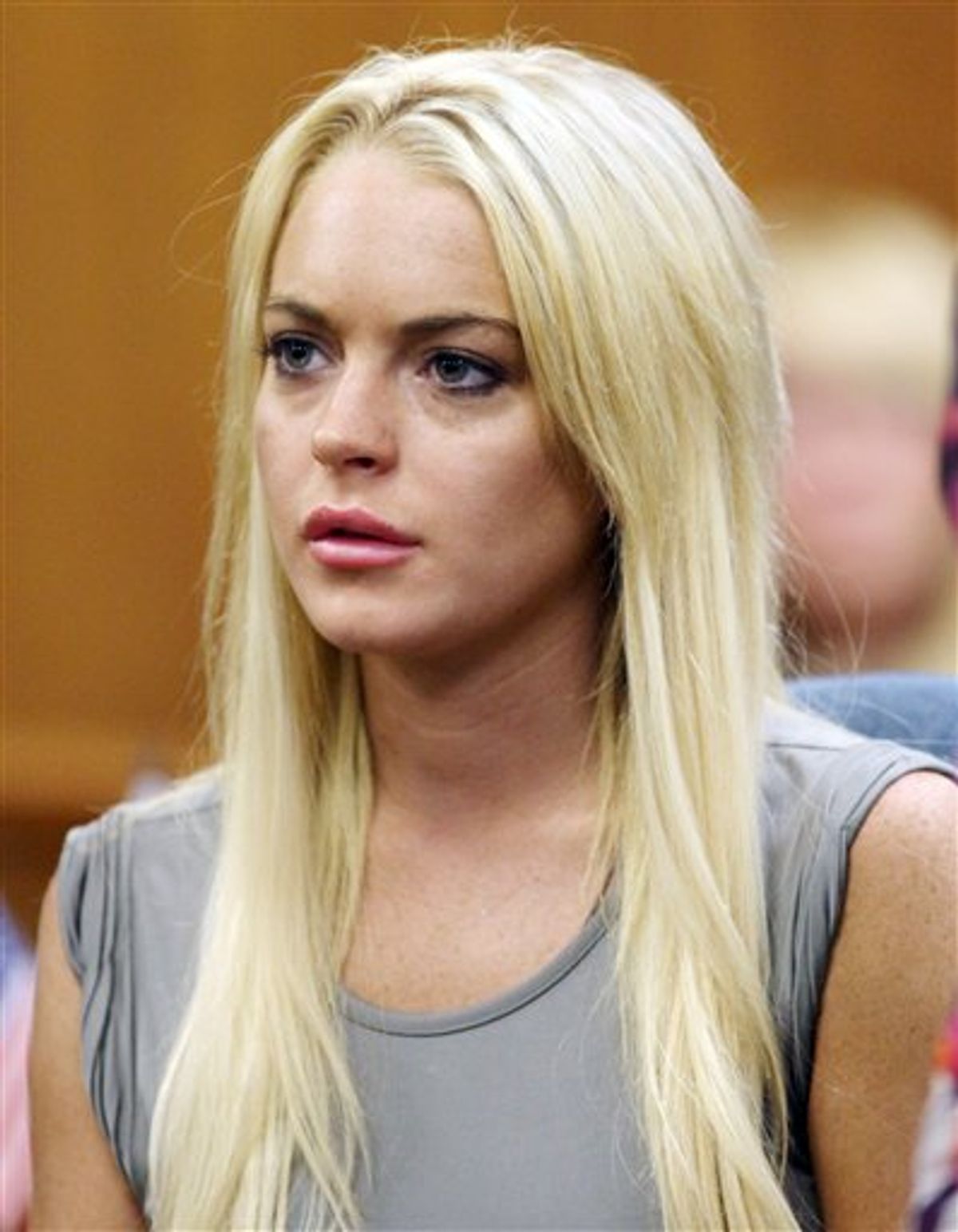 An addict can be the biggest jerk in the world. An alcoholic can rip out your heart and steal your wallet. If you want to know what it means to be frustrated, disgusted and straight up perplexed, invest a little of your time and energy in an active substance abuser. And if said possessor of a wagon he or she just can't stay on has been granted every opportunity to go straight -- counseling, support, stints at the best rehabs -- and can't manage something as simple as not getting falling-down messed up, well, that person has got to be a world-class ungrateful piece of crap. Yeah, we're talking about you, Lindsay.

Seemingly minutes after serving two weeks in jail for a probation violation stemming from her 2007 DUI, the most famously troubled actress/self-tanning entrepreneur was back in rehab for the umpteenth time. And right on cue upon her release, she flunked her latest drug test earlier this month and wound up back in handcuffs.

Last week, as she prepared to head back on her apparent hamster wheel of jail, rehab and subsequent partying, she stated via Twitter, "I am so thankful for the support of my fans, loved ones and immediate family, who understand that I am trying hard, but also that I am a work in progress, just as anyone else. I am keeping my faith, and I am hopeful.... Thank you all!!!"

Yet with every reliably timed relapse, her claims of "trying really hard" ring increasingly false. There's Lindsay, the desperate-to-improve-her-public-image starlet volunteering at a Los Angeles outreach center -- and tweeting conspicuously about her good works. There's Lindsay, the woman with every envy-inspiring advantage in the world, gazing gorgeously from the cover of the current Vanity Fair and moaning that she is "literally falling apart." And there's the hollow-eyed young woman with an uncanny resemblance to the actress crouching in a corner and clutching a syringe. She sure doesn't look like a woman trying hard. She looks like a woman who has selfishly wasted a hundred more opportunities to pull it together than most substance abusers ever get in a lifetime, one who, were she not beautiful and wealthy, would be selling her food stamps for cough syrup. You can see why she pisses people off, why so many people think that pretty face looks like it could use a book or two thrown at it.

That's the way it works with addiction. And depression. And lots of other conditions that aren't friendly and noble and can contaminate everybody in the sufferer's circle. The compulsions to do exactly the most self-destructive thing in the world don't just make the addict despise him- or herself; they do a bang-up job shutting everybody else out as well. You can watch, helplessly, wondering how someone could not want wellness enough, could not love you enough, could choose a bottle or a powder over career or family or everything good so close within reach.

A friend recently had her heart broken by a great man, a talented man with a kid and loving parents, who decided that after a long time of being clean that he preferred the company of  heroin. What kind of a loser throws all that away? If you're fortunate enough to not be wired that way, it's damn near unfathomable to accept that it's because something powerful inside that person wants him or her dead.

But self-destruction is a two-way relationship between a person and his or her own demons, and plenty of people somehow do manage to get the upper hand. Whether it's through rehab or 12-step programs or therapy or sheer force of will, the world is full of men and women who work very, very hard every day at being functional and succeed. So it's easy to point and say, Christ, Lindsay, if Eminem and Russell Brand can do this, what's your holdup?

Unfortunately sobriety is not transferable. And the fact that Lohan is still very much a protected figure with easy access to all the temptations available to a Hollywood beauty can only add obstacles to her path. It's not easy to be the diabetic at the candy factory. Maybe she needs somebody to let her wake up in her own urine a few times, to not post her bail, and not let her be on the cover of magazines looking more like the Princess of Monaco than a serial rehab truant. Then again, maybe none of that would make a lick of difference. Because for all Lohan's privilege, addiction is an equal opportunity condition. It doesn't care how much money or fame or sex appeal a person has; it just wants everything she's got. And as grim as it is to look at someone in a tailspin and see so much that's ugly and selfish, it's harder still to see so much that is talented or funny or just plain good, locked inside a human being drowning in a sea of poison.