The heiress sued Hallmark over a greeting card. But what's really at stake? 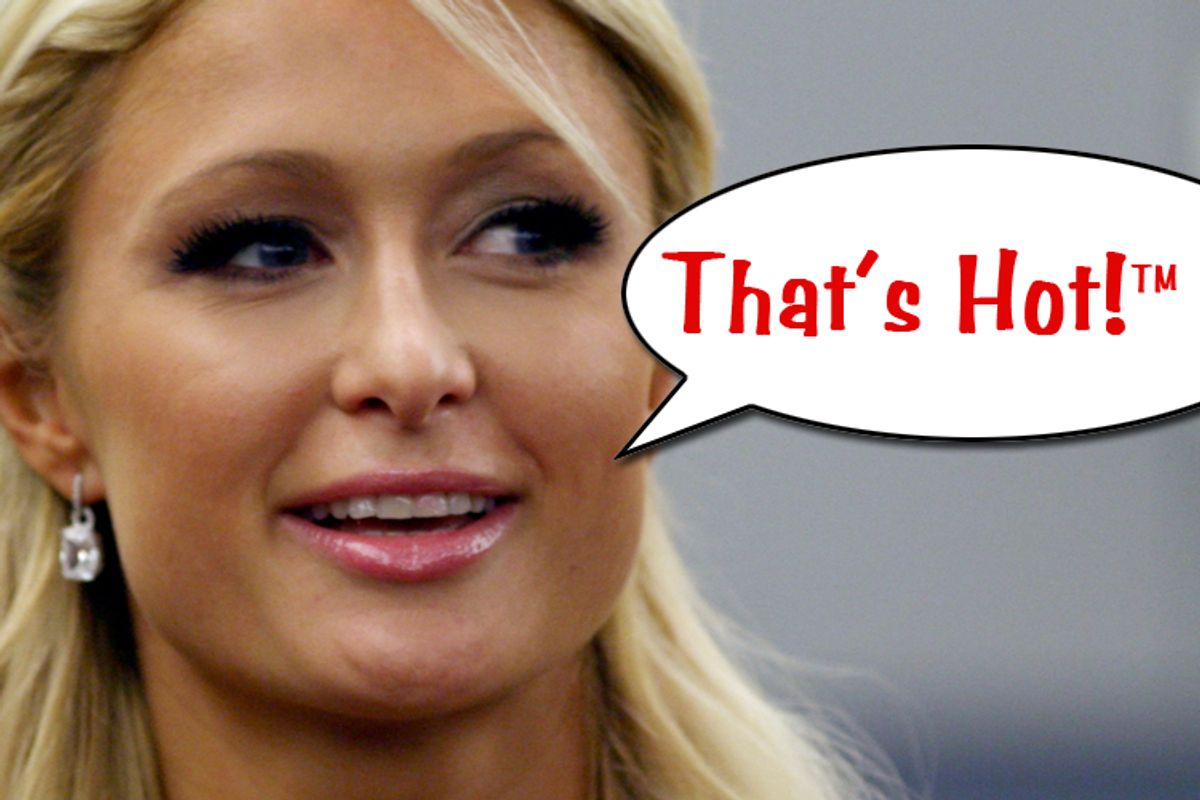 What's the weather like in your neck of the woods today? Should the answer be something in the unseasonably warm range, you might want to choose your next few words carefully, because Paris Hilton is watching. The blond heiress, who made being inexplicably famous a thing well before anybody knew what a Kardashian was, is savoring the sweet taste of legal triumph today. She has settled her lawsuit against Hallmark over a greeting card that depicts her declaring, "It's hot." And they say the system doesn't work.

Hallmark messed with the wrong coke-carrying reality star when the trademark phrase -- no, seriously, Hilton has trademarked the phrase -- was the subject of a 2007 greeting card that cast "The Simple Life" star as a waitress informing a diner of the temperature of his victuals. Hot! Get it? Why anybody who actually cared enough to send the very best would waste a stamp on this sad excuse for a card is an enigma. What occasion in life would call for a Paris Hilton as a food server greeting? The late 2000s were a very different time, but I don't remember Hilton's existence becoming a greeting giving opportunity.

Hilton upon learning of the existence of said abominable sentiment was not content to merely pout, shake her long golden extensions, and declare, "Buh?" Instead, she slapped Hallmark with a $500,000 lawsuit, claiming the company was "willful, malicious and oppressive" and "invaded [her] right to privacy."

One could argue that if you let one major greeting card company use your likeness, the integrity of your whole public image is compromised. One could also argue such a thing doesn't really seem to be a hazard for someone who serves as the spokesperson for canned wine. Nor does the use of Hilton's face itself truly seem to be the issue: While she sued over the waitress card, she apparently took no umbrage over one that portrayed her behind bars savoring the "really, really, really, really simple life."

Just because you're one of the most intentionally overexposed individuals on the planet doesn't mean you're not entitled to privacy. And just because you're Hallmark doesn’t mean you get to appropriate every self-aggrandizing T-shirt mogul who comes down the pike for your own purposes. And it's fair to say that anyone of sound mind who found his or her image on a card as lame as that Hallmark greeting would no doubt want the perpetrators punished to the full extent of the law.

But, Paris, can't you take a joke, however poorly executed it may be? Are you going to sue Opi for its "That's Hot Pink" shade of nail polish? Should the City of Light be worried that it shares your name? Emeril Lagasse, outdoing you for trademarked brevity, may own "BAM!" but the Brooklyn Academy of Music has so far been spared his wrath. Even Michael Jackson, who was notoriously territorial about the whole "King of Pop" thing, didn't get litigious every time somebody somewhere let out a "sha-mon!"  And while Disney has a long history of going for the throats of anybody who crosses its heavily branded path, you, Miss, are not the mouse. So perhaps the next time some hapless greeting card writer deigns to make a dumb joke at your expense, you can ask yourself if that's worth picking a fight over. Because the answer is -- that's not.