Welcome to the Tweetcom era

In the wake of "%$*! My Dad Says," another Twitter stream is optioned for TV. Here's why that's a bad idea 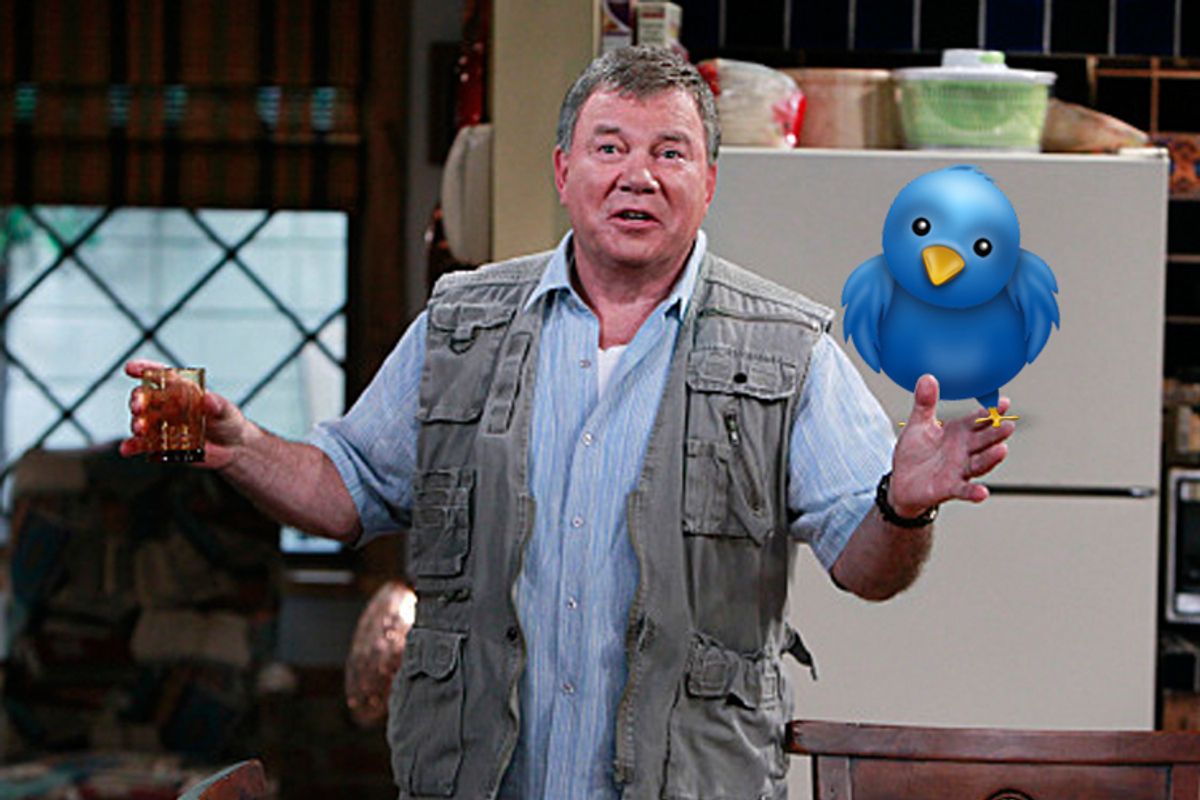 What could be less enticing than a CBS sitcom based on a Twitter sensation? How 'bout a CBS sitcom based on a Twitter non-sensation?  Coming soon, but likely not to your DVR, it's "Don’t Tell Steve," inspired by the ostensibly hilarious sound bites of one man's microwave Totinos Pizza rolls-loving slacker roommate. It's like "$#*! My Dad Says," 40 years younger! Naturally, King of All Twitter Ashton Kutcher will be co-executive producer. What, no love for Drunk Hulk?

Traditional media, in its ever-increasing last-chick-standing-at-the-bar-at-TGI-Fridays desperation, certainly can't be blamed for grasping at whatever might look like a sure thing. Whether it's book publishers or movie studios or television networks, the words "built-in audience" are even sweeter to them than "will work on spec." And sometimes, the cross-platform leap works. You get a Salon blog that turns into a bestseller that turns into a Meryl Streep movie. You might even get a William Shatner TV series that gets respectable ratings for its premiere (aided, no doubt, by its geeky lead-in "The Big Bang Theory").

But as crazy it seems to be saying this, more than 15 years into this whole Web thing, what works on the Net isn't necessarily meant for three cameras and a laugh track. And there's something arrogantly lazy about the vision of a pack of network executives sitting around asking, "What are the kids into?"

A really good Twitter feed, one that combines zippy one-liners with vivid postcards from an individual's life, can be a shining example of brevity being the soul of wit. It's not like David Simon is looking to create a new drama based on Fake AP Stylebook. But the same elements that make a fun tweet -- that rimshot-ready kapow of humor -- can also be found in the most mediocre shticky sitcoms. That's why talented comics like Michael Ian Black and Patton Oswalt are so well suited to both the stage and Twitter; their style is neither plot nor character driven. Similarly, dramas about Internet culture, like "The Social Network" or "Catfish," are compelling because they're stories about interesting people, not simple regurgitations of clever status updates.

Perhaps the most facepalm-worthy aspect of CBS's glomming on to a Twitter feed like Don't Tell Steve (which has considerably less sweet charm and significantly fewer followers than Justin Halpern's Shit My Dad Says) is the deeply entrenched notion that being an Internet success is not real success. Digital culture, powerful and all-encompassing as it is, still frequently finds itself treated like the scruffy upstart next to its more traditional siblings. Look at you, cute little Twitter feed! Don't you wish you were a sitcom? Hey, lucky blog! We're going to make a book of you yet!

A big network or publisher can still deliver more of the Benjamins than tweeting into the void ever will, but there's a deep cluelessness inherent in the idea that if it works in 140 characters, it'll translate elsewhere. And there's something galling about the presumption that it should. The small handful of true Internet breakout stars, whether they're Heather Armstrong or OK Go, succeed not because their Net-savvy makes them good enough for what used to be called the mainstream. It's because they deliver something that is genuinely appealing in any medium (most endeavors -- memoirs and songs and sitcoms -- are damn lucky to hit it out of the park in just one medium).

So maybe, instead of assuming that an entertaining Twitter stream is delicious, low-hanging development deal fodder, networks can let an entertaining Twitter stream just be that. And instead of wondering where the viewers are, they can come up with some new -- and original -- ideas. Who knows? If they're any good, maybe they'll get turned into a blog.