WH messaging about its base 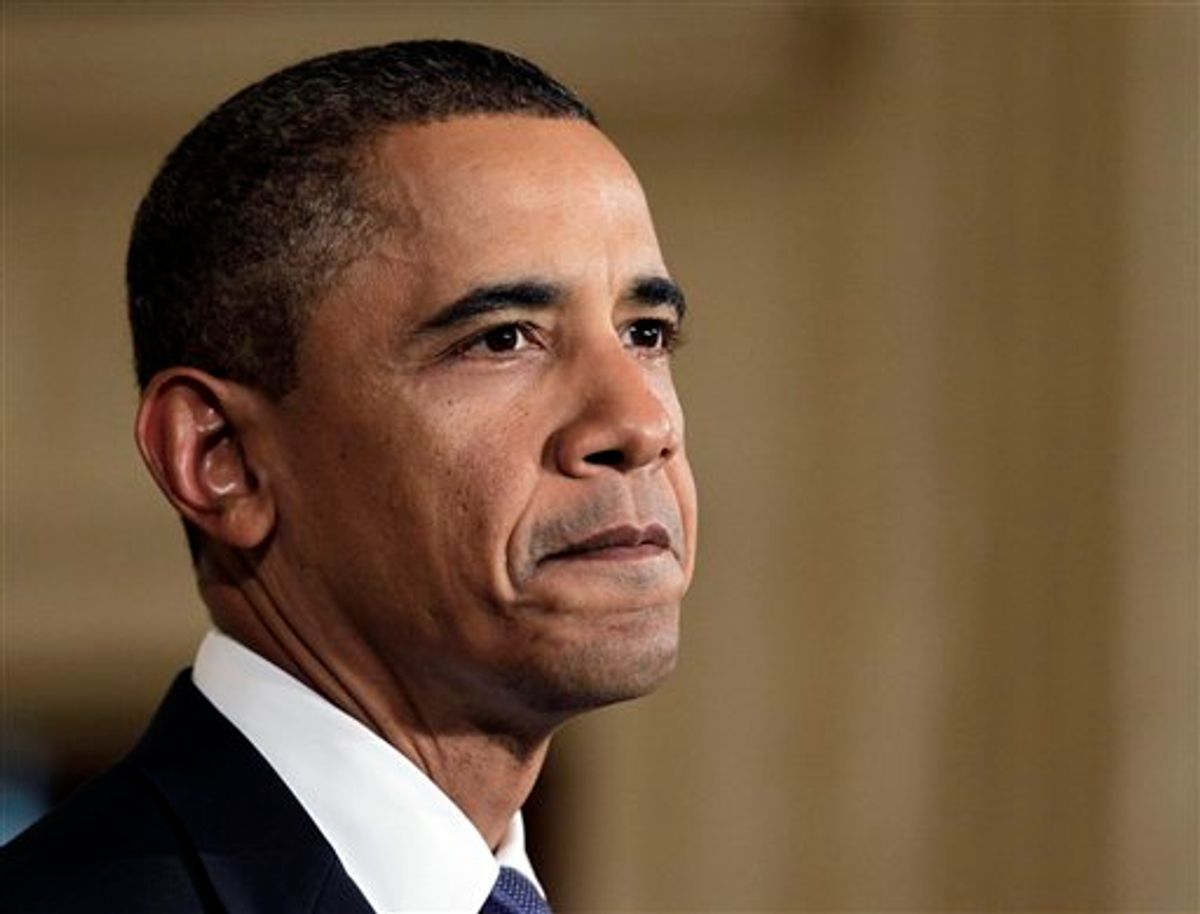 President Obama gave an interview to Rolling Stone and actually said this:

The idea that we've got a lack of enthusiasm in the Democratic base, that people are sitting on their hands complaining, is just irresponsible. . . . .If we want the kind of country that respects civil rights and civil liberties, we'd better fight in this election.

This may be one of the most audaciously hilarious political statements I've read in quite some time.  The Holder Justice Department's record on domestic civil rights enforcement is actually one of the few areas where there has been substantial improvement -- and that's a perfectly legitimate argument to make -- but for Barack Obama to cite "civil liberties" as a reason why Democratic apathy is "just irresponsible," and to claim with a straight face that this election will determine whether we're "the kind of country that respects" them, is so detached from basic reality that I actually had to read this three or four times to make certain I hadn't misunderstood it.  To summarize Obama's apparent claim:  the Republicans better not win in the midterm election, otherwise we'll have due-process-free and even preventive detention, secret assassinations of U.S. citizens, vastly expanded government surveillance of the Internet, a continuation of Guantanamo, protection of Executive branch crimes through the use of radical secrecy doctrines, escalating punishment for whistleblowers, legal immunity for war crimes, and a massively escalated drone war in Pakistan.  That's why, as the President inspirationally warns us:  "If we want the kind of country that respects civil liberties, we'd better fight in this election."

Speaking of inspirational messaging, Vice President Joe Biden yesterday said we must "remind our base constituency to stop whining."  Last week, Obama condemned "Democrats griping and groaning," and the day before he mocked Democrats who "just congenitally, tend to get -- to see the glass as half empty."  That, of course, was preceded by Robert Gibbs announcing that liberal critics of the President who complain about continuation of Bush policies "need to get drug tested," while Rahm Emanuel had previously shared his view that dissatisfied liberals are "fucking retarded."  Echoing those sentiments almost verbatim, Matt Yglesias called this week in The Daily Beast for a "little less whining and a little more cheerleading from the left," and accused those who fail to comply of "self-pity and self-indulgence" on the ground that the enthusiasm gap could jeopardize gains in health care coverage.

Obama supporters often claim that those who object to this White House messaging are reacting emotionally and personally because they're "offended" by these criticisms.  Speaking only for myself, that has nothing to do with any of this.  I'm not the slightest bit "offended" when Obama officials and their apparatchiks voice these accusations.  They have the same right to condemn their critics as their critics have to condemn them, and it's hardly a surprise that Obama officials harbor these thoughts about the "left."  Contempt for the left is one of the unifying beliefs of the Washington establishment, which is why most conventional establishment journalists -- Maureen Dowd, Ruth Marcus, Dana Milbank -- cheered Gibbs' outburst about the "Professional Left."  None of that is new; none of it is a surprise; and none of it is "offensive."

What is notable about it is what it reveals substantively.  The country is drowning in a severe and worsening unemployment crisis.  People are losing their homes by the millions.  Income inequality continues to explode while the last vestiges of middle class security continue to erode.  The Obama civil liberties record has been nothing short of a disgrace, usually equaling and sometimes surpassing the worst of the Bush/Cheney abuses.  We have to stand by and watch the Commander-in-Chief fire one gay service member after the next for their sexual orientation.  The major bills touted by Obama supporters were the by-product of the very corporatist/lobbyist dominance which Obama the candidate repeatedly railed against.  Rather than take responsibility for any of this, they instead dismiss criticisms and objections as petulant, childish, "irresponsible whining" -- signaling rather clearly that they think they're doing the right thing and that these criticisms are fundamentally unfair.

That is what makes these reactions significant:   not that anyone's feelings are hurt by the name-calling, but that they believe that this record merits gratitude rather than valid condemnation, and that anger over the state of the country is nothing more than irresponsible whining.  It's fine to tout accomplishments and try to unify the base behind them -- it's election season and they ought to be doing that -- but it's just mystifying that they think they're going to accomplish anything other than feeling better about themselves with these incessant, name-calling attacks on those who are dissatisfied with their behavior -- their policies -- in power.  Talk about "self-pitying and self-indulgent."  It's just amazing to read about how union members are reluctant to work for Democratic victory because of the economic suffering they are experiencing -- or how young, first-time and minority voters see little reason to work for Democrats -- and then hear Joe Biden dismiss those concerns as "whining" and Obama deride them as "irresponsible."  Democratic voters aren't unenthusiastic because they're reading too much blog criticism of the President; they're apathetic because they see what has happened in their own lives over the past 2 years and see little reason to work for those who have been in power during that time.

And it's even more baffling that they seem to believe that insulting their disappointed supporters -- rather than addressing the source of their critiques or, even better, doing something about them -- will generate enthusiasm to go vote.  As the very same Matt Yglesias wrote in the wake of the Gibbs' controversy:

I think Robert Gibbs needs to be drug tested if he thinks whining about liberal critics in an interview with The Hill is going to help him or Barack Obama in any way.

The same must be true of Obama and Biden using increasingly strident and petulant language to condemn those who are deeply dissatisfied with their performance in office.  It's difficult to imagine Obama and his aides attacking the Democratic base this way if it were Obama running for re-election.  Obama officials aren't stupid:  they must know that insulting disaffected Democrats and deriding their concerns as "whining" is not an effective get-out-the-vote strategy.

What's going on here seems clear.  Each time there is a Democratic loss on the horizon, White House officials find someone to blame other than Obama; that happened with Martha Coakley, Creigh Deeds, and a whole slew of other Democratic defeats.  By incessantly complaining now about the "irresponsible" "whiners" who aren't sufficiently grateful to the Obama White House, they seem to be setting up in advance a nice excuse for Democratic defeat in November:   it wasn't anything we did to cause this; it was the fault of those whiny, unrealistic irresponsible liberals who didn't cheerlead loudly enough.   What seems to matter most is that Obama be exonerated for the Democrats' electoral woes, even though he clearly bears substantial responsibility for much of it.

The finalists for the 2010 Online Journalism Awards -- sponsored by the Online News Association and the School of Communication at the University of Miami -- were announced today.  Salon was named a finalist for "General Excellence in Online Journalism, Medium Site," while I was named a finalist (along with Kevin Drum) for "Online Commentary/Blogging, Medium Site" (for these three posts:  one on Afghanistan, one on Bradley Manning/WikiLeaks, and one on Elena Kagan).  As the announcement notes:  "A team of 12 journalists representing a diverse cross-section of the industry met at the university's Coral Gables, Fla., campus and seven more conferred internationally to select the finalists, which range from independent and nonprofit news and community sites to major media and international organizations. The winners will be announced at the 2010 ONA Conference and Online Journalism Awards Banquet on Saturday, Oct. 30, at the Marriott Renaissance in Washington, D.C."

UPDATE:  David Dayen has an excellent post on all of this:

I would just add that I've never seen a politician run an election with the message "Don’t be stupid, quit your bitching and vote for me."  This goes orders of magnitude beyond "Here are the stakes, my opponent would vote against everything you care about."  That at least has a certain time-tested quality.  That would make the election a choice and not a referendum.  But "vote for me, you simpletons"?  There's a reason that strategy has never been employed: because it's so insane to think that open berating would inspire a voter to action.

Read Dayen's whole post, as he also analyzes Obama's civil liberties "defense" in that Rolling Stone interview.   Also well worth reading is Blue Texan's critique of the White House's base-directed messaging, and suggestions for how it could be vastly improved.

UPDATE II:  Greg Sargent and Steve Benen both have smart, nuanced discussions of this controversy, and in particular draw important distinctions between the various factions of "critics on the Left," who are often misleadingly lumped in together.  Along those lines, Jane Hamsher -- always relevant to the WH v. Leftist critics discussion -- has her own insightful reaction to the administration's recent comments.