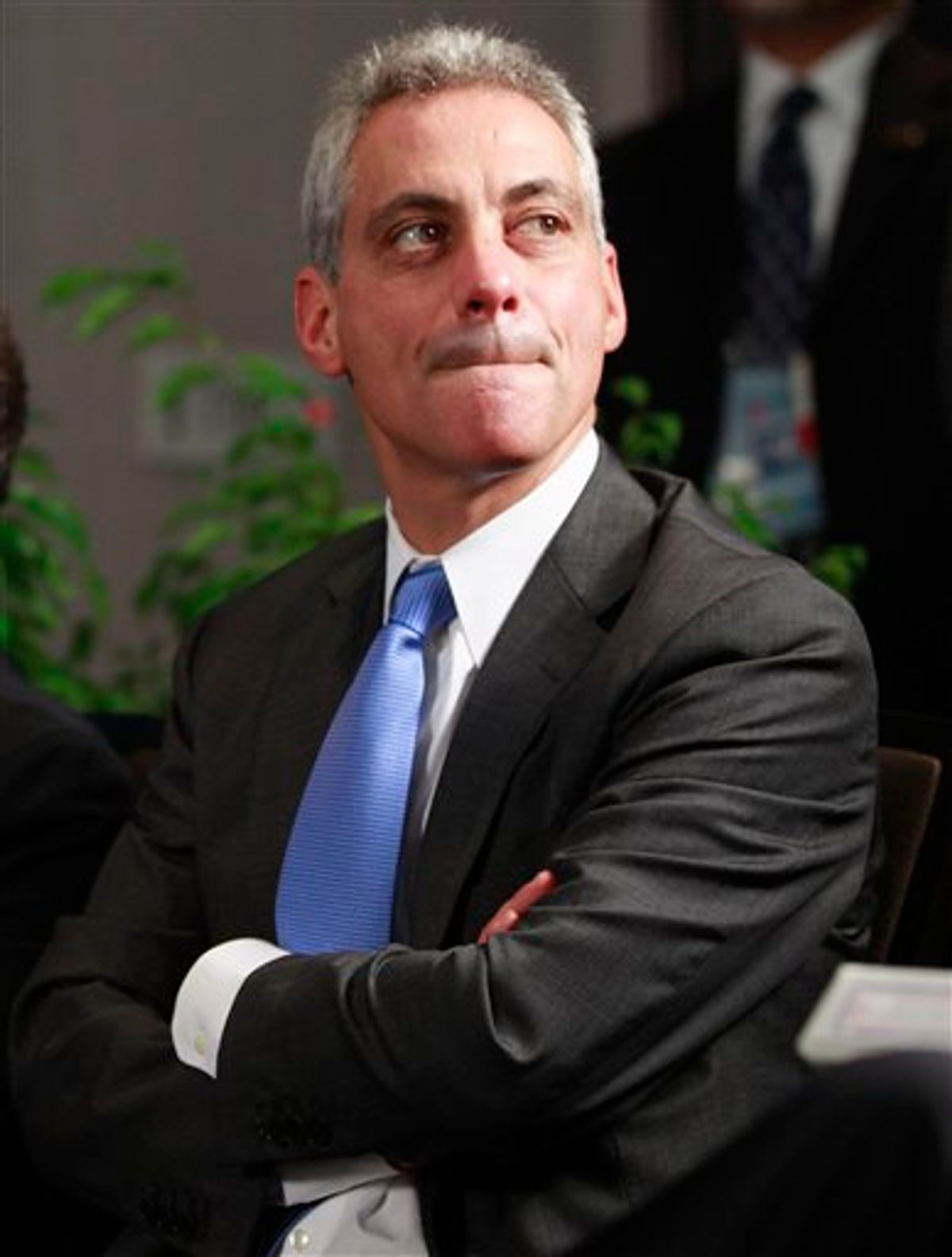 FILE - In this June 26, 2010 file, White House Chief of Staff Rahm Emanuel is pictured at the G20 summit in Toronto. The phones are ringing. Signatures are being gathered. And various groups are vetting who to support. If Rahm Emanuel is going to launch his expected campaign for mayor of Chicago, the clock is ticking on getting started. (AP Photo/Charles Dharapak, File) (AP)
--

Multiple outlets are reporting that Rahm Emanuel is set to leave as President Obama's chief of staff this Friday in order to run for mayor of Chicago.

Citing three sources, CNN claims that Emanuel, who represented a Chicago-based House district for six years before signing on with Obama, is telling colleagues that he's "all but certain" to pursue the mayoralty and that his associates are already assembling a campaign team. ABC News cautions that "no final decision has been made because of family considerations," but is also reporting that a Friday announcement is expected.

The decision is hardly a surprise. Ever since Richard M. Daley announced earlier this month that he'd step down as mayor next year after 22 years on the job, the question has been when -- and not if -- Emanuel would make his move. The initial expectation was that Emanuel would stay at the White House through the midterm elections, the customary jumping off point for top aides looking to leave a White House. But the mayoral field is quickly taking shape in Chicago, and in the last few days, pressure had been growing on Emanuel to make his intentions clear. Emanuel apparently got the message. Congress is due to adjourn this Friday.

While Emanuel made his desire to be mayor clear in an interview with Charlie Rose back in April, it's worth remembering that he also previously aspired to be the House Speaker -- and that after Obama recruited him for the White House, Emanuel seemed to be looking for a way to reclaim his House seat in the future in order to re-start his quest for the chamber's top slot.

After winning election to the House in 2002, Emanuel rose rapidly, thanks to his strategic savvy and his unparalleled ability to raise money. After the 2004 election, Nancy Pelosi reluctantly tapped him to run the Democratic Congressional Campaign Committee (she has a deep aversion to placing anyone whose loyalty she doubts in a leadership role). Emanuel was clearly a perfect match for the job, although the anti-GOP climate of 2006 made his job easy. When the Democrats took back the House, he was hailed as a hero by many in his party, and he parlayed the acclaim into the No. 4 spot in the Democratic leadership (as caucus chairman, leapfrogging John Larson, who had previously been muscled into the post by Pelosi).

Had he stayed in the House instead of teaming up with Obama, Emanuel might be facing quite a dilemma right now. If Democrats lose the House this fall, Pelosi is expected to step down as the party's leader -- and there's no obvious successor on the Democratic side. The speculation now is that the position would go to Majority Leader Steny Hoyer, largely by default (and possibly on an interim basis). In other words, this would have been the moment for Emanuel to seek the party's top slot in the House, thus putting him in line for the speakership if and when Democrats reclaimed the majority. But pursuing that opportunity would have meant passing on the suddenly open mayoralty.

Emanuel won't have to make that choice, though.