The dumbest attack on Paul Krugman, ever

The economist's prose may leave opponents bloody and broken, but he is not a warmonger 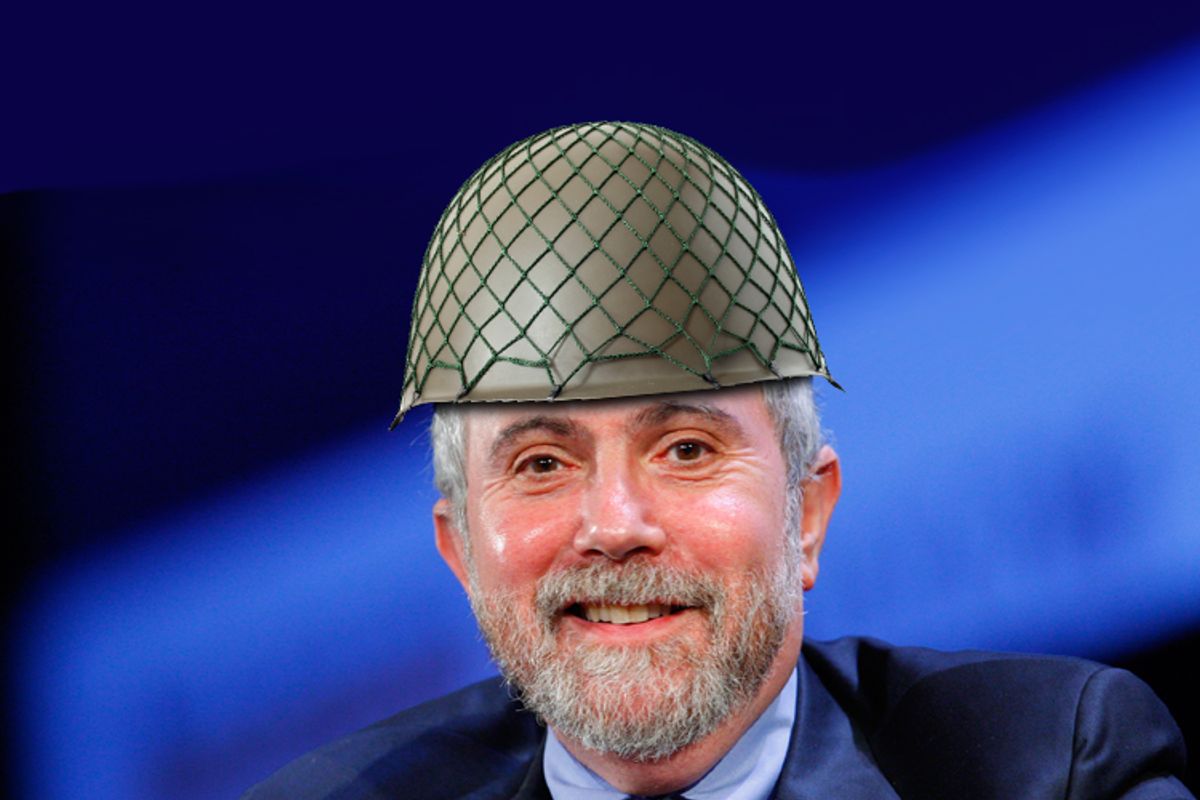 The first thing wrong with the blog post that Gonzalo Lira posted at Henry Blodget's Business Insider Tuesday morning was the title: "Is Krugman Actually Suggesting War As A Fiscal Solution?" Lira, a Chilean-American filmmaker seeking a second life as bomb-throwing econoblogger, wasn't asking the question -- he was asserting the premise as fact.

It's not the differences in policy prescriptions that I object to: It's Krugman's cavalier belief that a war -- a total, full-on war, with all its attendant fiscal spending -- is what saved the American economy from the Great Depression.

It's Krugman's disturbing, nihilist inference, which he makes over and over, tucked away in his articles, but always there, like a nasty aftertaste of a drink laced with a roofie: So maybe another total war might not be such a bad idea now, so as to get us out of this new Global Depression.

That is what I object to in Paul Krugman: He seems to be offering up another war as the only way to fix the economy.

Uh, no. The notion that World War II put an end to the Great Depression is certainly not controversial. But the accusation that Krugman is proposing that the U.S. go to war today in order to fix the economy is, and I don't write these words lightly, possibly the most ridiculous and reprehensible thing that any econoblogger has uttered since the outset of the Great Recession. In a post full of highly questionable assertions -- "Paul Krugman is clearly positioning himself for a role in the Obama administration" -- "he lacks a moral center of gravity" -- the characterization of Krugman as warmonger is breathtaking in its nuttiness. Krugman is pro-government spending, yes. But pro-war as fiscal policy? No.

Not long after DeLong's siren call rang through the blogosphere/Twitterverse, Business Insider pulled the post, with an accompanying note from economics editor Joe Wiesenthal.

The post that previously appeared at this URL by the writer Gonzalo Lira makes some claims about Paul Krugman's stance on war being necessary for the economy that we feel distort Krugman's actual stance.

You can translate that as, here at Business Insider, where we generally believe any pageview is a good pageview, and we're not afraid to stir it up, Lira's ravings were completely beyond the pale. Whoops!

If you're interested (and masochistic), you can read the original post at Lira's own blog, now under the title, "Why I Despise Krugman." Or you can read Krugman's own response to the brouhaha, in which he naturally reiterates his long-held Keynesian position that to get the economy moving again we need government spending -- on infrastructure, the safety net, outright job creation -- on a scale equivalent to what would otherwise be destructively wasted on war.

One last note -- Lira's Wikipedia page, when I checked it around midday Tuesday, included a rather strongly worded final paragraph:

Starting in 2010, Lira began contributing blog articles to Zero Hedge, naked capitalism, Seeking Alpha and Business Insider, despite have no economic background, no financial education, and no business experience in the financial markets.

I don't know if the accusations are true, and I don't really care -- there are plenty of self-taught bloggers thriving on the Internet who have useful and enlightening things to say. We all learn from each other -- it's the wonder of the Web. But the flip side of that interconnectedness is that it's kind of hard to escape your past. Neither Lira or Business Insider helped their "brands" today.