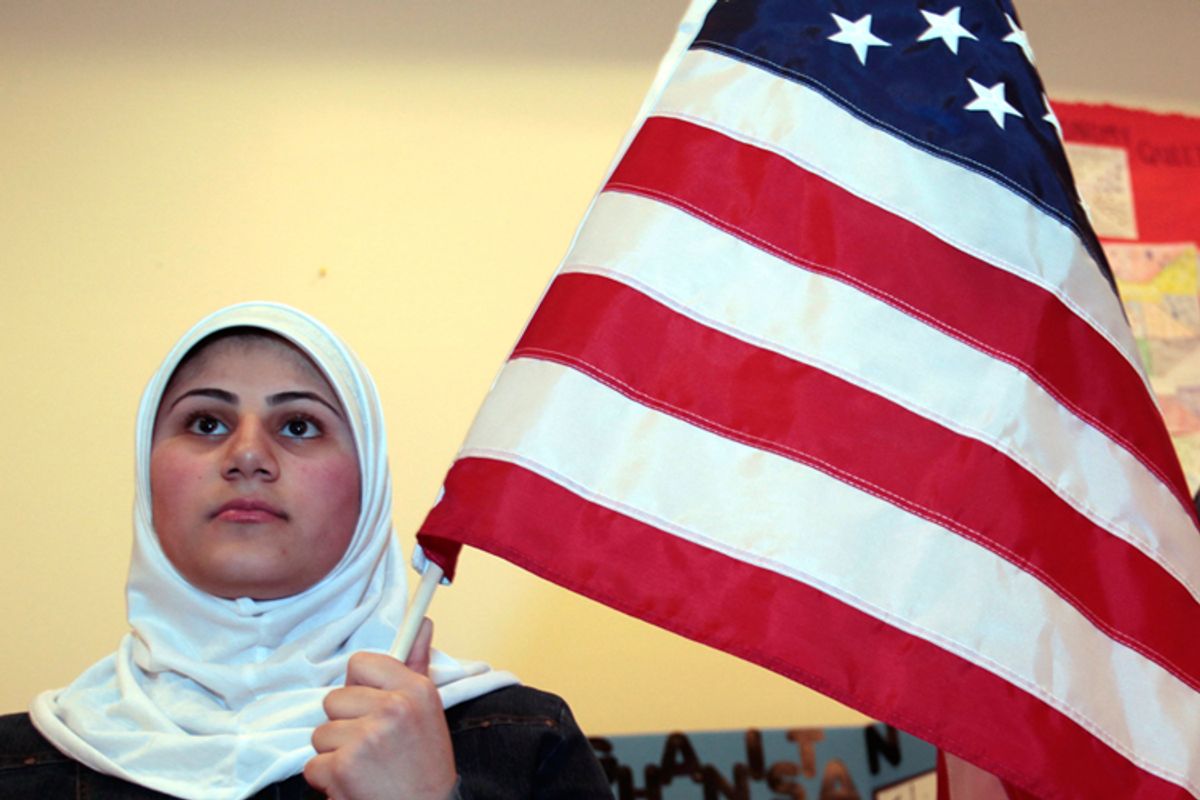 A young Muslim American woman holds the U.S. flag at the Islamic Center of America in Dearborn, Michigan on March 26.
--

With the volume of Islamophobia on the rise in the United States, a recent report prepared for Congress and new law enforcement data are shining fresh light on the significant role American Muslims play in foiling terrorist plots, particularly those of the domestic "homegrown" variety.

The report from the Congressional Research Service, sent to Congress with little fanfare on September 20, contends that soon after 9-11, American Muslims "recognized the need to define themselves as distinctly American communities who, like all Americans, desire to help prevent another terrorist attack" and explores how federal, state and local law enforcement organizations responded by tapping into American Muslims’ language skills, contacts, information and cultural insights.

CRS is a branch of the Library of Congress that conducts research on a confidential basis for members of Congress and committees. Its report was obtained by the Federation of American Scientists and released on September 24, but a CRS spokeswoman would not say who in Congress originally requested it.

Meanwhile, the Muslim Public Affairs Council has crunched FBI data, information in government press releases, and media reports on potential al Qaida-related plots and determined that since 9-11, Muslim Americans have helped thwart 11 al Qaida-related plots, nearly one-third of all such planned attacks that threatened the United States. (A vivid example of an American Muslim warning authorities of a problem: a Muslim was the first to report to law enforcement last May the suspicious vehicle in Times Square which turned out to be a dud car bomb.)

The cooperation from American Muslims is no secret to law enforcement officials, who have established, all the way down to the local level, formal and informal connections to American Muslim communities to cultivate the flow of intelligence -- like the Muslim Community Affairs unit of the Los Angeles Sheriff Department, established in August 2007. For their part, Muslim-Americans have established a litany of organizations to better understand and refute extremism, like the Muslim American Society’s "Straight Path Initiative," which focuses on rooting out potential extremism, particular on Muslims aged 15 to 30. The CRS report on American Jihadist terrorism contains a list of examples of American Muslim organizations established to rebut extremism and an appendix listing federal, state and local authorities’ efforts to work with American Muslim communities.

Bruce Hoffman, a terrorism expert at Georgetown University, agreed that the American Muslim community has played a crucial but often overlooked role in the fight against extremism, actively reporting to law enforcement about potentially dangerous developments. “We can’t expect the intelligence community to spot these aberrations on the fringe,” Hoffman said. “That work comes from communities who are best poised to work with the authorities to prevent problems from even surfacing.”

Ironically, the American Muslim community is simultaneously facing what seems to be a swelling wave of Islamophobia, fueled, in part, by specious rhetoric that fuses terrorism and Islam.

Earlier this month, columnist and birther Frank Gaffney, Rep. Pete Hoekstra, R-Mich., the ranking Republican on the Intelligence Committee, and others held a news conference on Capitol Hill to release a report on Muslim religious law entitled "Shariah: The Threat to America." That document alleges that Muslim adherents to Shariah law are categorically "making a determined, sustained, and well-financed effort to impose it on all Muslims and non-Muslims, alike."

"This is laughable. This is pure prejudice and fear mongering," is how Nihad Awad, executive directory of the Council on American-Islamic Relations, reacted to Gaffney’s report. "What they are presentingis contrary to Islamic ethics. They are just trying to scare people. This is the new McCarthyism. They are exploiting fear and public unawareness of Islam in general."

Some American Muslims are also frustrated by grappling with anti-Muslim sentiments while simultaneously working so hard against extremism and assisting law enforcement to root out terrorists. "Ironic doesn’t even begin to explain this," said Alejandro Beutel from the Muslim Public Affairs Council. He said Islamophobes are "failing to see who are the potential enemies and who are the potential allies." Beutel predicted, however, that this new evidence of American Muslims’ role in thwarting attacks wouldn’t change the minds of many Islamophobes, saying, "Nothing we do is going to be good enough for them."