Did chef Gordon Ramsay drive a man to suicide? 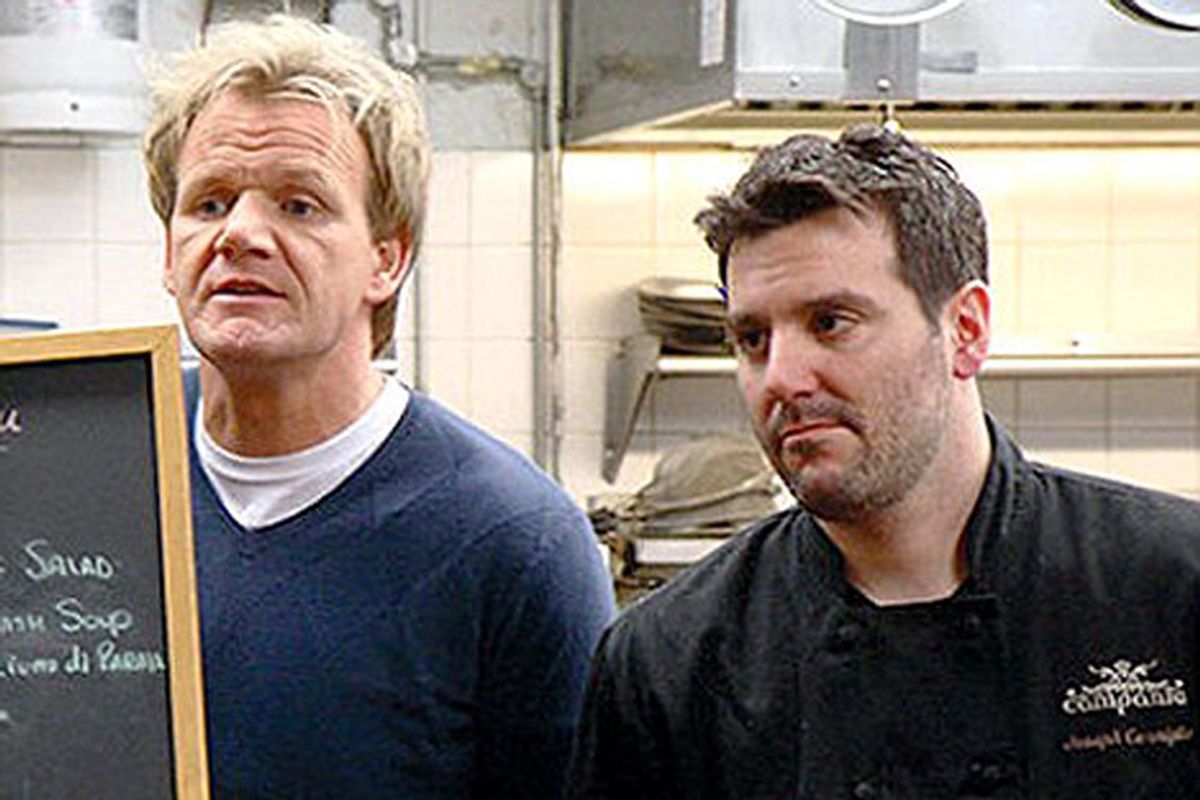 Has Gordon Ramsay become the leading cause of death in the restaurant industry? On Friday, 39-year-old restaurateur Joseph Cerniglia, who appeared on the celebrity chef's justifiably named "Kitchen Nightmares" three years ago, leapt to his death off the George Washington Bridge. Cerniglia was the second veteran of a Ramsay show to commit suicide; in 2007, Texan chef Rachel Brown  shot herself to death at her family home, one year after competing on Ramsay's "Hell's Kitchen."

Usually it takes three of anything to make a trend in the media, but why wait? As quickly as the news of Cerniglia's death broke, finger pointing about Ramsay's accountability began. The New York Post referred  to Cerniglia as "at least the second chef who appeared on one of Ramsay's reality series to have killed themselves." It's not like they're flat out suggesting there may be dozens more innocent caterers and restaurateurs whom Gordon Ramsay has driven to suicide with his spiky hair and verbal abuse, but ... you never know.

Le Bernardin executive chef and occasional "Top Chef" guest judge Eric Ripert, meanwhile, took to Twitter to scold, "Nothing personal against Gordon Ramsay but he is a poor inspiration for professional chefs in his shows. Who perform [sic] better scared, insulted? I have my bad days to [sic] but always try to improve. TV or not it's no excuse! Ultimately I believe in the goodness of Gordon but he is very wrong." He's not blaming Ramsay, he's just saying, nobody on "Top Chef" ever jumped off a bridge. And if you want to throw a little more blood on Ramsay's hands, how about the widely reported fact that among the zingers he hurled at Cerniglia was the warning, "Your business is about to fucking swim down the Hudson." It's practically like he was ordering him to do it.

Ramsay may have built a career by being a savvy food industry professional, but he's gained his true fame for being a total jerk. His tantrums and tirades made him perfectly suited for reality TV, which thrives on dramatic, larger-than-life characters. You want a show about someone who offers support and hugs? Go watch Oprah. When those free-range chickens come home to roost and people start dying off, it's easy to cast a guy like Ramsay, who gracefully stated on Wednesday that "I was fortunate to spend time with Joe during the first season of 'Kitchen Nightmares.' Joe was a brilliant chef, and our thoughts go out to his family, friends and staff," as something even more sinister than acid-tongued hothead. Don't look into his eyes, America -- it'll make you commit unspeakable acts of self-violence.

But the entire reality genre (not just Ramsay's oeuvre) thrives on high stakes and troubled participants. The annals of dating competitions are littered with domestic abusers. In 2005, 23-year-old Najai Turpin shot himself in the head after appearing on the boxing competition show "The Contender." In 2008, former "Supernanny" single dad James Scott Terrill died of self-inflicted gunshot wounds. Last month, "American Idol" champ Fantasia Barrino was hospitalized after a suicide attempt. And while reality television attracts volatile characters, so likewise does the restaurant industry. In 2005, acclaimed French chef Bernard Loiseau committed suicide shortly after losing a star in the Michelin guide. When Cerniglia appeared on Ramsay's show, his business was floundering, he was over $80,000 in debt, and as he told Ramsay, "I can't see us going on another year." Though he was able to keep his New Jersey restaurant afloat, a turnaround he credited Ramsay for, he was hospitalized and subsequently arrested for cocaine just this past July.

Does appearing on a reality show assure a person of a future involving mental illness, arrests and possibly early death? Of course not. Does working in a restaurant industry guarantee that a person will self-destruct? No (although food service has one of the highest suicide rates of any profession). Being on TV or handling food won't make a person kill him or herself. It is, however, entirely plausible that a person who gravitates toward being on TV and working in the intense, high-pressure world of restaurants is a person who is likelier than average to have those tendencies. Getting yelled at, even by Gordon Ramsay, never killed anybody.