The tinkerer of Skywalker Ranch announces plans to bring all six films back into theaters. Will it ever end? 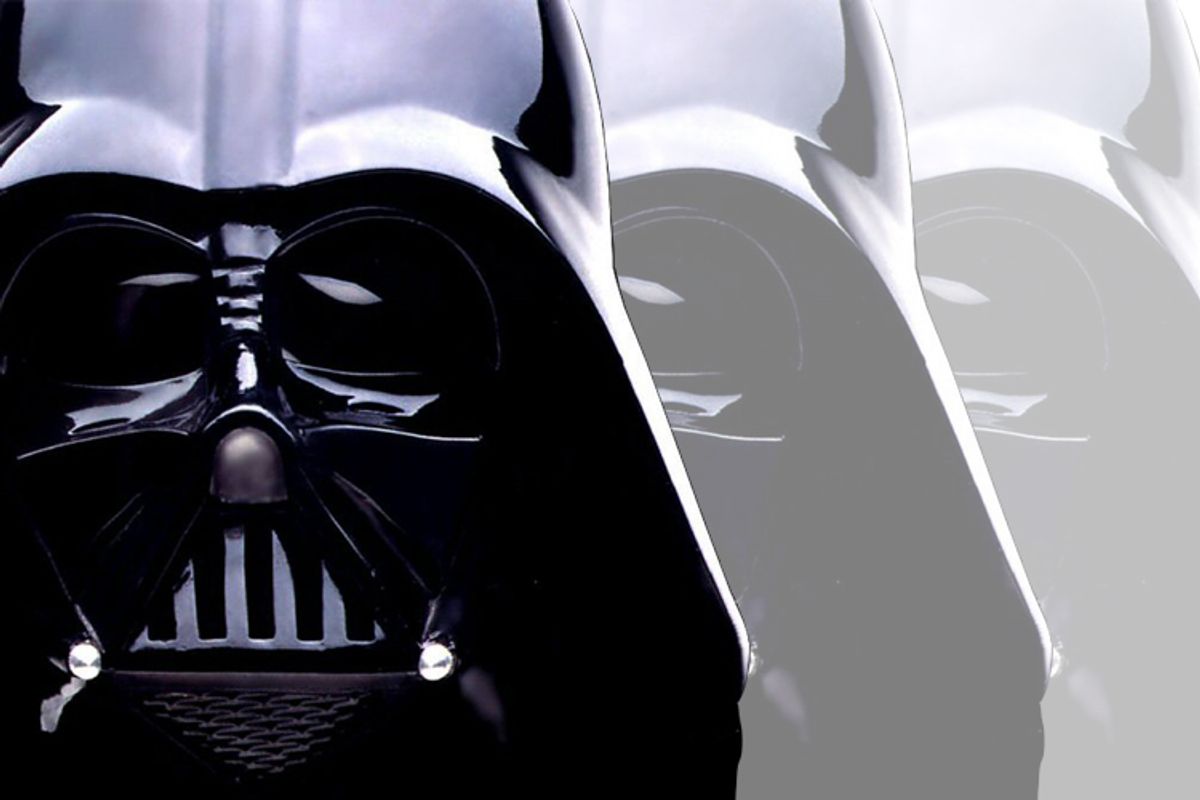 Some embloggers and speloggers contented themselves with disseminating the Founding Genius' surprisingly old-fashioned porn fantasies involving Natalie Portman as Padmé and zany bounty hunter Boba Fett (Stephen Colbert), or his "Cage aux Folles"-style reboot of the relationship between Han Solo and Lando Calrissian, now played by undead actor Barack Hussein Obama, beloved Islamic spokesbot and (according to supermarket tabloids) "president" of the United States in pre-Reconciliation times. But didn't anybody besides me feel like Lucas' heart wasn't in it? (Not that he still has one, ha ha.) Maybe it was the way he kept V-muttering, "Exterminate all the brutes." Reference to a SimDisney theme-park ride and before that a 1990s splatterpunk thriller, I realize. Just mental clutter. Still, it was kind of odd.

Ladies and dudes, if you think that's lame faux-news, check out today's announcement in the depressing "real world" that Lucas will begin rolling out 3-D versions of all six "Star Wars" features, beginning in 2012. He will start, of course, with "The Phantom Menace," the canonically correct "first" (i.e., fourth) film, which was more than craptastic enough in 2-D. As someone in my Twitter feed observed minutes after the announcement, that debate in the Galactic Senate, or whatever it's called, is going to be so, so riveting now! And I don't know about you, but I'm hoping for some as-yet-unseen Jar-Jar Binks reggae-dance outtakes.

This presumably puts the re-rerelease (unless it's the re-re-rerelease) of the original 1977 "Star Wars" -- sorry, "Star Wars: Episode IV -- A New Hope" -- in summer 2015, when Lucas will be 71 and many of his original fans will be taking their grandkids to the movie. But hell, 71's not that old these days, and George looks to be in good health. Do we think he's done fiddling after 2017? Nah. We just don't.

As my Salon colleague Matt Zoller Seitz recently discussed, filmmakers are famous tinkerers, OCD-minded control freaks used to getting their way. Terrence Malick will evidently never be done making "The New World" until the day he dies, and I have to disagree with Matt on that one: The movie's not getting any better. But Lucas belongs in a class by himself. This might be the one and only point of comparison between Lucas and the great Anglo-American novelist Henry James: They can't keep their mitts off their own work, and they have no idea when enough is enough.

Between 1907 and 1909, James published the 24-volume "New York Edition" of his novels and stories, which included new versions of popular works from earlier decades, including "The Portrait of a Lady," "What Maisie Knew," "The Turn of the Screw" and "Daisy Miller," often extensively rewritten in the verbose, florid style of James' later years. Of course the parallel is not exact; this was James' personal, eccentric, interior version of 3-D, you might say. But here's the part Lucas might want to pay attention to: Nobody needed to read rewrites of books they'd liked just fine the first time, and they didn't sell. The New York Edition has its defenders, but as James put it, "that Edition has been, from the point of view of profit either to the publishers or to myself, practically a complete failure."

Now, unlike Henry James, George Lucas is not short on cash. He's not thinking about the bottom line; he's thinking about his legacy as an enduring popular artist. He's imagining hordes of young people -- who've only seen the "Star Wars" movies on DVD, or have never seen them at all -- lining up on the streets of L.A. and New York and suburban Ohio in Wookiee and Vader costumes. That's a seductive, devil's-candy vision, and for someone who was so influential in shaping the consciousness of several turn-of-the-century generations, I guess it's an irresistible one.

But just because I think it's kind of clueless and pathetic that Lucas is hitching his wagon to the fading star of 3-D -- whose brief reign as box-office panacea is already over -- doesn't mean it won't work. Critics will act superior, and disillusioned old-school fans will ramp up their mockery and piracy, like online rebels intent on destroying the Death Star. I don't know how much that matters to the isolated tyrant of Skywalker Ranch. It must matter some. But it won't deter him.

I suppose Lucas genuinely believes he hasn't quite gotten these movies right, and that if he keeps trying he still might. But there's also a certain sense in which he reminds me of a less lecherous version of Humbert Humbert, the pedophile hero and narrator of Nabokov's "Lolita." He is willing to give up everything, his pride, his good name, the integrity of his work and the trust of his oldest and most passionate fans, just to get inside the heads of another generation of 11-year-olds.

Special thanks to Matt Zoller Seitz for inspiration and collaboration.