What do we tip waiters for?

A veteran server reveals how we really don't care about the service when we tip, and how he makes more money 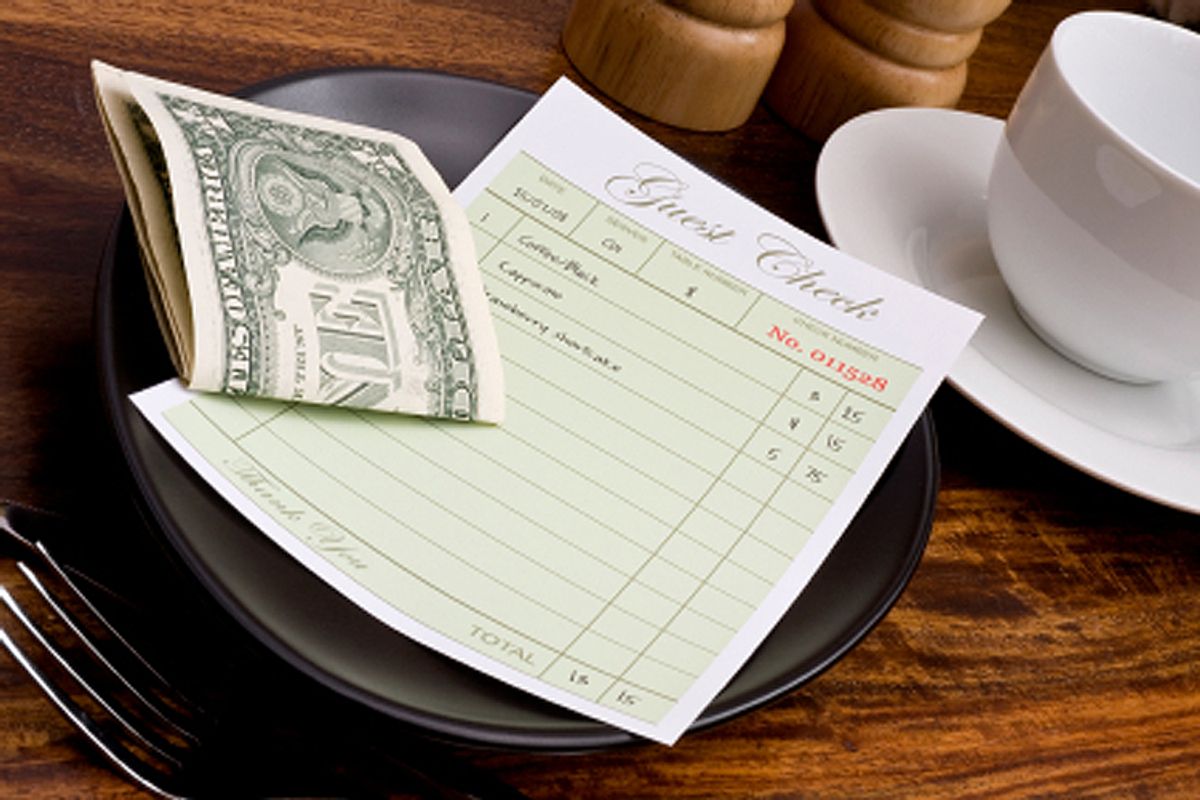 Nearly anyone will tell you that they tip their servers depending on how well they've been treated. It's an easy transaction: be nice to me, be efficient, and I'll give you more at the end of the meal.

Only it's not really so simple. Have you ever found yourself tipping a server differently because they were good-looking? Or because you were embarrassed by your dad's off-color jokes? Or even because they sassed you, but they sassed you in all the right ways?

While writing the story yesterday on the very odd (and, to my mind, very disturbing) relationship between the abusive customers and staff at a Chicago hot dog stand, I recalled an old waiter friend telling me that he liked to approach his tables with an aloofness, but also with charm, so that they would work to win his approval ... and that usually meant a bigger tip.

So I called Steve Dublanica, author of the blog and book "Waiter Rant" and the forthcoming "Keep the Change: A Clueless Tipper's Quest to Become the Guru of the Gratuity," to talk about the relationships -- and strategies -- of tippers and tip-getters.

OK, well, first of all, do pleasant, efficient waiters get better tips?

When I was a waiter, I cultivated a friendly arrogance. That was my M.O. [laughs]. A good waiter adapts to every personality. There are people who like the archly reserved waiter, ones who like someone who will kid them a bit and give them a slightly hard time. Others who like the joke waiter, the entertainer.

But the thing that's always amazed me is that the quality of service has almost no effect on tipping. When I first started out, I thought, "If I'm nice and efficient, people will tip me well!" Not true!

When I was researching for my book, I read a reader survey by Zagat where 80 percent of people said, "I tip based on the quality of service," but self-reported behavior isn't always true. No one's going to say, "My girlfriend left me, I'm in a bad mood, and I'm a cheap tipper." But a study by Professor Michael Lynn at Cornell found that the customer's perception of service affects the tip only 2 percent of the time. He said, "Service affects tipping as much as whether the sun is shining outside or not."

If you've waited tables, you know this is true. I learned this on the job years ago. You can give people amazing service and they'll stiff you. You can give them horrible service, and they can give you a great tip. There's no rhyme or reason to it. If only 2 percent of the tip is based on the service, what are the other 98 percent doing? If they're not tipping on service, they're tipping on psychological processes that are happening.

So what do people base their tipping on?

I knew a waiter who was a drug addict. He didn't bathe a lot. He would come up to the table and people would say, "This guy smells!" They still tipped him. Waiters can be pleasant, they can be unpleasant, and that will have almost no effect on your tip. People will often still leave you that 15 to 20 percent.

But if your tips don't reflect the quality of the job you do, why does any waiter bother?

First, if you're a professional, you'll try to do a good job for the sake of doing a good job. That's a matter of pride.

If customers get badly treated at a place, they will still tip -- maybe even tip well -- but they won't come back. So there are external controls. Some waiters say, "I don't need to be nice. I don't need to put on a show." But management might watch you, they might put on the pressure for you to perform. Your service will influence people's return patronage.

Where waiters can make better money is if they cultivate a stable of regulars, people who they know are good tippers. You remember their favorite wine, their anniversary, their favorite table. You make them feel special so they'll feel loyal to him or her. Smart waiters know that even if there's no rhyme or reason to how people tip, they know there are people who tip well, so they try to get them to come back and to improve the odds in their favor. If you're supposed to be kind of diffident, kind of rude, then you'll do it. If you're supposed to be a joke teller, then you'll do it.

And being a good tipper will improve your service, because we will remember you. One customer would tip me $200 to $300 at the holidays, and she never had a problem at my restaurant. She could call me on a busy Friday, and I would move heaven and earth to get her a table. You don't care why they're good tippers, but you want them in your section.

Something that's interesting to me in this conversation is that we keep using the tip as a sort of proxy for how satisfied the customer is with their experience. But since studies show that's not actually an accurate indicator, how do you then gauge how happy a customer is with you? How do you develop customers' loyalty?

You have to feel out every table from the beginning, and figure out what they want. Some people like a little repartee, a little battle of wits. Some really like to have their chains pulled. Some are trying to win the waiter's approval.

In those cases you play it like a girl playing "hard to get." Because they want to say, "This waiter was difficult and I turned them around, because I'm so good at dealing with people." That's what the customer wants from that experience. They're looking for the waiter's approval, not for their service. There's a psychological need that the customer is trying to fulfill. In my first book, I write, "You have to find a customer's personality and mine it for all it's worth." If you can tell the customer wants you to be their friend, you have to play hard to get, and come around in the end so they'll leave happy.

Why do some people like to be abused, or like an aloof waiter? Some people like that. And some people like being whipped, dragged on a chain and told they're a bad boy. You'd need far more psychological experience than me to figure that out. When I go out to eat, I want my waiter to take my order, bring my food and be nice.